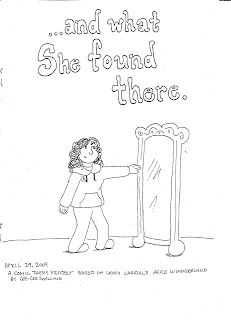 Unlike Isaac, I have never taught a course in comics-making, though I have occasionally included comics projects as an option within a creative-writing unit in more general literature classes. Well, I gotta kvell: a student who produced a short autobiographical piece for my introductory literature course back in fall 2006 recently completed her BA in Literature with a creative-writing senior capstone thesis, and her medium was the minicomic. So here are a few panels from ...and what She found there, the debut work in comics of Cee-Cee Swalling.

At first, Cee-Cee had thought about adapting Alice in Wonderland into comics. Cee-Cee was in my comics class back in fall 2007 when guest speaker Paul Karasik gave a terrific lecture on various literary adaptations into comics, which included some discussion of the classic MAD adaptation/parody of Alice, and I know Cee-Cee had explored some other prior comics adaptations of Alice as well. Ultimately, though, she chose a different tack: autobiographical material filtered through the language and images of Lewis Carroll's two Alice books.

The current edition of ...and what She found there includes four stories, three of which are based on episodes from Cee-Cee's life, from childhood to summer 2008, and a fourth of which abandons autobio but keeps the conceit of using Carroll's work to reflect contemporary American concerns. Her adaptive methods vary from story to story. Thus, the opening story uses the exact language of the poem of Tweedle Dum and Tweedle Dee to narrate a scene from Cee-Cee's childhood squabbles with her little brother: 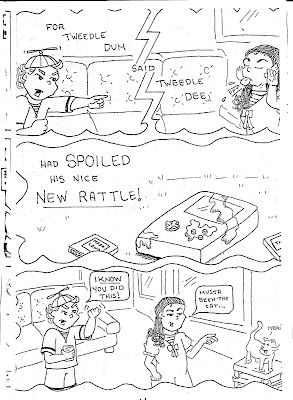 The story takes a surprising but effective turn with the sudden arrival of the "monstrous crow" from the poem, which takes on a very different form in the comic as the symbol of a family health crisis. The new context that Cee-Cee brings to the poem adds a surprising depth to it without dismantling the poem's playful tale of youthful quarreling.

The second story, adapting the great poem "Jabberwocky," is not drawn directly from Cee-Cee's life. Instead, it adapts the poem by splitting its text between two parallel timeframes: a quasi-medieval portrayal of a young knight who confronts the literal Jabberwock monster alongside a contemporary depiction of a College Democrat who casts a vote against the metaphorical Jabberwock of the McCain-Palin ticket. Here's the big battle scene in the voting booth and in the tulgey wood: 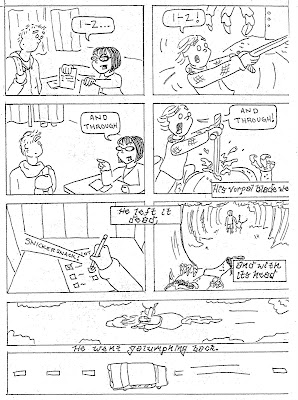 (There's a full-body portrait of the Jabberwock on the previous page of this story.)

The fourth and final story, "Off with her head!", offers still a third kind of adaptation—more of a riff on a theme than a direct translation of Carroll's plots or language. Here, Cee-Cee examines how both she and her mother seemed at times to exemplify the behaviors of the imperious queen of Carroll's books, even as Cee-Cee herself sought release in the fantasy worlds of reading and the imagination. She writes in her own voice, though with numerous visual echoes of the Alice books. Her method in this story seems closer to that of Alison Bechdel in Fun Home: allusive, intertextual, and reflective about the role of reading and referentiality in coming to understand oneself: 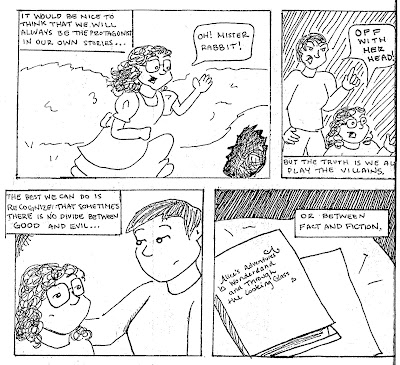 All in all, I think it's work that Cee-Cee should be proud of, and I am proud to have followed this project from its earliest stages. She's still expanding it, I'm told, and with any luck she'll have copies to hawk from a corner of the Satisfactory Comics table at MoCCA in a couple weeks' time. In the meantime, or if you can't make it to MoCCA, by all means visit her blog at ceecendesist.blogspot.com, where you can read the first versions of several of these stories and some other comics work, as well.
Posted by Mike at 4:47 PM

I think Cee-Cee should get a prize for the finest use of "snickersnack" in a century...what an interesting work!

I'm looking forward to getting a copy of this. It looks like really smart stuff.

How much advising did you do on this project, Mike?

I worked on this project primarily with Wenthe and one of my peers, Mark Almy, who was writing a creative short story. Both were wonderful advisers to the project and I certainly benefited from their advice.

Wenthe and I spent many office hours trying to figure out the readability of panels and he was particularly helpful in the Jabberwock project. I took his suggestion of creating a large panel of the Jabberwock and I think it came out really well. That whole page bothered me for a long time but we worked through it a couple times and I have to say it's now definitely one of my favorite pages!

The last story I sort of sprang on the world at the very last second, but as Wenthe pointed out there is certainly a Bechdel theme there. _Fun Home_ was the first "graphic novel" I read, coincidentally in Wenthe's Literary Imagination class three years ago, so it's easy to say this project has some longevity to it!