Isaac is in a bit of a rush tonight, so I'll be making tonight's post without his textual input. But I'm happy to report that Isaac has provided a delightful, Mother's Day-appropriate contribution to this week's Doodle Penance, on the theme "awesome old folklore": 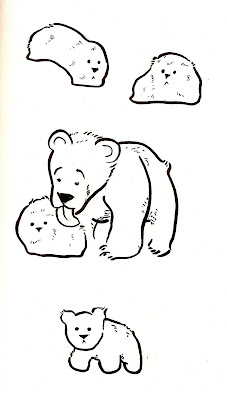 Naturally this drawing portrays the old tradition that bear cubs are born as shapeless lumps that their mothers lick into bear shape. Neither of us can quite remember where he first heard this bit of folklore; I think I may have read about it in a discussion of medieval bestiaries, Isaac thinks he may have found it in Shakespeare or from some other poetic source. Whatever the source, the result is one of Isaac's cutest drawings ever.

My drawing is neither cute nor Mother's Day-appropriate, but it does have a poetic origin. Here's my beastie: 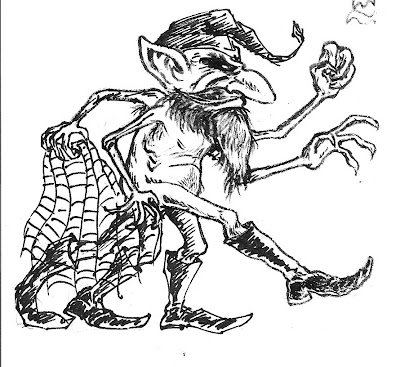 The bit of awesome old folklore I took for my inspiration is an Old English charm for use against dwarf sickness. The text of the charm itself, in Old English and in modern English translation, can be found here. Some interesting commentary and speculation on how to interpret its enigmatic verses may be found here. Unfortunately I didn't have a chance to consult my own Old English books today, so I won't offer further comment on the verses, other than to say that I adopted the interpretation that sees the dwarf taking spiderish form and clutching a web with which to snare its (sleeping?) human victim.

I'll also note that my own drawing disturbs me a little bit in what it recalls to my eye. As I drew it, I was consciously thinking of Arthur Rackham's fairytale illustrations and Matt Wagner's renditions of the redcap fairies, but I think there was an unconscious influence, as well. Something about the spider-wight's purposeful stride and his flowing beard reminds me uncomfortably of this Nazi image of the Wandering Jew. Since I'm Jewish myself, my discomfort speaks for itself, though I guess something could be said too for the effectiveness (for good or ill) of a powerful graphic design.
Posted by Mike at 10:34 PM

What do you think? If I designed a t-shirt of the cub-grubs, would people want it? Imagine them set up in a horizontal layout.

I think maybe you should add the mother bear licking to each of the unformed shapes, except a final one of the newly formed cub walking off. But it's a very tee-shirt worthy concept.