Doodle Penance Postscript: More than one way to skin a rat

In yesterday's Doodle Penance, I noted that would-be imitators of Chris Ware's cartoon wolf might need to scalp a famous cartoon rodent. I did not name that rodent, but I thought it might be interesting to note some other cartoon rodents, questionably famous, that bear a resemblance to my example.

First, there is the astonishing appearance of these giant rats in Osamu Tezuka's early manga Metropolis (inspiration for the 2001 anime): 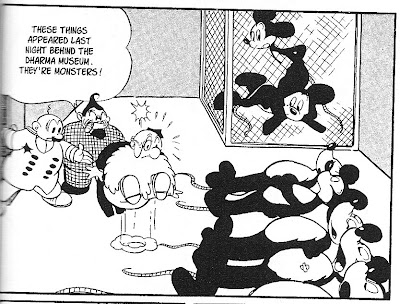 They're monstrous, all right, but no mistaking their ultimate source, as their scientific name reveals: 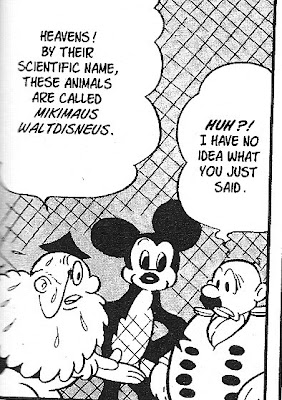 Chances are that Tezuka's work here was itself an unrecognized source of inspiration for me in my doodle, given the fate of the giant rat in these panels: 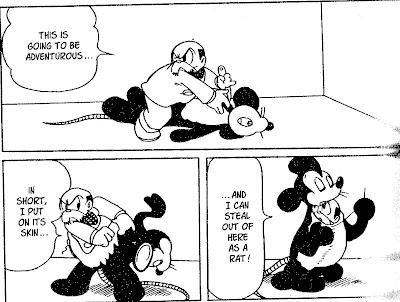 There's even a final panel where the head dangles ready for further scalping: 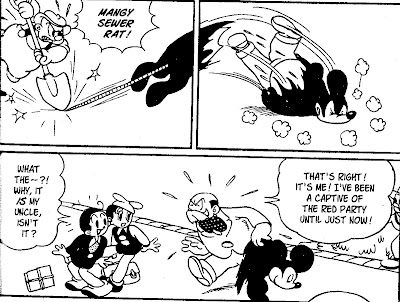 It's a pretty remarkable ripoff of M.M., but perhaps less so than Foxy, the animated character from the first Merrie Melodies cartoons who resembles M.M. in almost every detail apart from the bushiness of his tail and the pointy tips on his round ears. If you haven't yet laid eyes on Foxy, you should really click on that link. Seeing is believing, though it's hard to believe that Disney was able to tolerate the rival character.

My last example of a seemingly-scalped cartoon rodent is good old Mickey Death, the skull-headed curmudgeon whose adventures were chronicled by Eric Knisley and Kevin Dixon.* I first encountered Mickey Death in a free paper I picked up somewhere in the Triangle (either Durham, N.C., or Chapel Hill, I forget which) back in the early '90s. You can read about M.D.'s exploits here, or try to snag a print copy of the collection Mickey Death and the Winds of Impotence from lulu.com here (it's cheap as free)—or perhaps you could do as I did and buy a copy direct from co-creator Eric Knisley, should you be lucky enough to find him at a con.

*Click here for a Boing-Boing roundup of images of skull-headed Mickey clones, where a nice drawing of Mickey Death is the second of eight such images (so far).
Posted by Mike at 8:07 PM

There were apparently a lot of wartime Japanese cartoons which had Mickey Mouse leading the US armed forces, so I think Tezuka's use of Mickey here might come out of that tradition as well as his own evident fondness for Disney.

Fascinating! I knew (from the epigraph to Maus II) that Nazis vilified Mickey, but I didn't know that there was a similar Japanese equation between Mickey Mouse and US identity more broadly. Thanks for the comment, James!