Our Contribution to "Covered"

If you're clicking over to our blog from the "Covered" project, I hope you'll stick around to check out our big summer back-issue sale and maybe some of our ridiculous "Doodle Penance" posts.

(And if you haven't heard of "Covered," I highly recommend it as a cool place to see people manipulating and laying claim to the powerful imagery of other people's comics covers.)

You might be curious to know how we chose our contribution, and why our image looks so little like the original Walt Simonson cover for Batman #366. We actually worked up two submissions for "Covered," and the one they ran was our version of the cover of the first comic book Mike ever bought.

The way we did these was typically peculiar and unnecessarily difficult.

The main thing is that each of us was, sort of like Pierre Menard, duplicating an image he had never really seen. First, we both picked covers that the other guy hadn't seen. Mike drew a set of pencils from the original cover of Batman #366... 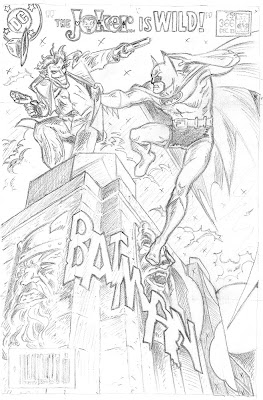 
... and I then inked his pencils without consulting the original image: 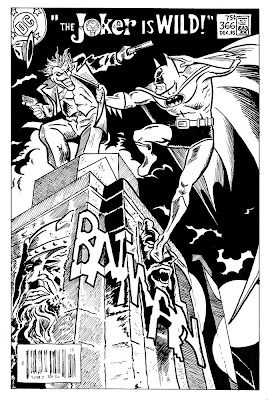 ... and then, still without consulting the original, I colored my version digitally: 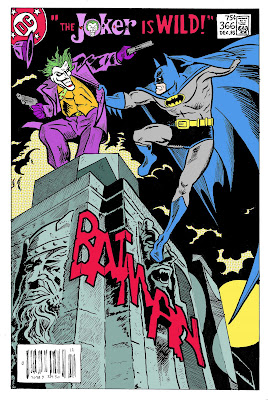 I was trying to stick pretty close to the flat colors of the Superfriends cartoon there. I wanted to stay pretty cartoony in my inks as well, figuring that would be a good way to "own" the image and make it look more like our work than the original.

Have a look at the original, by comparison: 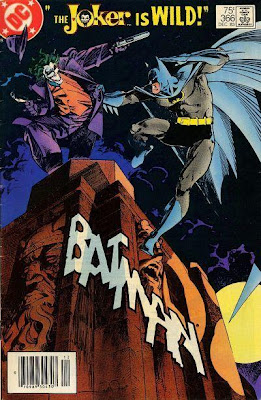 Simonson's image has a little more kinetic energy in it—a subtle change in the position of Batman's right leg makes a lot of difference in the balance of his figure, I think—and my Joker is a little bit chunky. And of course I didn't quite figure out the light and shadow on that weird building. But I think our version gains in legibility what it loses in energy.

(Mike would like me to point out, here, that the cover of Batman #366 is unique in the many-decades-long run of Batman in having a never-repeated logo for the book's title, integrated into the drawing almost in the manner of one of Will Eisner's Spirit titles. Mike has also heard that this cover existed before the story it illustrates—that the drawing by Walt Simonson was so cool that the editor ordered a story created to back it up.)

Our other cover-of-a-cover, which you'll see only here on the blog, started with drawings of Jack Kirby's Forever People #6. That's not the first comic I ever owned—my childhood copy was part of a big pile of Fourth-World comics given to me by one of my dad's friends when I was about six years old. But out of that Kirby-at-DC stash that had such a powerful effect on me as a kid, I thought this one had one of the coolest covers.

I started with a quick thumbnail, to see whether the image would work in my simplified style: 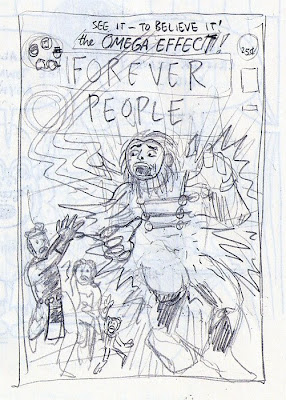 Then I did a set of pencils in my notebook and sent them over to Mike, who had never seen the original image: 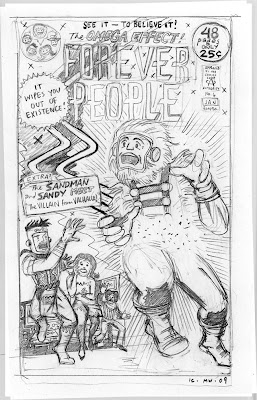 (Already I am losing some of the energy and drama in the thumbnail.)

Then Mike did an admirable job inking my simple scribbles: 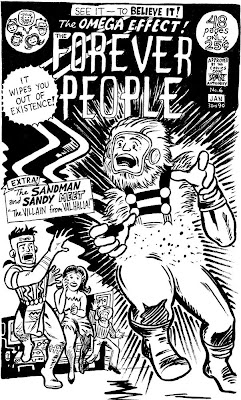 ... and then he put some colors on them: 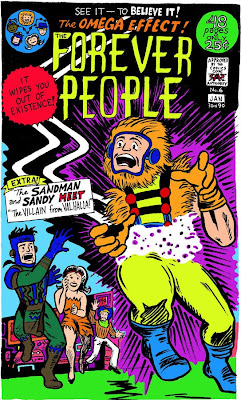 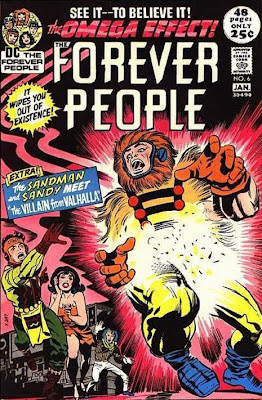 I'm not sure how successful either of these "covers" is—I mean, I don't think either of us should consider quitting his day job in an effort to unseat James Jean or whoever—but I have to say it was a ton of fun to put some time and effort into aping Simonson and Kirby. I won't say it has been a long time since I last copied drawings by Kirby, but this is probably the most careful I've been about it, and as an exercise I certainly recommend it.
Posted by Isaac at 11:01 AM

Those are both fantastic! I'm gonna have to try my hand at a cover at some point....