As soon as I read this, I realized Mike and I had been remiss: we've never even mentioned our plans (still not completed, like so many of our other plans) to dramatize the complete Satisfactory Comics corpus with LEGO minifigs. Of course we went with the punnish title. That must have been Mike's idea. 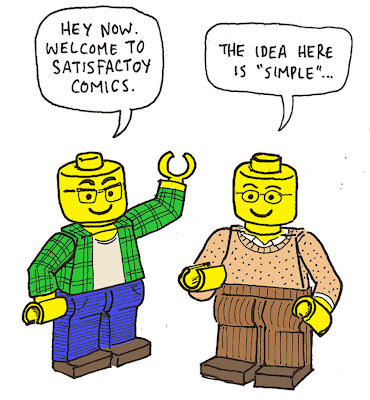 Fortunately, I guess, before we went through with this plan, we realized we'd been scooped by The Brick Testament.

—Well, Isaac, I'll show you. First, though, I like where you went with Satisfactoy Comics, there. And I'll admit that my first thoughts considered possible toy-related adaptations of our comics, in line with Peter S. Conrad's Rubik's cube comic or the aleatory comics printed on dice that were discussed in a volume of OuPus, the journal of the Ouvroir de bande dessinée potentielle. But I decided to follow a different inspiration. Namely: what would our comics look like if they were missing their R's?

Since we've entered that time of year when it's inadvisable to eat oysters, I thought I should consider Satisfactory Comics #3 for its adventure partly set at sea, where oysters are harvested. The main character of that tale, insofar as there is one, is Herman the Harpooneer. But take away the R's and he becomes... 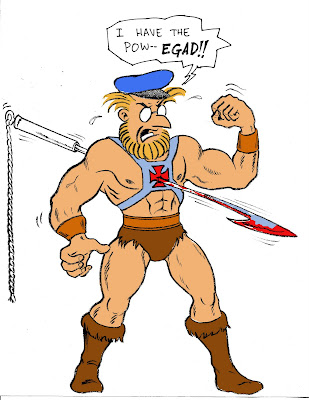 He-Man, the Ha'poonee.
Time allowing, I would have loved to show his foe, the gigantic Kaken, but time does not allow. Still, I think it fitting that the R-less version of issue 3 should have a sort of toy tie-in after all...
Posted by Isaac at 10:48 PM

I'm tempted to say that both of these drawings reveal a lot about how we handle (or mangle) the language.