At the beginning of the summer, we read -- and were inspired by -- Matt Madden's week of obstructions for Tom Hart. (If you're unfamiliar with that project, I recommend that you click over to it and check it out.

Since we're so interested in "Oubapo" (the comics equivalent of "Oulipo") and formal constraints, we started talking about getting a few other people to write obstructions for us, sort of in the spirit of contributions to a Satisfactory Comic, but potentially with more quibbling and grousing from the contributors.

Three more things got rolled into the snowball of that idea as it made its way down the mountain, avalanche-fashion. (This is typical of our slowly developing ideas.)

1. I discovered (and started using) a cheap printer for custom postcards whose work seems quite solid, so we decided to try to serialize a story on postcards, one page at a time.

2. When we were at MoCCA, we were invited to contribute to the second Elfworld anthology.

3. We got the website (yea, the very page you're looking at) up and running, at first more or less on a whim.

And so we're happy to announce that we're going to be doing a new (and crazily constrained) project: a serialized fantasy story, constrained (two pages at a time) by some fellow cartoonists and theorists, to be previewed (and discussed / nitpicked) here on the blog, one page per week until we've got ten pages. When I've got a few of them all finished and in color, and if the guy from Elfworld doesn't mind, I'll publish them in color on postcards.

We just got our first set of constraints, which I'll post in a few minutes. Up until this morning, all we had was a "style sheet" of our protagonist, a magician's apprentice: 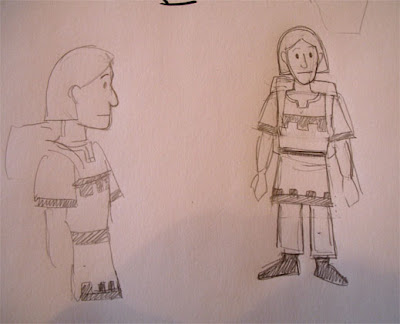 (The poor fellow doesn't even have a name for sure, yet, but I'm leaning towards "Stepan.")
Posted by Isaac at 11:33 AM