Still a few comics swipes to mention from Satisfactory Comics #2. We almost fudged the comics swipes in this issue, having forgotten to include one in the first story we produced, and in the second story Isaac's choice of swipe was obscure enough that he pointed it out in a note on one of the inside covers. Here's what it looks like: 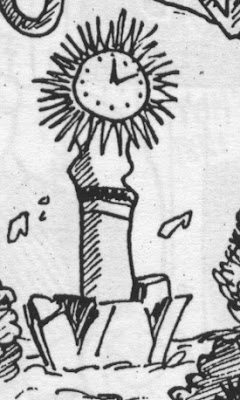 Now pretend you hadn't read the title of this post. Would you have known it for an image borrowed from George Herriman's Krazy Kat of April 11, 1926? 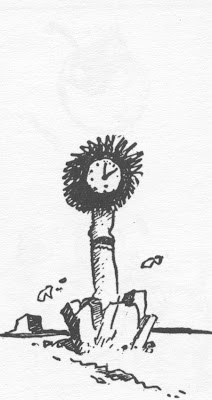 Now might be a good time for me to apologize to Herriman—and to Isaac—for my less-than-perfect imitation in the inks on our swipe of this curious clock. When I inked this story, I was (unusually) not across a table from Isaac, nor was I even in Connecticut. In fact, I was nowhere near my copy of the first volume of the Fantagraphics Krazy & Ignatz series, where Isaac found that image, so I stuck as closely to his pencils as I could (and now the inker's apology morphs into blame for the penciler—nice!).

In context on Herriman's original page, the clock is strictly filler, one of many central panels that ran in Krazy Kat for a while which were narratively unimportant (the syndicate required page layouts that were susceptible to various resizings and reshapings, which necessitated the odd panel that could be omitted). Still, Herriman routinely made these spare panels interesting to look at, and their jarring difference from everything else on the page can create an odd effect. Something of that effect may come through for the swipe in the context of Isaac's story, where it's part of the furniture of a dream landscape. Herriman's usual Coconino County backgrounds often seem dreamlike in their ever-shifting contours, so I suspect that Isaac's swipe also had its tonal role to play in this sequence, quite apart from its service in filling our swipe quota.

There were at least two other likely reasons for Isaac to have swiped Herriman in this issue. First, he admires Herriman more than Kelly, and since I'd already put a Kelly swipe in issue #1 it was time to honor the cartoonist that Kelly himself admired the most. Second, he had plunged headlong into that first volume of Krazy & Ignatz, then hot off the presses, and the material was fresh in his brain (with alarming consequences for the prose of his emails).

This second reason—the currency of certain comics in our reading—has accounted for a number of our swipe choices. It went some way toward the decision to include a tiny image of Joe Sacco in the crowd scene on the cover to the Yeliz half of the comic: 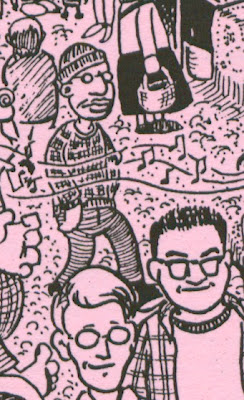 We'd been reading Joe's work a lot around the time we assembled this issue, and putting him on the cover was our brainstorm to squeeze a swipe into this half of the comic after we'd left one out of the story proper. It also seemed appropriate because one of Joe's most impressive strengths as a cartoonist (and specifically as a cartoon journalist) is his composition of outdoor crowd scenes. In this, our first such scene, our wobbly grasp of perspective is woefully evident—the man being snake-charmed to the left of the panel looks like a giant in the uncropped image—but we got better at that over time.

We also got better at our cartoon self-portraits, which look lousy in this drawing; but then, Joe Sacco doesn't really look like his self-portrait, either: 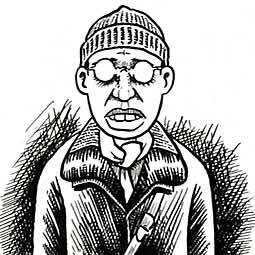 I know this because Isaac and I had the distinct pleasure of spending some time with Joe at an academic conference on comics that was held at the University of Florida in January 2002, and I got to see Joe's irises with my own eyes (similarly endowed, however rarely I draw them). Joe was very generous with his time and his knowledge back then, and on later occasions, too. If any of you blog-readers have yet to read his work—whether his long-form comics journalism in Palestine, Safe Area Gorazde, and The Fixer or his shorter stories collected in Notes from a Defeatist and But I Like It—then I urge you to seek it out!

There's one more swipe from issue #2, from the cover to Isaac's story "Getting Over Laura." This time the swipe comes as part of another one of our "extra features" repeated in each issue, namely our self-portraits. Isaac had a little fun with it by placing us at a Hallowe'en party with masks on our faces. He modeled them on actual masks that we had each made for Hallowe'en years earlier—in Isaac's case, an awesome papier-mâché insect mask [Edit: plaster, actually], and in my case, a familiar cloth confection topped with a hat: 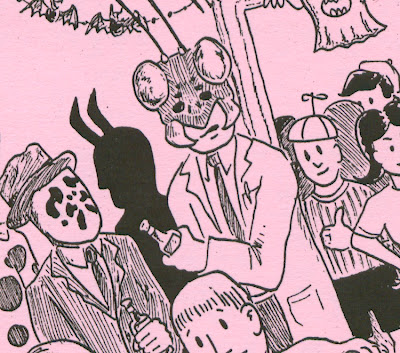 Yep, in middle school I went as Rorschach for Hallowe'en. But the pattern that Isaac pictured wasn't the one I made for myself—that would have required too much sewing! My much simpler mask was based on this Dave Gibbons drawing from the first issue of his and Alan Moore's Watchmen: 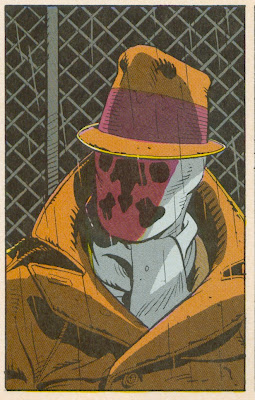 It's Rorschach shocked into silence after being teleported away from Doctor Manhattan and Laurie Juspeczyk. Me, I was shocked into silence when I thought about Dave Gibbons carefully inking all those little parallel lines in the fence, making sure that each bit of wire overlapped its neighbor in the appropriate way. Whew! And I thought sewing was tedious!
Posted by Mike at 12:32 AM

Hey, that grasshopper mask was plaster, not papier-mâché. It was probably the best one I ever made.

That mask got 3rd place in a contest sponsored by a gallery in Baltimore. It was sturdy, except for the antennae, which were just twigs of some kind. They eventually broke when I fell down a flight of stairs (while carrying the mask) and broke my collarbone. Ah, memories...

I wasn't sure if it was papier-mâché or not, but didn't have you at hand to doublecheck before posting. I will revise it later. Thanks for the correction!