Mike was up in New Haven over the weekend, and on Monday we got together to do a little drawing. We made some big progress on a project for an anthology -- more about that in a week or so -- but we also did a little bit of jam cartooning with a guy I met at MoCCA, Jason Bitterman. (Jason is an undergrad at Wesleyan, and is around New Haven this summer. He tells me he hasn't updated that website in years, but I like to make links in these posts when I can...)

With Jason, we drew a couple more pages of shuffleupagus strips, of the sort that you can find in any issue of Elm City Jams. (If you don't know how this jam game works, I implore you to follow that first link, to a post from way back on July 28th.)

Anyway, here are the two new strips. As usual, you can click on each to bring it up to legible size. 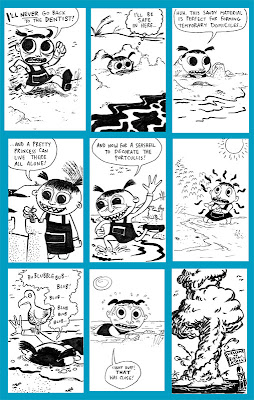 For this one, we just happened to draw (from our deck of characters) the creepy, scared little girl with the huge eyes and the shark teeth that appeared in the post where I was describing how shuffleupagus is played. Her demise was, sadly, unavoidable. 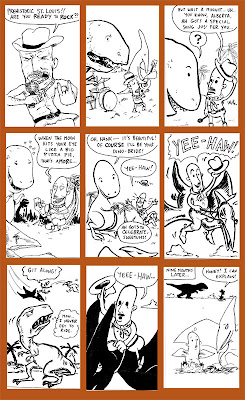 In this one, the character and the setting had both been in our decks for ages. The little shirtless cowboy was designed by Tom Hart during one of the jam sessions for ECJ #2, and I think I drew up the dinosaur jungle when we were working on the first issue.

It's worth noting that, without conferring or even muttering anything about it, Mike and I managed to draw nearly the same image in the first round of this shuff: his is panel 6 and mine is panel 8. Apparently, addled minds think alike.
Posted by Isaac at 12:43 PM