I'm afraid my extremely rough thumbnails obscure almost everything from view, but I'll put them up here anyway in hopes that they can at least generate some feedback. You'll note that my thumbnails tend to be extremely rough indeed; my usual method is to make even sketchier thumbnails, just placing balloons and figures and saving the real puzzles of composition for when I'm penciling panels on Bristol board. That won't work so well for this particular method of collaboration, though, so these pictures are (yes) clearer than usual. There's no room for legible text, though, so please refer to the script below (keyed to the numbers of the panels in the thumbnail): 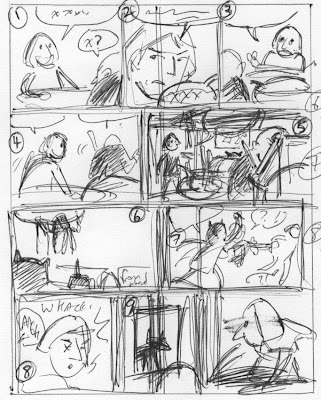 3) Stepan: "My master said you'd know, yourself."
Arntham: "And just who is your master?"

5) Stepan, framed in the doorway of a shabby, crowded room, looks over to Arntham at a writing lectern. In the dark background, some pointy ears are just visible—someone's hiding behind a trunk.
Stepan, thought caption (misdrawn as the topmost balloon): "It's so dark here, but I guess that's no hardship to a blind man. But hold on..."
Stepan, word balloon (on bottom): "How do you see the marks you make, Arntham?"
Arntham: "I don't see them, boy. I feel them..."

6) Arntham: "Look here. I grave them on parchment with a blade."
Stepan: "I can barely see the grooves..."

7) Pointy-eared assailant (brandishing dagger, viewed from behind): "You've seen enough! A blade for your grave, Arntham!"
Arntham (pushing Stepan): "Out of the way, boy!"

8) Stepan falls, hits his head on some furniture: WHACK!
Arntham (off): "Aagh!"

9) Stepan crouches over Arntham's body while looking toward the silhouette of a pointy-eared cur in the doorway. Stepan, thought caption: "Still groggy from my swoon...Arntham looks dead...and what's that in the doorway?"

I'm considering a different approach to panel 6. Instead of crouching behind the assailant and looking over to Arntham & Stepan at the writing desk, the viewer could look down from above on the whole room, thus: 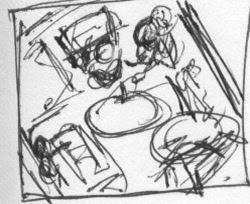 The dark blob in the lower left corner is the assailant, moving out from behind his trunk. I'd want to reframe this somewhat so that Arntham and Stepan aren't stuck at the extreme top with the word balloons at the focal point of the panel; I think I can arrange for their figures to be more centrally located.

I like the way this advances the story, though I don't understand why the assailant would say Stepan has seen enough, then leave him alive in the room. Or is the "cur" not leaving yet? If not, where are the exits that Charles is requiring? (Is that just in the change of scene between panels 4 and 5?)

Do you think that Charles's "Corrigan" constraint is meant to make the protagonist's face visible in every panel, or just to make it so his is the only visible face? (The latter would be true to the constraint's origins, I guess.)

If you condensed the dialogue in panels 1-3, would it be possible to spend all three of the following tiers in Arntham's studio? Then you'd have maybe one more panel to build up tension before you horned/eared assailant springs...

These are just some ideas; I'll probably have a few more...

On the note about condensing dialogue: I think you could lose the dialogue in panel 2 without depriving the reader of anything crucial.

First, thanks for the suggestion that panel 2 is killable. I think I WILL kill it, precisely so that I can use all of the bottom three tiers for Arntham's lodging. Frankly, I wanted another panel of scuffling, so this may be quite helpful.

Second, nothing in Charles's constraint specifies that the protagonist's face must always be visible, only that all other faces must be obscured, so I think I'm satisfying that constraint.

Third, in response to the questions in your first paragraph of comment (about Stepan's survival, the presence of the "cur," and the location of the exits), I cite the words of Miriya from Robotech: "I have reasons!" I could explain them all now, but it might kill the suspense.

I will say this much: since we're getting the story from Stepan's point of view, we only see and know as much at a time as he sees and knows, so the gap while he's out cold may be significant. And your equivocation between "horned" and "eared" in describing the assailant is prophetic. Suffice to say that yes, a character has exited, and no, I don't mean Arntham.

If this doesn't seem to satisfy the exits as Charles intended, I hope Charles will chime in about it!

"The gap while he's out cold"?

I hate to say this, but when I look at those thumbnails, I see bruises but no unconsciousness: Stepan gets shoved into a wall, then gets up. If you want the reader to be able to believe that he was unconscious between the last two panels, I think you need to do more to signify that.

Hearing, however, that you've got something like a case of mistaken identity in store is pretty pleasing.

..Oops. I was just reading the visual narrative, not the script. I can see that you mean for Stepan to mutter somrthing about his "swoon" in the last panel.

But I thing my suggestion might still be useful: you ought to be able to do something with the visual narrative to show that time has passed.

I think that can be arranged, and I think I can do it in a way that makes a character's exit a little more explicit. (And yes, I had been resorting to the "verbal-visual blend" to get around the time-gap problem...)

I just saw the Seventh Seal last night, and this strikes me as similar to a few of the interior scenes -particularly the attempted and aborted rape- in that movie. If I can, I'll fold a reference into my constraints.