Okay, these are rough, but they're enough to get a start, and enough for some kibitzing to begin, too.

I chose to use the constraints "All the World's a Stage," "The Seven Ages of Man," and "A Reverse Corrigan." Mike will have to deal with the other two. I handled the onlookers and the Corrigan restriction by combining them: our main character, Stepan the Apprentice, is people-watching for the first eight panels of the page, and we see him (facing away from us) in just a few of the panels.

Click, please, to see the larger image, as well as my notes on the script. 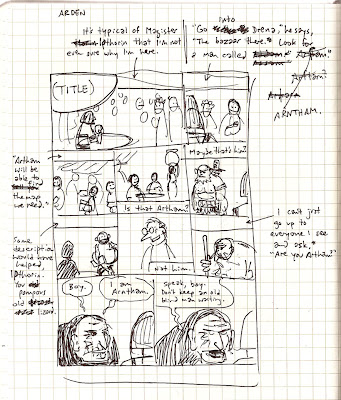 The seven ages are handled with a series of passersby in the Bazaar of Drena, which is where Stepan is supposed to meet the person who will sell him the map that his master has sent him off for. (My idea is that the master, a wizard of some sort, is off fighting some major evil, rescuing a town, or whatever, with his whole adventuring party, but he knows that they'll need a map of something -- I don't know what yet, and Stepan probably doesn't know either -- when they're done with their current mission, and time is of the essence in finding this map.)

At the end of the page, Stepan is face to face with a very old man who is supposed to be the person he's looking for. I'm sure it's bothering our young hero that the old man's calling him "Boy" -- Stepan's older than that -- but compared to this wizened old codger, probably anyone in the first five Ages of Man counts as a boy.

Page 1 doesn't advance the story much, but I hope it provides a little characterization (of both Stepan and, indirectly, of Magister Ipthorin), and a decent sense of a setting, even if it's a setting that we abandon on page 2.

With this many figures in the page (thanks, Charles!), it's going to take me a while to do the pencilling, and I'm probably going to want to do some studies before I settle on a face for shriveled old Arntham. I'll plan to get the pencils done by Friday, though, so I'll have time for the inking.

Let the kibitzing begin!
Posted by Isaac at 12:33 AM

The first thought that occurs to me is this:

"Drena" backwards is "A nerd."

Not 100%. But I like it because it's an anagram of Arden. That's a cue from Charles's first three constraints, of course.

But I'm certainly open to better ideas, especially from you, O Collaborator.

Your thumbnail looks longer & narrower than a postcard-sized page would be. Given that space is likely to be pretty tight at that size--especially with ten panels to get through--you may want to trace around an actual postcard to get your dimensions for really sketchy thumbnails to start with.

I know: who am I to be telling the master of the metrics how to size his thumbnails? But it's a lot likelier that the last tier would look as squat as the first three than that it would be as expansive as it looks here.

You're probably right, but my plan is just to divide the page into four equal tiers -- so I think it'll work. Judging by our other recent work, I know that one twelfth of a postcard (in a 4x3 grid) is square.

Good job, Isaac. I should warn you both that I took such a beating when I tried this that I'm feeling punchy. But right now I think you did fine. I agree with Mike that--- how are you going to fit this on a postcard?

The great thing about other people corraling and guiding you is that your story will undoubtedly go nowhere (and at a far different pace than) you expect.

Isaac, I think you left Mike the easy ones. You should have left him the Corrigan and Reverse Corrigan!

Well, I've put the layout onto a piece of bristol, and I'm happy to report that it seems drawable. Those square panels in the middle two tiers are only 2.25" on a side, but as long as I keep things fairly "iconic," I should be able to do it.

I've set up the lettering in that layout, and it still seems drawable, though I have to admit that some of the panels are pretty small. I'm hoping to get some pencilling done tonight, and if I do, I'll post the progress.

If it's legibility with small panels you're facing, just imitate the action of Chris Ware. Problem solved!