In a comment to one of Isaac's recent posts, the blogger Bully, the Little Stuffed Bull, quibbled with our use of the term "swipe" to refer to any sort of artistic imitation, be it homage, parody, or outright copying, even when there is no attempt to conceal the influence (or source) being imitated (or pilfered). I readily grant that the narrower sense of "swipe" usually connotes artistic skullduggery, but we will continue to use the term in the wider sense of all the many kinds of imitation, whether under- or overhanded—though of course our own swipes are all of the latter variety.

That variety can be pretty various, even when it involves swipes from a single artist. Today's case in point: Mike Mignola, whose work first came to Isaac's attention in his fine Hellboy series. In Satisfactory #5, we offered a classic swipe of a specific image from Mignola's hilarious one-shot The Amazing Screw-On Head: 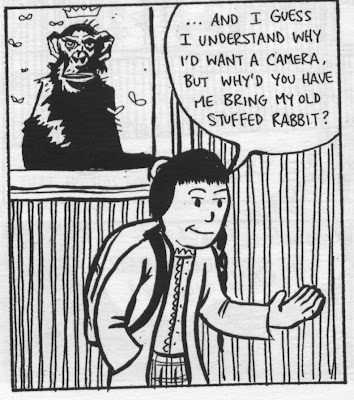 The picture behind Cassia on the wall of the Museum of the Horrible comes from a series of pin-ups of "three horrible old women and a monkey [sic]." We swiped the old women in previous panels, not posted here; here's the last of the pin-ups in Mignola's original: 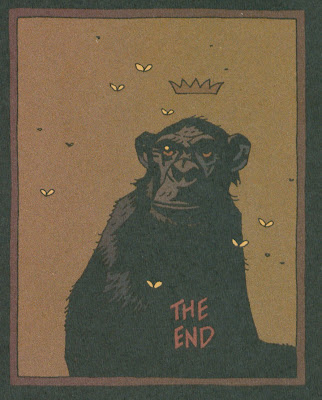 Our simian isn't as squat as Mignola's, but we did strive to make it a very close copy. (I have to say, though, that the beast looks more like a chimpanzee than a monkey to me—and, as Isaac would be the first to tell you, a monkey ain't no ape. See Satisfactory #7 for more details!)

This wasn't our first imitation of Mignola, however. Two issues earlier, we followed Mignola's compositional lead in designing the cover to our untitled maritime adventure. Though Isaac's original post about Satisfactory #3 shows just the front cover of the comic, the issue actually features our lone wraparound cover, explicitly identified in the extreme left margin as an “homage to Mike Mignola”: 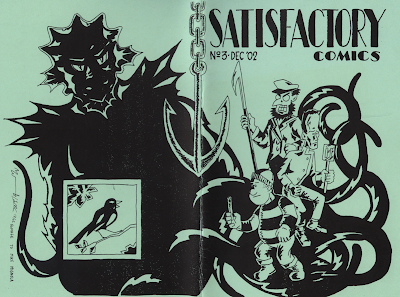 It’s not based on any particular Mignola image, but the overall design incorporates elements learned from Isaac's close scrutiny of many of Mignola's covers. The main principle at work on the front cover (the right-hand side of the above image) is the use of a triangle as the basic shape to organize the composition. That principle may not be very evident in our finished product, but it did determine the overall arrangement of our three main characters, and it seemed like a real insight into Mignola’s practice, at least when it comes to his covers for the collected volumes focusing on Hellboy. Take a look for yourself: 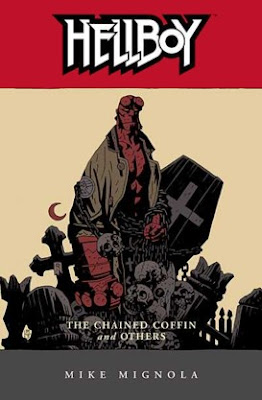 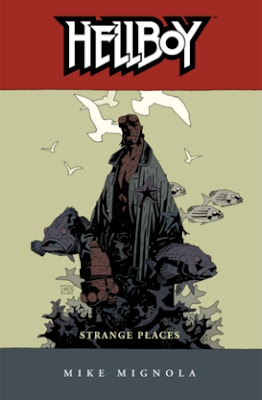 It works in group shots, too, even when the background looks busy: 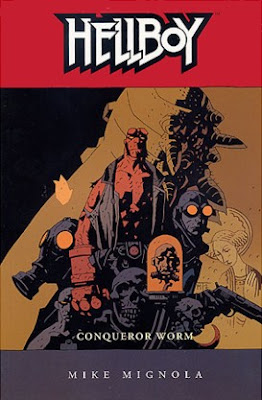 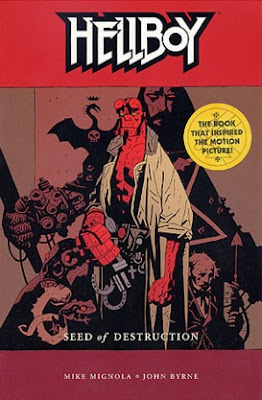 See what I mean? Triangles.

Beyond that compositional tactic, we obviously exaggerated the black and white contrasts throughout our drawing. Black and white contrasts were also nicely showcased in the inset drawing of a magpie on the back cover (to the left of our picture above), a discrete scene of quiet natural calm set against the menace of our silhouetted Kraken. This contrasting image was another stylistic move borrowed from Mignola, but my own library of his work is too meager for me to provide our models, and those quieter images aren't easily found in an online image search (they tend to be printed on back covers and non-story pages, which don't lend themselves to advertising). You'll just have to handle an actual Hellboy volume to see examples of such inset drawings by Mignola himself.

Overall, swiping different aspects of a given cartoonist's work, such as Mignola's, has helped us diversify our approaches to various artistic matters, from rendering individual images (as with our chimp) to page layout (as in our cover) to character design (I'm pretty sure there's a touch of Mignola in our beloved cannibal mermaids, also from issue #3). There's technical value to be had in the simpler, classic swipe—it does take a degree of skill to imitate a drawing closely, and it's useful to see where our drawing of a chimp fails to match Mignola's exactly—but there's even greater utility in learning principles and techniques that can be abstracted from any specific drawing so as to solve new artistic puzzles in other contexts.

I want to conclude with a bit of pre-Satisfactory silliness that also featured a nod to Mignola. In October 2001 I drew my first minicomic, a belated birthday present for Isaac called Isaac Comics and Stories. All but one of the stories and features relied on swipes of characters from comics that Isaac particularly loved at the time, and Mike Mignola's Hellboy had a cameo on the back cover—or at least part of him did, as one element in a very feeble homage to Chris Ware's construction projects: 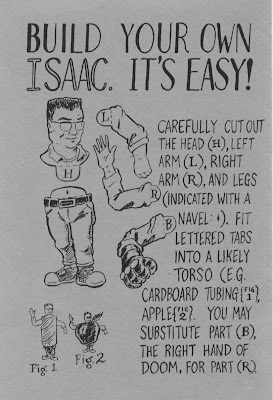 Why I indicated the Right Hand of Doom with a B escapes me at this juncture, as does the reason for my perverse habit of illustrating Isaac with a widow's peak (he hasn't got one, and I don't draw him that way anymore). In any case, I'm not sure exactly how to classify this image in the taxonomy of swipes; but we all remember what Eddie Campbell thinks of "definers," don't we?
Posted by Mike at 6:34 PM

Very cool talk on homages
I love Mignola and throw in stuff like that all the time when I make comics
Especially if it's in reference to a lesser-known character, ofcourse Hellboy had the movie and all that...but in the days of Dogma the t-shirt was very cool for everyone

Give us a link to check out your comics, Dylan -- and follow our "swipe file" thread to check out some of our other homages and swipes. I think Mike still has a few left to cover, too...