Tales from the Classroom

I'm working on inking our "I Saw You" anthology submission, but I thought I'd go ahead and fulfill the promise I made last week and make a post about Tales from the Classroom, the collection of teaching case-studies that we drew for the Graduate Teaching Center at Yale over the summer of 2003. Here's the cover, which is loaded with little gags and fun details you may not be able to make out in this photo (though you can click it, like any of the images in this post, to enlarge it). Notice the way we used the Mike Mignola theory of triangular composition on this one: 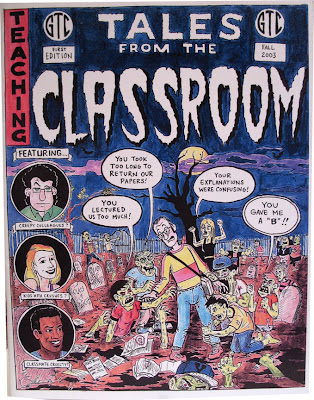 Can you spot Zombie Mike and Isaac? If the GTC prints a second edition of the book (and they've been talking about doing that), I'd like to recolor the cover. Now that I know a little more about Photoshop (I don't think I had ever even used it then), I could probably make that color look a lot better.

Tales from the Classroom is a collection of seven stories or scenarios about problem moments in the classroom, drawn from real teaching experiences by graduate students at Yale. Everything in the book was adapted from prose "case studies" written up by the people who experienced the events. (These studies were fictionalized with respect to names and disciplines, but the events remained the same.)

Our idea with Tales from the Classroom was that, if prospective teachers learn well from reading and discussing prose case studies, wouldn't they gain even more from reading comics, where they could observe gestures, facial expressions, spatial relations, and so forth? Judging from the response we've received from this book, that's certainly the case -- though more often than not, people just want to talk to us about Millie and Charles.

Several of the cases lack closure (which is why I think of them more as scenarios than stories) and they often end with questions designed to promote conversation. Often, this takes the form not only of "What should I do next?" but "What did I do wrong?" or "How did I let this happen?" -- and we did our best to load the stories with clues as to the origins of the problems that finally come to a head and drive the teachers to seek help.

Here's an example of a truly awkward moment that the grad student in question probably could have headed off, where one of his freshmen starts to act on the crush she has on him: 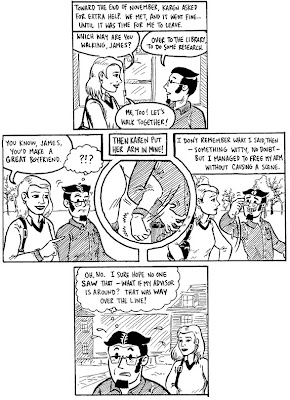 (I've rearranged those panels slightly from the way they appeared in the original book, for your convenience.) If you read that story, our hope is that you can see how James could have prevented this situation, or what in his teaching style led to this predicament.

Here's a couple of sequences from the longest story in the book, a scenario that's not only about teaching but about the advice you can give to other teachers. In this one, Carl is an art history T.A. whose section seems to be going really well until he gets to the very end of class. The discussion is very lively, intense and interesting, right up until he asks the question that's supposed to connect the section's activities to what's been happening (on quite a different track) in lecture. 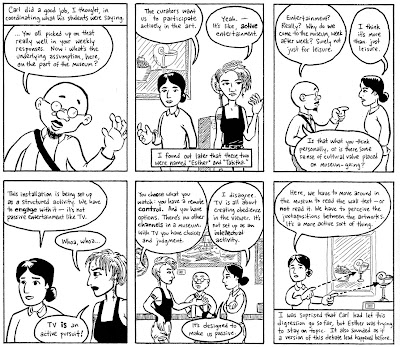 ... that leads to awkward silence? 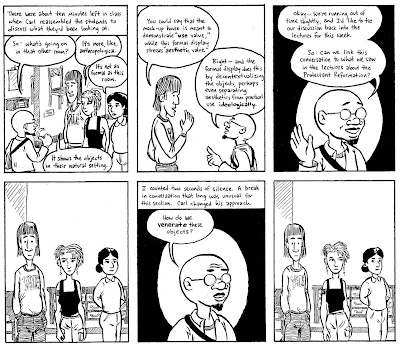 Things actually get a little worse than just awkward silence before the end of this story, since this question and its subsequent discussion manage to offend one of Carl's students in a way he didn't anticipate. The whole thing is being observed by a grad student from the Teaching Center, and the questions at the end of the case aren't just about what Carl should be doing, but about what the observer feels it's fair to tell him.

Strictly in terms of cartooning, doing this much adaptation of "talky," dialogue-heavy narrative gave us plenty of chances to experiment with layout, and we had a lot of fun with that. Here's a sequence with the aforementioned Millie the Mumbler, a case-study from a foreign-language classroom, where one of the students simply will not participate at an audible volume: 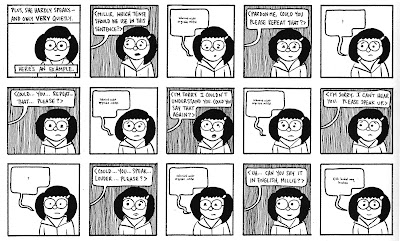 (Obviously, I was taking a page out of Chris Ware's playbook for that one; imitation is supposed to be the sincerest flattery.)

Here's a nice little sequence of "scene-to-scene" transitions with very little change, from a piece called "Joe the Dreamer," about a student who sleeps through most of a summer Italian class, and what to say to his classmates when they mock him behind his back (but in front of the instructor). Again, I've rearranged the panels, and again, you really have to click to enlarge:

... And here's another contest! I'll send copies of two Satisfactory or Elm City Jams comics to the first person who correctly identifies (in the comments on this post) all four jokes in all four of Joe's t-shirts!

For those of you who don't win the contest, however, I'm also posting, below, the entirety of the case study called "The Silent Critic," which features Charles, the Creepy Colleague, a fellow T.A. who so gets under the narrator's skin that the narrator starts to doubt his own teaching and his own ideas. You'll want to click these images to enlarge them, naturally -- but the whole thing ought to be readable. 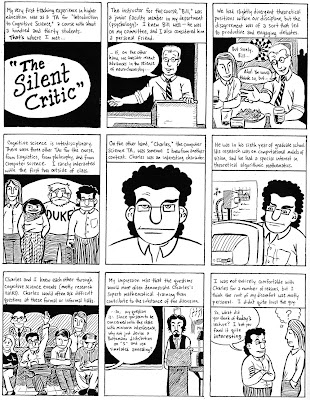 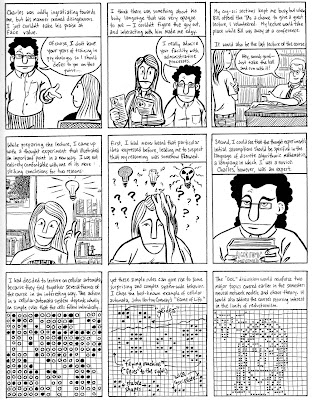 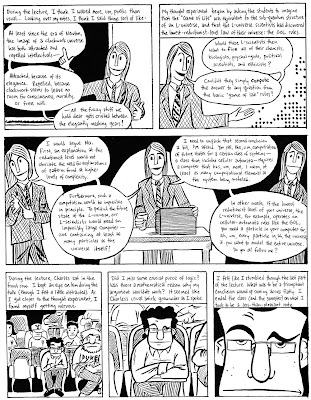 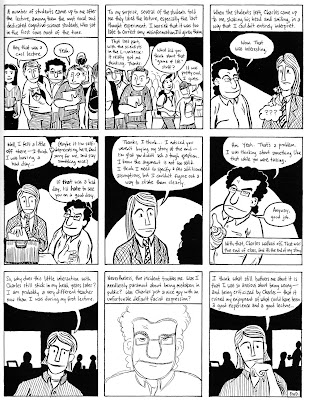 I don't have enough copies of this book to sell them, but if you'd like to get one of your own, I suggest that you follow the "Contact Us" link on the Graduate Teaching Center website and pester Bill Rando or one of the GTC staff about bringing out a second edition. It's high time this book was in the hands of more people, I think.
Posted by Isaac at 1:12 PM

Great post. I don't know why I missed this since August, but I did and once I discovered it early this morning, the laughter stayed with me all day.

I love what you've done with Charles the creepy colleague--this IS that guy's face. (though the question of a possibly "unfortunate default facial expression"--what a concept!--remains open). I wonder how a line of T-shirts emblazoned with that face might catch on as prophylactic gear for people who must endure too many seminars?

I want to get the comic. But, I won't win the Joe-the-Dreamer contest. Here are the allusions I think I got, for frames 2-4:

2. Bull Doz(ZZZ)er
3. Sleeper
4. Sloth
nb on 4: Joe's bubble has burst, he SNRKed (rhymes with perked?) up and the bubbled Zs have migrated to a place on his shirt, the Zorro-like emblem near his heart. Very nice!

I'm blanking on 1. Alludes to either systemic twittiness (the character Oliver in Monty Python's Twit Skit who never quite gets to shoot a rabbit pinned to a target because he's run himself over with a car) or hallucinogenic trippiness (Alice, White Rabbit, Grace Slick, Surrealistic Pillow, and a movie by a guy named Oliver. As if.

Sorry for the long post,but reading this post brought me great joy. I'd love to find out about #1 and, even more, would be very happy to nagivate a copy of this rare comic into my paws by nudging some one at Yale into printing more of these. It's wrong to not have more. It's wrong.