When I was a young lad, I first saw many of the better-known masterpieces of the Western art tradition in a multi-volume series of Time-Life books about such artists as Da Vinci, Michelangelo, Rembrandt, Goya, and Cézanne (I believe that the lone American artist in the series was Winslow Homer, and the only living artist represented—at least, he was still alive when my mother bought the series—was Picasso). The books naturally provided some context for each of the eponymous artists, so the book on Goya, for example, featured work by his predecessor Velázquez, and the book on Picasso had work by Braque, Matisse, and the like.

I mention this simply because I have the hardest time remembering that the painting that inspired the following swipe (from Satisfactory Comics #3) isn't by Delacroix, because I first saw its original in the volume devoted to him: 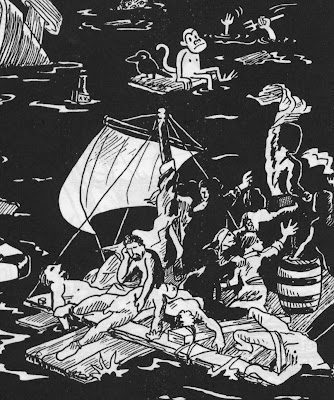 No, credit for the famous painting of The Raft of the "Medusa" belongs to Géricault:

Apparently, though, young Delacroix posed as one of the dying men for this painting, so its place in a book about his own work goes beyond art history into personal history.

, because we plopped three of its characters into the soup just below our Medusa-raft: 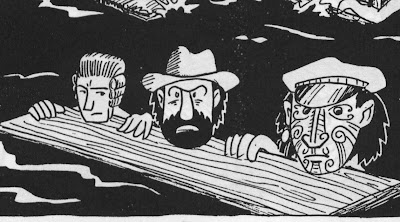 Recognize these guys from Horrocks's original? Here they are, not staring dumbly at the viewer but engaging the reader with some heady subjects: 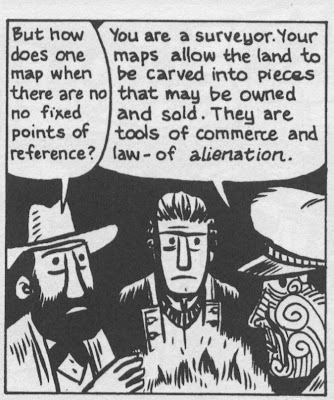 Our swipe might have looked better if it were inked with a brush, as in Horrocks's own drawing (apart from the facial tattoos, which look drawn with a pen). Alas, at the time of this swipe we were still toiling with Micron felt-tips for the most part.

We later treated M. C. Escher's work with slightly more respect—though it's largely satire-proof, since his work usually concerns formal experiment and visual play rather than overtly "serious" matters like death at sea or colonial expropriation of land. That said, his work does prompt interesting reflections on perception and identity, and the extent to which identity is determined by what and how one sees. Consider the serious failure in the following swipe, from Satisfactory #4: 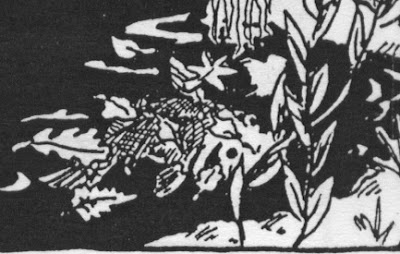 This image quotes elements from Escher's Three Worlds, but it only shows two of the worlds—the world underwater, where the fish waits, and the world atop the water's surface, where the leaves float. But Escher's original shows a third world, the world of the neighboring land, in the reflection of trees across the surface of the water:

I think it's a beautiful image, and I think it offers a shrewd retort to those of us who are too quick to deny depth to Escher because of the shiny surface of his art.