Alphabooksbeasts: G is for Gurgi

I'm not so happy with this week's second Alphabooks entry. I have an old fondness for this character that probably dates back to fourth or fifth grade, but despite a lot of effort I wasn't able to get him to look right. 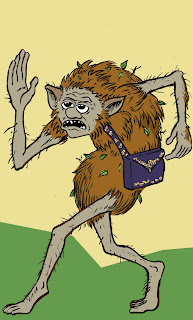 The problem for this week is a really hard one. The character you're looking at, Gurgi, appears in The Black Cauldron and the other Prydain books by Lloyd Alexander, which I devoured when I was in elementary school, probably too young or naïve to understand everything in the books. I remember only a few little things about Gurgi—one scene where he ducks his head down below his shoulders trying to avoid the big evil bad guy; the fact that he's always hungry and unkempt—and I haven't read those books for more than thirty years.

I'm pretty sure that the editions I read had no illustrations, so I was trying to recreate a really dim memory of how I would imagine Gurgi while I was reading about him. If you do a little Google search for him, you'll see that the Disney movie has completely colonized the visual imaging of this character, even though Disney's version probably could not swing a shortsword.

So I started this business trying to draw a faint and distant memory of an imaginary person. 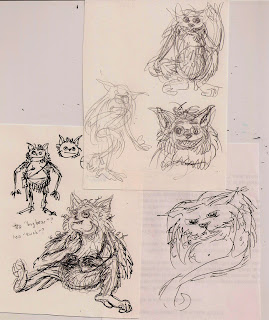 Some of those were pretty close, but I wasn't happy with any of them, because although they fit the descriptions I was reading of Gurgi, they really didn't look like much like my memory. I even went so far as to work up a complete inked drawing of that bugbeary version of the guy. Maybe in some ways this one's better than the one I colored. 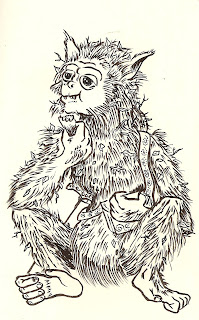 I do like his ape feet, and his mild resemblance to Sir Paul McCartney, but I still don't think that's close to the way I was imagining Gurgi when I was reading about Taran all those years ago.

So, at like 3:00 AM, when I should have been coloring if I wasn't sleeping, I started doing new doodles. There's some improvement here, though the pose I settled on seems really stupid in retrospect. What's wrong with just having him sitting on the ground? And why did my finished version wind up looking so mean, when these ones are cute? 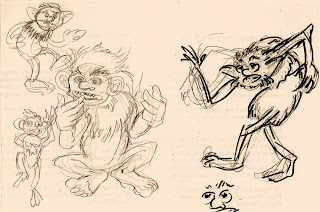 Well, if I had world enough and time, I'd try another run at the guy. I wish the ten-year-old version of me had left me some better notes.

It occurs to me (too late to be of any help) that a lot of my imagination of Gurgi must have come by analogy to Captain Caveman. Hm.

I agree that this Gurgi isn't as cute, but to me his crookedy posture & features seem just right. Love the Dungeon duffbumpers too!

I'm off to check out that Peanuts/Kafka mashup now. :-)

What's weird for me in considering your drawing is that it's definitely reminding me of...something...but I can't think what. It's not my image of Gurgi (which is even more dimly recalled than yours, Isaac), but what, then? It's a striking image, though. And I like the purse!

By the way--I could have drawn a Gurgi for my Arthurian alphabet, though I'd have had to spell it Gwrgi. (And I'd have had to choose among several available Gwrgis, only one of whom is likely to have resembled yours or Alexander's: Gwrgi Garwlwyd. Lo:

Well, Mike, you might be thinking of a wodewose; I certainly was during my process of putting the drawing together.

Or you might be seeing some of the posture of Miyazaki's No-Face. But I think a more likely referent is somewhere in Demonstration. The pose sure looks like something out of my demon sketches for that project.

Or maybe it's Captain Caveman.

It suddenly occurs to me that what I may be thinking of is M. C. Escher's Encounter; the pose is reminiscent of the white figures advancing toward a handshake, while the grimace and the lowered head recall the black figures advancing toward the same. I found a pretty large image online here:
http://pavlopoulos.files.wordpress.com/2011/08/escherencounter.jpg