Arthurian Alphabooks: G is for the Green Knight [hors série]

This week I'm departing from my usual black-and-white "yearbook" approach for the Arthurian alphabet to bring you this: 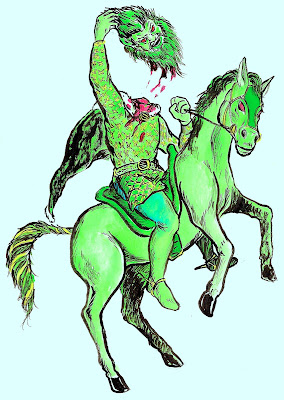 It just seemed wrong not to show the Green Knight in his emerald resplendence. Of course this is Sir Gawain's mysterious antagonist from the fourteenth-century masterpiece Sir Gawain and the Green Knight. I recommend reading it in Middle English if you can (the better to enjoy lines like "the snawe snitered ful snart"), but the modern English translations by Marie Borroff and Simon Armitage are both excellent and I warmly recommend them!

If you know the poem, you recognize the moment depicted above. If you don't know it, fear not—this drawing doesn't spoil much, since the moment occurs in the first of the poem's four parts (or "fitts").

I suppose it's about time I contended with showing a knight on horseback. (Just ask Isaac about my perennial struggles with drawing horses; I'm really making an effort here, guy!) My first pass at this drawing featured laughably stubby legs for both the horse and the Green Knight, so I had a fair bit of erasing to do before committing the drawing to inks. That's part of why I decided to invest in some tracing vellum to practice my inks this week, the better to limber up before drawing the limbs.

The other part of why I bought the vellum is that I wanted to see what the drawing might look like in two different thicknesses of nib pen, as opposed to my usual brush, and tracing vellum was the easiest way to reuse the pencils. In the event, I stuck with my favored drawing tool, but I did enjoy the challenge of using a pen and was amused at the different character of the three drawings (one of which featured some fortuitous inkblots that doubled as blood spatters). Just for fun—and because I think it looks pretty freaky—here's a screenshot of the three different heads side by side, suitable for printing out and coloring at home! 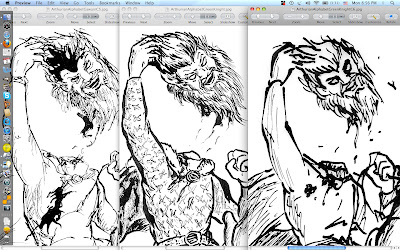 Of course the fortuitous thing about printing that gory display and coloring it at home is that you just need one crayon.

(Actually, I had always imagined the Green Knight's decapitation as being a bloodless wound, sort of like what you'd get chopping broccoli instead of a human neck.)

Hm, good point about the less-than-challenging aspects of coloring it at home. Well, there's always the backgrounds, I suppose!

But I must engage in my typical pedantry to note that the wound as described in the poem is far from bloodless. Ahem:

(Not that you mentioned his eyes, but I would like to note that the poem does describe the Green Knight's eyes as red. The color of his blood is unspecified, but since the poems notes that the blood stands out against the green of his body I would assume that the blood is itself not green and probably therefore red, as usual.)

I think a bloodless broccoli decapitation might result if you beheaded the Jolly Green Giant, however!

As I so often do, I stand corrected by your more thorough scholarship.

Seriously, I have taught the poem like four times. How had I missed that?

Well, I have my own weird SGGK blind spots or misremembered "readings," too. Early on I got it in my head that Gawain offers a rabid antifeminist tirade after the Green Knight has revealed all in the final fitt of the poem. It's true that Gawain notes biblical precedents of other men beguiled by women, citing Adam, Solomon, Samson, and David (lines 2414-2428), but it's nowhere near the raving that I used to imagine it to be. Tone is often tricky when reading rather than hearing speech (even invented speech), but I think Gawain is at least as much self-accusing and regretful in this speech as he is upset at the two women who have helped the Green Knight to pull a trick on him.

The thing is, my impression of Gawain's alleged tirade is so strong that I have to remind myself that it's an over-reading every time I revisit the poem--and trust me, I have taught it more than four times (not to mention that I own--and have actually read and used--at least eight different editions and/or translations of the poem)!

Hey! I love your image! I run a non-profit theater in Long Beach, CA. We are producing a staged version of the SGGK play using the Armitage translation for our Christmas show. I would love to use this piece on our program cover.

Delivering Shakespeare the rest of the year, we always take a light-hearted approach to our Holiday show, so this production will have some Monty Python-esque moments woven in, though we still keep the core story and Armitage's language intact. Cut for time, of course.

I can't afford to pay what its worth. In fact, I can't pay anything, but I would of course give you credit in the program. What do you think?

Um, this is a very belated response to Unknown from November 8, 2018. I'm just seeing your comment now, in late July 2020. In so many ways, that ship has sailed. Your performance sounds like it would have been fun to see. I hope that you are finding ways to continue theatrical endeavors somehow in these troubling pandemic times.

PS I am the second Unknown who replied to the first Unknown a few minutes ago, but in fact I'm Mike, who made that drawing eight years ago (!) and missed the kind comment from the a year and a half ago. I thought I should identify myself (and I'm not sure why I'm not appearing as myself here, but the "new" Blogger interface is unfamiliar to me and may account in part for my confusion. I haven't been here for a while!).

If you're looking for silly dramas based on Sir Gawain and the Green Knight, there's always the (bad) movie Sword of the Valiant, starring Sean Connery as Bertilak / The Green Knight (okay, that IS a spoiler. Sorry).