Alphadonjon: H is for Hyacinthe and Herbert

With the letter H, in Donjon, you happen to get two of the series's main characters: Hyacinthe, known as "the Keeper" during the Dungeon's Zenith period—he owns and manages the titular Dungeon—is also the hero of Dungeon: the Early Years, wherein he goes from a naïve young student with romantic notions of derring-do to a savvy and jaded widower. Herbert of Craftiwich, on the other hand, is the protagonist of the Zenith and Parade stories, and a major character in the Twilight storyline as well.

During the Zenith / Parade segment, they know each other well, but I've drawn Hyacinthe here as a young man, probably before Herbert was even an egg, so this particular scene could never actually happen in Dungeon. 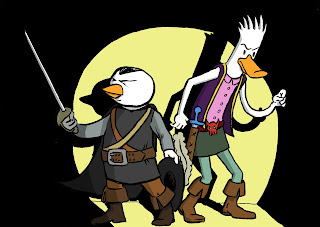 Hyacinthe's costume in this drawing is slightly different from the way he usually dresses once his studies are underway. In the city, he forms a secret identity ("The Nightshirt") under which to fight for justice (and woo a curvaceous snake-lady assassin), and his musketeer hat and sword really belong to that side of his personality, whereas the tunic is part of his daytime wardrobe. But I didn't want to draw him as The Nightshirt, because that would belong under N, right?

You may be wondering why Herbert is merely carrying the Sword of Destiny, and seems to be threatening to pinch or flick any approaching enemies. Well, early in his carrying of the Sword, before he had done three great deeds of valor with his own hands, the Sword would not allow him to draw it, or to use any other weapons. Instead, he had to learn to fight with just sticks and feathers.

He gets to be quite good at them. And then, toward the end of the second volume of Zenith, he's reminded that, because he's a duck, his whole body is covered with feathers. 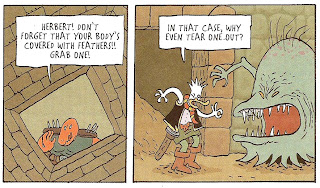 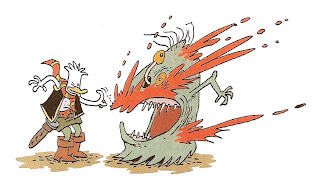 Alas, this talent only works against green creatures, but before long Herbert is more diversely competent (and better equipped) than we see him here. Eventually, the Sword even lets him draw it.

This drawing came together pretty easily. Originally I had thought about having the two heroes doing a sort of transgenerational fist-bump, but once I drew a doodle of it I realized that (a.) it would be hard to make it "read" clearly and (b.) posing the fist-bump would put them too far apart on the page for good drama. 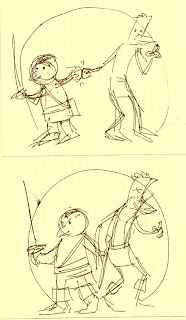 So I opted for the comics cliché of heroes spotlighted against a wall. I promise I won't overuse this pose. It just seemed the best way to imply that they were both important and heroic.

Anyway, next week: A sexy cat-woman (hello, Google hits) and a sorweful scribe.
Posted by Isaac at 12:01 AM

Very nice! But you left out either bricks or some sort of poster image or illustration in the spotlight; one or the other is de rigueur according to Bully's ten-of-a-kind roundup!

There will be bricks.

Thanks for the link, and this is beautiful! I need to break out my Trondheim books again!

Isaak, I will expect nothing but the most bountiful brickolage when that letter komes around.