Alphabooksbeasts: I is for IT

For my non-Donjon Alphabooks entry, I have chosen a disembodied brain that I hope will be familiar to all of you. 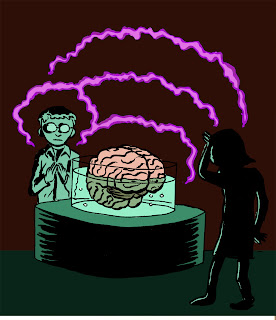 IT's name is not an acronym. IT's just capitalized because you're supposed to speak ITs name with fear and respect. IT dominates the minds of an entire world. IT is what Big Brother wishes he could be.

IT poses some compositional puzzles, if you're just working from the description in Wrinkle in Time.

For starters, IT is on a dais inside ITs dark dome-shaped building, but L'Engle doesn't say whether the disembodied brain is floating in a sort of receptacle, or in a terrarium, or just sort of flopped onto the dais in a pile. I opted for the fishtank approach.

Second, IT is supposed to be larger than a human brain. I exaggerated this a bit, but if you're just drawing a brain in a tank, how is anyone to get a sense of scale? I had to put Meg and Charles Wallace into the picture as points of reference.

I had a lot of time to think about this drawing before I had a chance to put it on paper, so I guess it's no surprise that my first doodle is pretty close (in terms of composition) to the final version. 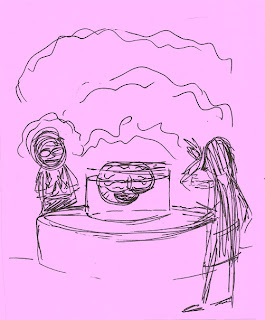 Next week: a stickleback and the fisherman who catches him.
Posted by Isaac at 4:25 AM

Another childhood favorite! This definitely gets the eerie power of IT across... & Meg & Charles Wallace absolutely belong in the picture. That scene in the book was so intense! I always pictured IT kind of hovering there like a hologram, but that would have been even harder to convey, I think...

I specially commend your coloring this time out, Isaac. The zapping energy really pops.

I was happy with the way this one came together, especially the color. The way I did that brain energy was sort of tricky (I mean, only a sort of mildly clever solution I hadn't thought of before).

I think the scene in the book is really hard to illustrate, and even to picture, because so much of it is really internal—the struggle within Meg; the struggle between Meg and IT. Nothing about that is really visual. I certainly didn't remember the scene "looking" like this, but I'm still pretty happy with the way it came out.

Except for my perspective, which is really sloppy.