This week's Dungeon entry in Alphabooks features a vampire and a monster, but I have to admit that I've already drawn a lot of scarier Dungeon characters. 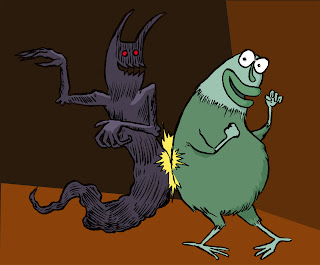 I love these guys.

Grogro and Gregor are both denizens or employees of the dungeon. I don't think I've said anything yet about the economics of the Dungeon itself. Basically, it's a commercial enterprise: there are rumors of fantastic treasure inside, so adventurers arm themselves with their best gear and come from far and wide to raid the Dungeon. They almost all get killed eventually by the various monsters inside, and the adventurers' equipment is added to the hoard.

Gregor is one of the vampires who live in the dark chambers that not many other employees go to. (Yeah, that's what vampires look like in Donjon.) He appears in a few scenes in Dungeon Parade: Day of the Toads. Grogro is much more frequently seen, in nearly every one of the main-timeline books, and in fact he's the protagonist in the second story in Dungeon Monstres: Night of the Ladykiller.


I had a good time drawing this piece. Probably it helps that I am really fond of Grogro. He's a buffoon with a big appetite and a childlike demeanor, and he is one hundred percent fun to draw. He's been cropping up in my margins a lot this week. 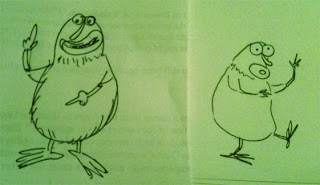 I had all sorts of weird ideas for ways to pose the characters this week. 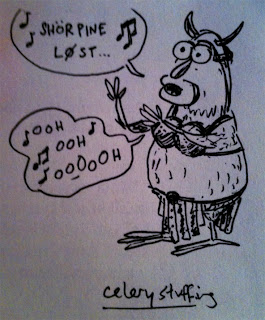 Eventually I just sort of settled on the idea that Grogro should be dancing. There's a great sequence in Night of the Ladykiller where Grogro winds up in an arena, fighting off a brace of gladiators with a broom and some flatulence, and I think some of the fun choreography in that sequence got me thinking about Grogro bumping butts with a vampire. 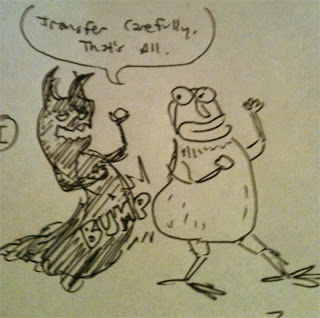 Next week: two of the most important characters in all of Dungeon.
Posted by Isaac at 3:49 AM

Man, I really need to read Dungeon. I love the dancing gesture you settled on here.

I think I mentioned this offline, but I really dig this drawing, Kaiser! Great contrastive yet complementary pair of characters!

I'm guessing that one of the characters for next week is a deft wielder of a deadly feather. I'll need to stay tuned for the other!

Yeah, one or two of those Grogro doodles are from shopping lists. You know me well, Mike.