Believe it or not, I posted my F drawing to the Alphabooks tumblr on time last week, but since I was traveling at the time my Internet interface wasn't convenient for posting to the blog. So now, belatedly, I present my drawing of an Arthurian character whose name starts with F: the unusual Feirefiz, yet another character from Wolfram von Eschenbach's Parzival: 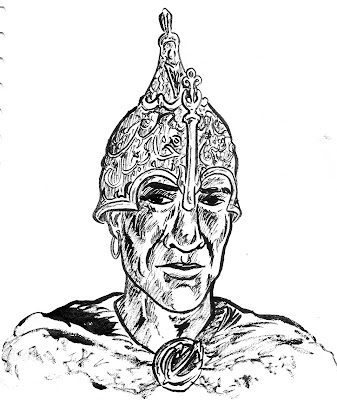 Feirefiz is the older half-brother of Parzival, the Grail-winning hero of Wolfram's romance; they share a father, Gahmuret the Angevin, whom you may remember as the husband who abandoned Belakane, the Queen of Zazamanc, when she was pregnant with none other than Feirefiz. (I have recycled Gahmuret's motif of the anchor, which I previously worked into the fabric of Belakane's mantel, in the image here on the clasp of Feirefiz's cloak; fortuitously, the shape atop the nasal guard on Feirefiz's helmet, modeled after an actual medieval helmet from the Muslim world, also recalls the form of an upright anchor.)

As with Belakane, Feirefiz is a non-Western character who enjoys great esteem among the Europeans he encounters. He is invited to join the Round Table even before he converts to Christianity, and evidently his fabulous wealth outshines that of all his compatriots in the fellowship. He does eventually adopt the faith of his half-brother, however, though his motive is more obviously romantic than spiritual: he falls in love with a keeper of the Grail and must become a Christian before their marriage can be solemnized. In Wolfram's telling, their son will grow up to be the legendary Prester John, Christian king of the East.

I'm afraid that my finished inked drawing really fails to capture the visual effect that gives Feirefiz a notable appearance among Arthurian figures, and that is his mottled complexion. The name Feirefiz itself has been conjectured to mean something like "speckled face" or "speckled skin" (built on Old French terms rather than Wolfram's own Middle High German), and Wolfram compares his skin variously to the coloring of a magpie and to the appearance of writing on parchment—apparently the result of the difference between his parents' light and dark complexions. While Feirefiz's appearance is unusual enough to be remarked upon by other characters within the romance, all agree that he is quite handsome, and he shares his father's reputation as an amorous knight with a succession of desirable lovers.
Posted by Mike at 10:37 PM

It's really too bad you weren't able to come up with a way to give his face speckles. I suppose that might have made the general shading really tricky.

Yeah, I used the word "fails" advisedly here...Looking at the image, I could tell you which blots I think of as speckles, but I seem to have fallen into a trap of using a lot of feathering and tones in my portraits for this series (cf. the more recent of my two Green Knight images), and if I really wanted to bring this off I need to be a lot bolder about defining speckles (whether they be construed as patches of dark against a lighter ground or patches of light against a darker ground: the manuscript simile would suggest the former, the magpie simile the latter). One of these days I may attempt a take two.

(As a "What have we been reading?" type of PS: I image that Jaime Hernandez would take a much more direct approach, given his tendency to eschew tones altogether for stark black and white contrasts.)