Sorry I'm late. In this week's Arthurian alphabet image, J is for Jeschute: 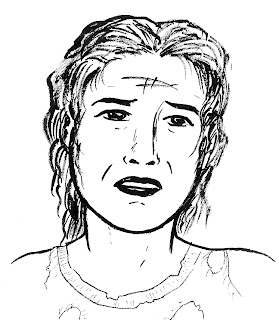 Jeschute is the name Wolfram von Eschenbach uses in his Parzival to designate a character who goes nameless in his source, Chrétien de Troyes's Perceval, or The Story of the Grail. In both texts, the character is a woman who is twice victimized: first by the titular hero, whose abusive behavior can in part be explained (though not excused) by his vast ignorance of society and courtesy; then she is tormented over a longer period by her own husband, Orilus, the Proud Knight of the Plain.

Soon after Parzival has left his home in the Waste Forest to find Arthur (in hopes of being made a knight), he encounters the beautiful Jeschute lounging in her pavilion. Misunderstanding his mother's  instructions about how to treat women, Parzival grossly mistreats Jeschute, forcing his kisses on her, stealing a ring from her finger, and eating her food before riding off, completely oblivious to his violations of courtesy and insensitive to Jeschute's tearful protests. (The first time I taught this text, several of my students described him bluntly as "a jerk.") When Orilus returns to see the disorder in his tent and the distress of his wife, he assumes that Jeschute has betrayed him with another man and strips her of her finery, cruelly taunting her and refusing to believe her protestations of innocence.

As (badly) depicted above, Jeschute next appears in the text some time later. The main descriptive detail provided by both Chrétien and Wolfram is that her clothes are in tatters, little more than the collar of her shift and a few rags that reveal more than they conceal. I assumed her hair would also be in some disarray and that she would look rather pained.

I would have liked to have made her look a bit more aggrieved, rather than just wounded, and I would have liked to have made her more beautiful (at least by my lights), but I had a really hard time making a satisfactory drawing this time around. I made various attempts at inking a pencil sketch, on vellum tracing paper and then directly on paper, before I gave up and tried to get a decent freehand image. The first few passes at a freehand drawing were also pretty lousy, but the one above I can live with. I do wish it looked more obviously medieval, however; the hairstyle's disarray masks my original design, which had a more ancient appearance, and the tatters of her shift look dismayingly like a worn T-shirt. Oh, well.

Incidentally, an affecting (and effectively disturbing) cinematic treatment of Jeschute's character—or, more accurately, that of her nameless Old French forebear—may be seen in Eric Rohmer's film Perceval le Gallois (1978). It hews fairly closely to Chrétien's text, apart from its ending (in that Rohmer attempts to supply a conclusion to Chrétien's unfinished narrative, which abruptly breaks off in the middle of an episode with Gauvain/Gawain).
Posted by Mike at 9:31 PM