Alphabooksbeasts: H is for Humbug

For this week's non-Donjon Alphabooks, I have paid a visit to a book I enjoyed quite a bit as a kid.

You may recall that in the 1961 novel The Phantom Tollbooth, our your protagonist Milo is accompanied by a watchdog named Tock and a flim-flam insect called the Humbug. 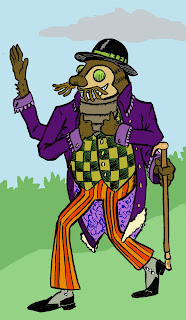 I had originally hoped to make my Humbug look a little like P.T. Barnum, but none of the portraits I could find of Barnum made him look much like a bunko rascal. (More like an avuncular scamp.) Anyway, I took my cues from some textual clues and made the Humbug look a little dandified.

You may be more accustomed to seeing the Humbug like this, as he appears in the book's original illustrations by Jules Feiffer: 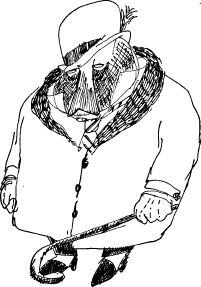 (Here he is, talking to Milo) 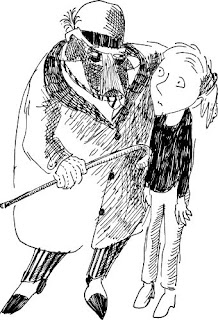 Or, perhaps, if you're conversant with the feature-film Phantom Tollbooth, this will be the Humbug you picture (on the right, duh). 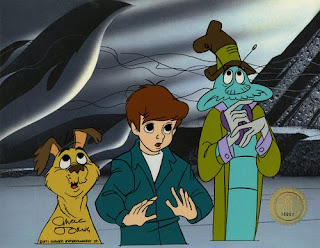 (Here's the source for that Chuck Jones image.)

I wanted to work from the way the Humbug is described, however, and although there's not much visual description in Phantom Tollbooth (which is more concerned with the fun of language than with non-linguistic details), we do get some information:

...from around the wagon stepped a large beetlelike insect dressed in a lavish coat, striped pants, checked vest, spats, and a derby hat. "Let me repeat—BALDERDASH!" he shouted again, swinging his cane and clicking his heels in midair.


So apparently the Humbug goes for sartorial hodgepodge. Does the result look a little bit more 1968 than 1961to you? 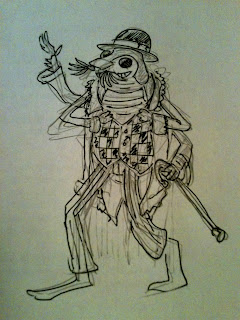 Next week: some disembodied evil, and maybe an outer-space sea-slug. We'll see.
Posted by Isaac at 12:02 AM

YES!!! One of my all-time favorite books, & you nailed him! He looks the way Barnum *should* have looked!

Thanks so much, Leah—I'm really flattered.