Arthurian Alphabooks: I is for Sir Ironside

Here's another knight from Sir Thomas Malory's Le Morte Darthur—the Red Knight of the Red Lands, whose given name is Ironside: 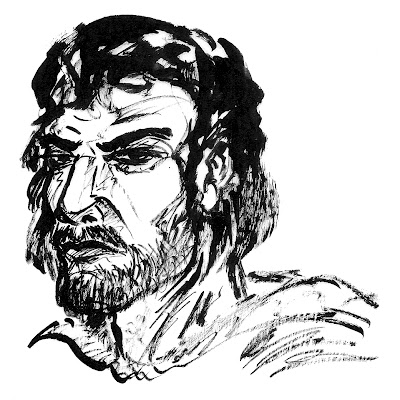 As usual, physical descriptive details are few in Malory, but we are told that Ironside is attractive, at least. He's also proud, and a wily fighter. Indeed, when he's in combat with Sir Gareth, his foe in the first part of The Tale of Sir Gareth, his cunning style of fighting serves to educate his young opponent, who up till then has prevailed against his enemies through straightforward strength and skill.

He's also a pretty vengeful heartless fiend—at least at first. When Gareth embarks on his inaugural quest, he does so to answer an appeal to save a beleaguered woman from Ironside's unwanted attentions. In the meantime, Ironside has cultivated a creepy habit of hanging the bodies of the woman's would-be deliverers, assembling the corpses of his knightly victims in a large group that dangles from a tree. When Gareth sees this, he's not sure what to think, but he's certain that it's not chivalric behavior.

It's something of a surprise, then, that Ironside gets recuperated: his life spared by the victorious Gareth, Ironside renounces his hateful ways, explains that it was all 'cause he loved a lady, and ends up welcome at the court of King Arthur. Go figure!

But all that redemptive stuff comes after the drawing above, which is meant to show Ironside in his pitiless days. He could maybe do with still more of a sneer, but I hope it's at least marginally credible that the face above is that of a man who is pridefully ready to hang a bunch of his fellow knights just because his would-be squeeze won't give him the time of day.