Alphadonjon: I is for Isis and Isidore the Scribe

Okay, this is another week in which I'm composing my Alphabooks posts at about 4:00 AM on Sunday/Monday, and I don't need to make an even later night of this. Let's be brief.

I is for Isis, the Kochak Princess, and for Isidore the Scribe, bearer of the Sword of Destiny. 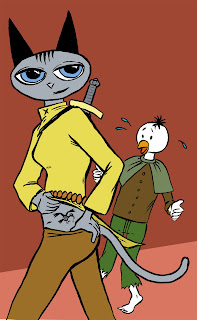 In Dungeon, one woman turns out to be the love interest of both Hyacinthe (as the Keeper) and Herbert, two of the main characters in the series. If I understand Terra Amata genetics correctly, she even seems to have had children with both of them. And that's Isis, the Kochak Princess.

Isis is supposed to be sexy, but not in a cheesecake sort of way. Rather, her sexiness comes from confidence, competence, and self-determination, as well as a mysterious or at least checkered past. It's that last factor that's symbolized by her hip tattoo: she's been a member of a thieves' guild. (If you can't see the tattoo, maybe you can click to enlarge.)

So: there's your sexy cat-woman, as promised last week.

As for the sorrowful scribe: meet Isidore. He appears in the book occasionally when someone tries to steal the Sword of Destiny, as he is one of the Sword's former wearers. He wore it, however, for only twelve seconds before someone killed him and claimed the sword. (I haven't read the volume in which this story is told, because it's one of Dungeon's French-only publications. Maybe one day.) Anyway, that's why I didn't put the Sword around his waist: I figured by the time I could explain it, you'd be more than twelve seconds into this post.

Not much to tell beyond that. I include a couple of doodles so we can carry on the conversation about energy in the sketch versus the finished product. I know I like the facial expressions on Isis better in these sketches. Alas. 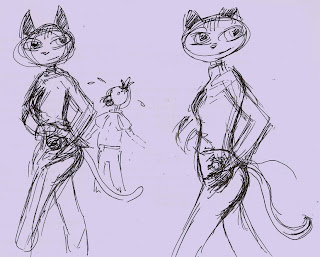 Next week: I'll be traveling, but I'm hoping to schedule a post with a creature (or is he two creatures?) before I leave.
Posted by Isaac at 4:08 AM

I tell you, Kaiser, these Donjon designs really flatter your cartooning!

For what it's worth, I prefer the expression on the finished Isis to the sketches--at least to the right-hand sketch, which seems to cute-up the basic design overmuch (enlarging the eyes, which are more lidded in the finished version, and making the oval of the face less narrow). Well, "overmuch" is a matter of opinion; but I think the finished-art Isis is closer to the original AND less prone to cheesecakery.

However, I *may* prefer the loose sketchiness of the line itself in these trial versions, as opposed to the more controlled line of the finished color version. But in this case I think the extra energy (to my eye, at least) comes from the rendering rather than the design per se.

I have to admit that there's not much energy in the rendering of that final version—a few fairly flat ink lines, and that's all. I may be starting to rely too much on what can be done with color. (Especially in this case, when I got kind of lazy and just used flat colors where often I would at least drop in some shadows. In my defense: it was already very late at night.)