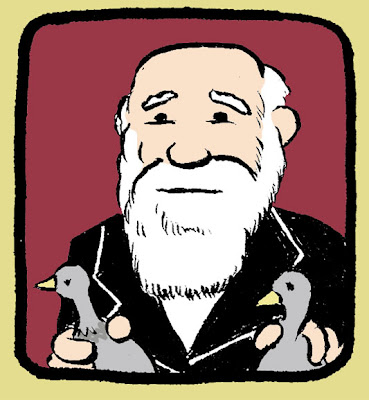 Today's the two-hundredth birthday of one of the people I admire most, the author of On the Origin of Species,

Charles Darwin. I admire Darwin for the contributions he made to our understanding of the natural world and its history, for his insight and reasoning and courage, and for the thoroughness with which he documented the evidence for each step of the thinking in his masterpiece.

But I also admire him because he was a bumbler and a procrastinator, like me; because he was aimless and unemployed after he graduated from college; because he undertook an around-the-world naval voyage even though he suffered severely from seasickness. It's wonderful when you get to know a "great mind" through his or her writing and find that genius to be amiable, self-deprecating, and humorous, while also brilliant and aware of the tragic struggle that drives us (and all life) to succeed.

So today, on Darwin's bicentennial, I am marking the occasion by drawing a couple of doodles in his honor, depicting two of my favorite moments in his autobiographical writing.

First, from his university days as a zealous beetle collector: 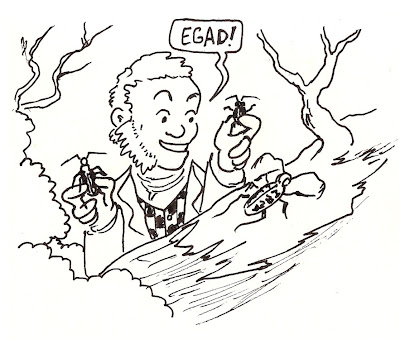 I will give a proof of my zeal: one day, on tearing off some old bark, I saw two rare beetles, and seized one in each hand; then I saw a third and new kind, which I could not bear to lose, so that I popped the one which I held in my right hand into my mouth. Alas! it ejected some intensely acrid fluid, which burnt my tongue so that I was forced to spit the beetle out, which was lost, as was the third one.

That's a passage from Darwin's Autobiography.

By the way, Darwin's coleopterophilia was so well known that one of his contemporaries, Albert Way, drew this cartoon of him in 1832, when Darwin was off on the Beagle voyage. 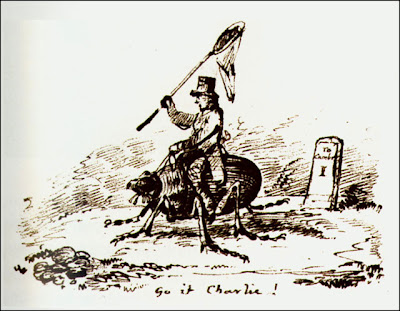 The caption reads, "Go it, Charlie!"—as in "Go get those beetles!"

Here's one of my favorite moments from The Voyage of the Beagle.

I was always amused, when overtaking one of these great monsters as it was quietly pacing along, to see how suddenly, the instant I passed, it would draw in its head and legs, and uttering a deep hiss fall to the ground with a heavy sound, as if struck dead. I frequently got on their backs, and then, upon giving a few raps on the hinder part of the shell, they would rise up and walk away; but I found it very difficult to keep my balance. 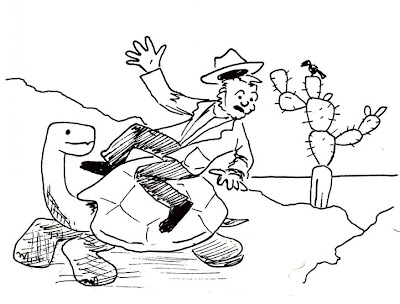 Now, on the off chance that you've come to this post looking for a comic that engages Darwin or Darwin's thinking a little more seriously, or just for more competently drawn pictures, let me recommend Jay Hosler's kid-friendly synopsis of evolutionary theory, Sandwalk Adventures.

Hosler is a professor of biology, a practicing research biologist, and nice guy, as well as being a fine cartoonist. If you know a kid who's of reading age and curious about the natural world, Sandwalk Adventures would be a great way to set him or her on a good path of inquiry and reasoning.

If, on the other hand, you're just wondering where I got that image of Darwin with his fancy pigeons at the top of this post, well, it's an enlarged and colored version of his appearance on the cover of Satisfactory Comics #7. And why is Darwin on our cover? Because one of the hastily improvised strips in that issue features yours truly, ranting about a couple of common misconceptions about evolutionary theory.

Please click these pages to enlarge them, and you can read "...And Another Thing" totally for free, as part of your Darwin Bicentennial celebration. 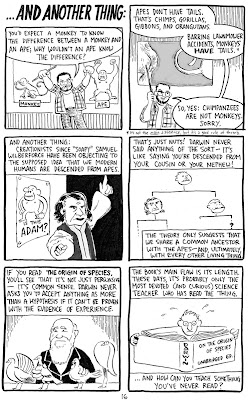 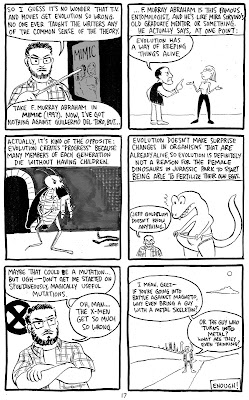 (That's script by me, thumbnails by Mike, pencils by me, inks and letters by Mike, from a prompt by our pal Tom Motley, roughly halfway through our crazy thirty-plus-hour drawing marathon.)
Posted by Isaac at 10:40 AM

This is terrific stuff, Kaiser. I especially like the captions from Darwin to accompany the cartoons from Cates. A fitting tribute to the work of two admirable men!

I'm assuming that you mean Darwin and Guillermo del Toro.

What a thoroughly delightful post! I had almost forgotten the hidden pigeons in my own Darwin illo... http://leahpalmerpreisscuriousart.blogspot.com/2008/02/specimen-darwin-again.html

Your anecdotes about the fervent beetle-hunting reminded me of one of my very favorite Darwin quotes, from a letter: “My dear Fox, I am dying by inches, from not having any body to talk to about insects." Can you imagine how he would have enjoyed the bounty of arcane conversations we take for granted on the internet?