This week we've got a special double Doodle Penance, because we couldn't make up our minds about which of this week's search requests was the most urgent.

Someone came to the site looking for "Hezekiah Sugata," who is (as I'm sure you know) the hillbilly shogun featured in the second issue of Elm City Jams.

Someone else came to the site looking for "isaac trondheim," which I can only assume meant they wanted a picture of me drawn in the style of one of my favorite cartoonists, Lewis Trondheim, the French super-genius behind Mister O,

and about ten thousand other awesome comics.

Well, we decided to do both. 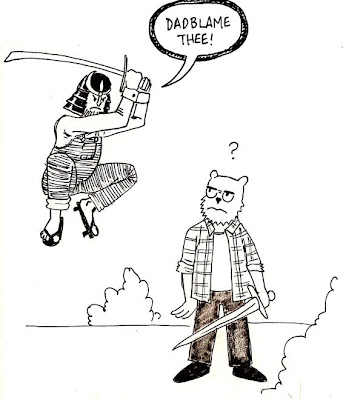 What I want to know is why it looks like Hezekiah Sugata is hovering, Matrix-style, in that doodle, instead of leaping through the air. What did I do wrong? Please address this in the comments.

...Isaac, here 'tis, below. You will note that I chose to draw you much as Trondheim draws himself, only you've got glasses more like your own. And, oops, I forgot you have a beard nowadays (because I've hardly ever cartooned you with a beard). But then a beard might look weird on a bird. Anyway, here's the full duel between Hezekiah Sugata and Isaac Trondheim, drawn à la manière de Lone Wolf & Cub (I wish): 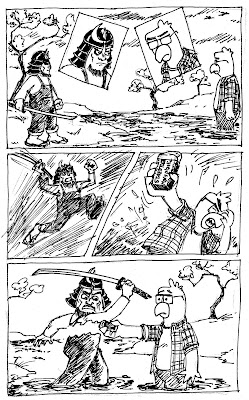 I'm sure it comes as a relief to see that your cartoon double has managed to survive an assault from one of your own cartoon creations!*

*Full props as due: Tom O'Donnell came up with the name "Hezekiah Sugata, Hillbilly Shogun," but Isaac first drew the character. Incidentally, we were honored to have Hezekiah featured on Chris Sims's Invincible Super-Blog in his review of Elm City Jams #2. Also incidentally, I alluded to the weaponry of Lone Wolf and Cub in my lone panel of that ECJ strip: 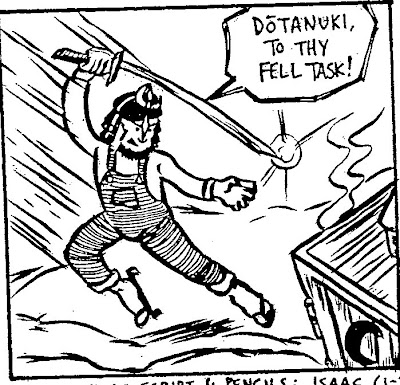 And yes, he's about to assail an outhouse there. If you need to know more, consult Elm City Jams #2!
Posted by Isaac at 12:13 PM

You win again. I like the way that your comic makes a joke about the easy bisections that comic-book samurai are always able to execute: what could sever more cleanly than a dotanuki?

Well, only the rubber incarnation of Mars himself...

About that Matrix-y hovering: I think it might have something to do with the relative positions of the legs being so even. It almost looks like Hezekiah Sugata is sitting on something. A little more asymmetry may give more of an impression of motion. It's an interesting effect, though, and worth thinking about how it got there!

would some action lines show the motion arc of hezekiah or is that too simple?