In honor of Darwin's 200th birthday, I thought I'd look at some of the ways in which children are used and misused in Lone Wolf and Cub volume 12: Shattered Stones; consider it a study in natural and unnatural selection. This volume presents another grab-bag of episodic adventures, united not by a thread of plot so much as by a theme of problematic parenting (including a gruesome concluding tale that appears to owe something to Chinatown, though it's quite possible that this episode of Lone Wolf and Cub was printed before that 1974 film made its way to Japan). For the frugal among you, that means that this volume is also probably inessential to the overarching narrative of the series, though I enjoyed it for the way it showcased Daigoro in action with various grown-up partners (including the young scammer pictured above, who is not, you may be relieved to note, nibbling on a baby kebab; that's not how he uses kids!).

Here's Daigoro taking part in the stage act of a lady magician, who asks to "borrow him for a few moments": 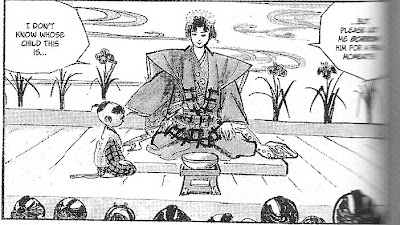 And here's another child on stage—or rather, the effigy of one, in a dumbshow of murder that works exactly like Hamlet's dumbshow prelude to The Murder of Gonzago to catch the conscience of a man who killed a real infant in the same fashion (you can see the villain sweating in the third panel): 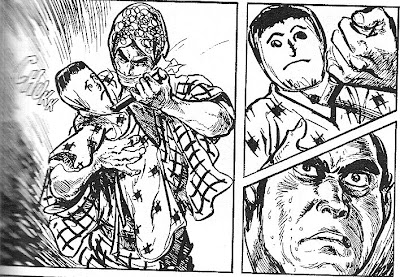 (Incidentally, the baby's parents get their revenge on the killer without Ogami drawing his own sword. He observes the scene, however, and once their revenge is accomplished the parents have their own reason for having hired Ogami after all. Let's just say that their reason is not conducive to the passing-on of their traits.)

The remaining two stories both conclude with some surprises about paternity and the likeness or otherwise of children to their adoptive or biological parents. In "Scattered Stones," the mother of little Hamachiyo makes a poor choice in the Lone Wolf's version of Solomon's test of the two women who contended over a single baby. She repents her bad choice decisively. But the Lone Wolf isn't done with her son, whom he confronts with Lord Seizan, the woman's lover: 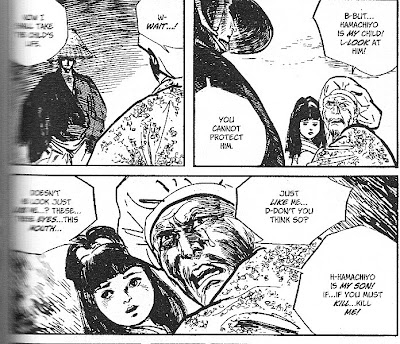 I don't think it's giving too much away to say that the weeping man pictured with little Hamachiyo is not, in fact, his biological father, though he may think he is. I won't tell you what the Lone Wolf does next. I will tell you that the child's biological parents both die as suicides, despite—or rather because of—the involvement of the assassin in their domestic quarrel.

Finally, the central paradox of parenting in this series remains that of our protagonist. Two stories in this volume end with scenes where a secondary character realizes, to his or her shock, that the sweet little boy Daigoro is not only in cahoots with a cold-blooded killer but is, in fact, the killer's son. In one of those stories, this realization is played for comedy with a bit of pantomime. In the other, it plays out this way: 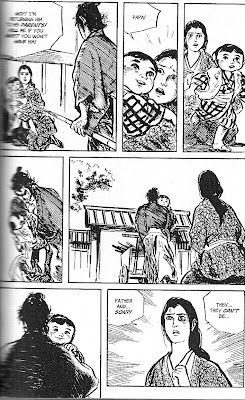 And yet, father and son they are. I'm guessing Daigoro takes after his late mother in some respects. Happy birthday, Darwin!
Posted by Mike at 11:13 PM