Lone Wolf and Cub month: Monsoon and McGuffin in Volume 22: Heaven and Earth

The title story of Lone Wolf and Cub volume 22, "Heaven and Earth," sets our heroes against their massed foes in a face-off that recalls an encounter from way back in volume 10: father and son stand alone opposite a whole line of men with swords: 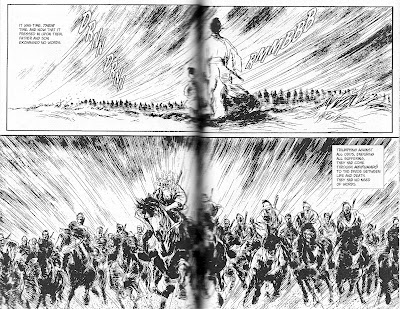 There's time enough for a little chat before the fighting begins, and Retsudo Yagyu starts by mocking Ogami's failure to crack the secret of the Yagyu letter—only to be doubly stunned on learning that Ogami has indeed broken the code, but declined to reveal the secrets contained in the letter: 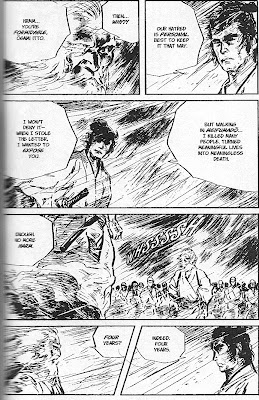 So the Yagyu letter, which propelled the plot for several volumes, turns out to have been a McGuffin after all! Could writer Kazuo Koike not think of a suitable revelation for the letter? Or did he think all along that the essential conflict didn't need the complication of further political maneuverings? Given that the likeliest victims, were Ogami to expose the Yagyu letter, would be the Yagyu themselves, and considering that Ogami's standing on this plain precisely to wipe out as many Yagyu as he can with his own hands, his stated reluctance to turn more "meaningful lives into meaningless death" may sound a little bland.

And yet, throughout the series Ogami has tried to fight on the side of the angels, even as he has taken money for assassinations. I haven't written about this aspect of his character before, but Ogami never agrees to take on an assassination until he has been told the whole story behind the hit: why the client wants the victim dead, what the wider circumstances are. Nor does Ogami always believe his clients—that would be rather naive of him, wouldn't it? And while the series has never, to my recollection, shown Ogami outright refusing a client (perhaps because such stories, where nothing much happens, would not be worth the telling?), it has taken care to show numerous occasions where Ogami gets involved with situations not as a paid assassin but really as a kind of vigilante. More often than not, he seems motivated by the uncompromising warrior's code of bushido, but sometimes he acts out of what looks like nothing more or less than simple justice. Even if his driving force in life is the "wild justice" of revenge.

And now, in volume 22, his quest for vengeance has driven him to this floodplain at the meeting-point of the Sumida and Onagi rivers in Edo, where the weather is coming on something awful as the Yagyu warriors prepare to surround him in their vaunted sword-wheel: 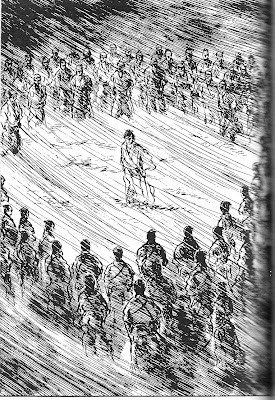 But this battle cannot be fought to its conclusion—not in this volume—because the idiotic poisoner Abe-no-Kaii, spared thus far by both Ogami and Retsudo because he is beneath killing by a samurai's blade, opens the floodgates during the downpour, threatening to flood all Edo. Ogami has already shown himself to have a desire to preserve innocent life, and even Retsudo must recognize that a flooded capital can hardly improve his now-delicate political position. So the foes call a halt to their battle and work together to stop the flood—though their truce is only temporary. Their last words to each other in this volume, as they prepare to engage a desperate gamble to save Edo, might almost sound loving in a different context:

—but of course each wants the other to live just so he can slay him personally.
Posted by Mike at 6:13 PM

It sounds like the story's getting a lot less episodic and picaresque now. Are there other chapters or stories in this volume, or is it all basically building to this scene and its aftermath?

You're basically right. There are episodes (and portions thereof) that focus more on Abe-no-Kaii rather than on Ogami and the Yagyu, and there's an extended flashback sequence that explores more of the backstory of what Ogami was saving his money for and how it might come in useful against the Yagyu--but I don't want to spoil that, so I'll say no more about those details. But yes, the total elapsed time in the present-tense narration of the volume is much condensed from the usual practice.