Lone Wolf and Cub month: Tough questions and tougher answers in Volume 9: Echo of the Assassin 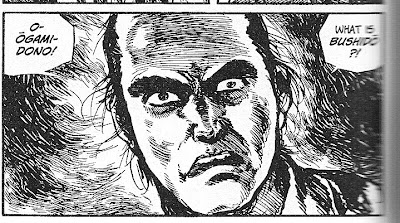 The single-mindedness of Itto Ogami could get a little hard to take if he were never confronted with men and women of other minds. On that score, the episodic nature of Lone Wolf and Cub is a storytelling advantage, for Ogami routinely meets new people—some, but not all, doomed to perish under his blade—who challenge his commitments and the motives that have brought him to walk the assassin's road. Those who keep his attention the longest are those who also share samurai training and therefore may be expected to understand something of bushido, the way of the warrior, even if they balk at Ogami's extreme effort to live beyond good and evil. In Volume 9: Echo of the Assassin,

each of the four main stories devotes some space to the questions of how to live, what to do; and even if Ogami remains resolute and unchanging in his quest, the series is richer for raising the questions.

Take this poor guy. He seems to have figured it out: 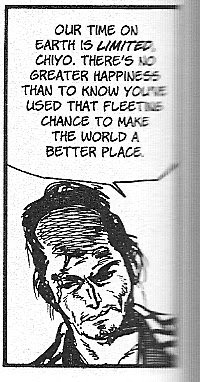 Unfortunately, circumstances lead him to challenge Ogami, who would rather not fight him. Those circumstances turn on this man's background as a samurai. As Ogami points out, the man's romantic happiness would be doomed if he were to follow "the world of the samurai, the harsh, foolish way of bushido": 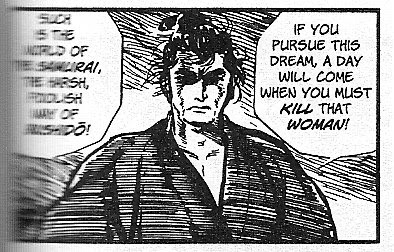 Not everybody appreciates single-mindedness as an ideal, of course. Even this would-be doctor, who turns out to have some skill with a sword himself, protests when he learns that his roommates at a wayside inn were none other than the Lone Wolf and cub themselves: 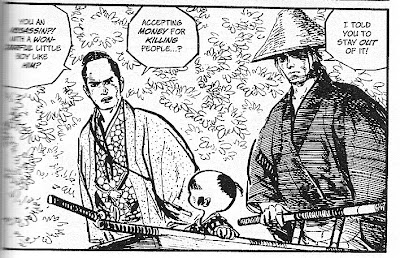 This man, Kikuma Toyama, has a nine-page conversation with Ogami trying to answer one question: "Why did you choose this path of slaughter?" As a doctor, Toyama is worried about the slaughter itself, certainly, but he presses Ogami more about the seeming choice to walk that path, for Daigoro's exposure to death alarms him: 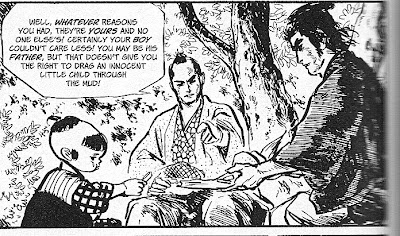 As always when such questions come up, Ogami insists that he and Daigoro "chose this road together, father and son....You could never understand." Indeed not:

And that's the end of that conversation—though not of the episode, which has a few surprises in store yet.

The final full-length story in the volume sees Ogami going undercover, in a way, laboring as part of a human ferry team to carry passengers across a river in shoulder-borne barges. To get the job, he first has to win the trust of Jidanda Karizo, the boss of the hadaka-mushi ("naked worms," the men who haul the barges). Karizo is highly suspicious of the motives of a samurai who would deign to perform peasant labor such as this. When Karizo asks him why he wants the work, Ogami says, "So we can live, father and son...No other reason." Karizo doesn't believe this (as is evident from the way he glares at Ogami), but he takes Ogami on nonetheless.

And when it turns out that Ogami had an ulterior motive after all—a theft from a barge that comes with its own toll of corpses—the boss is by no means displeased by Ogami's apparent deceit (only "apparent" because it can always be argued that Ogami and Daigoro only live to complete their quest, and their quest depends on the theft from the barge). As Ogami departs clutching his son and his stolen goods, the peasant Karizo shares his own insights about bushido with his men: 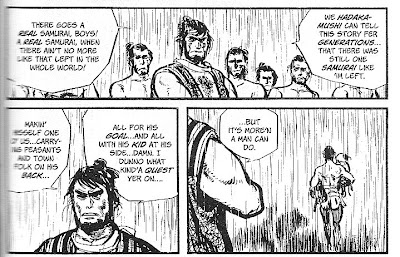 This volume of the series helps take the measure of the man Ogami, even as his daring theft sets up the next major movement in the plot of his war with the Yagyu. More of that in tomorrow's post!

********
Postscript: One element of this volume is a bit disquieting, and that is the depictions of sexual harassment of women, ranging from ogling to rape. In each case, the women are the objects of narrative sympathy and their abusers the objects of outrage, but it still makes for unpleasant reading. I'm not sure if some of the panels are merely complicit in an aggressive male gaze or if they try to call attention to that gaze by forcing the eye (particularly in the case of the oglers). Japanese censorship of images in manga limits nudity, so the actual images are R-rated at worst, but their context is unsettling and I'm not always sure where the pages land in terms of exploiting the images of victimization.
Posted by Mike at 6:58 PM