This week's "Doodle Penance" comes from a pretty reasonable request, posed by an anonymous Google searcher (as usual): "jimmy corrigan in the classroom."

I feel pretty well prepared to talk about lesson plans or whatever on Chris Ware's awesome Jimmy Corrigan.

I've read it carefully nearly a dozen times, and I've taught it to college students six or seven times at least. (I lose track. It hasn't been on all of my comics syllabi, but it has been on most of them.) I feel sort of like I'd be disappointing my colleagues at NACAE if I didn't approach this seriously. On the other hand, after last week's penance, I'm convinced none of our readers need me to take another of these prompts too seriously.

Perhaps our Google searcher was just a schoolteacher looking for a nice graphic to use for an upcoming snow day, in which case, let me recommend this: 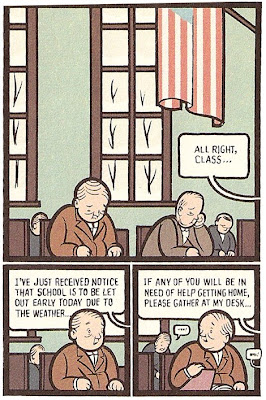 The nineteenth-century Jimmy (I guess we normally call him James or Granpa) doesn't spend a whole lot of the book in the classroom, but apparently he's a good student. Or maybe his teacher's just sympathetic because James's mother just died. But in this sequence, his teacher taps him to be one of four children participating in a parade-stand display connected to the World's Fair. 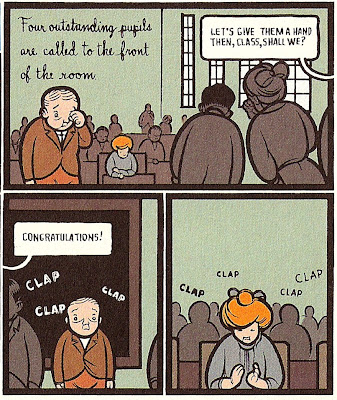 ... But she might just have picked James because he's one of only a few children enrolled at the school. I mean, his classmates look amazingly middle-aged. The poor little runt really is a fish out of water.

I'd never noticed that before. It seems like I notice something new in this book every dang time I pick it up.

Oh, right. Doodle penance. I'm not supposed to be scanning Chris Ware's work and discussing its nuances. I'm supposed to be drawing something of my own, preferably something stupid, and posting that.

Well, having taught Jimmy Corrigan several times now, I can say that the first hurdle is just getting the students to read the whole thing. It's a "bold experiment in reader tolerance" in more ways than one. (Actually, that's how I often start my lessons on Ware: "In what various ways is this book a test of your tolerance? How is it difficult, and to what ends?")

... But at some point, there's inevitably another moment of awkwardness, when we start asking about the weird semi-Freudian, often-Oedipal imagery of Jimmy's dream sequences. What does the robot mean? Why is Superman acting like such a jerk? What's the allegedly symbolic fascination with peaches? And why is the book so interested in horses? 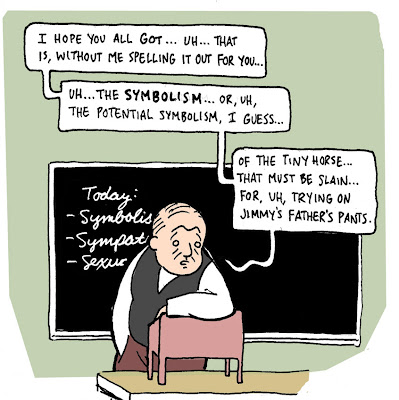 Hm. That picture didn't turn out so well, though I think swiping some of Ware's colors helps it out a little bit. But using a Rapidograph really killed my pencils this time around: the lines of Jimmy's face need to be finer than I could make them with that pen.

Mike? What have you got?

—Hey, Isaac...Sorry for the slight delay, but I was at an Oscars party. Perhaps you'll accept that as an excuse if I tell you that I came home with a copy of Hellboy: Seed of Destruction AND a Hellboy figurine,

thanks to the missus's winning of a prize for her Oscar prognostication?

Perhaps not. Regardless, here's what I got. First, Jimmy Corrigan in "the classroom," which is to say a drawing of young Jimmy made up of the letters in the words "the classroom" (the "E" is turned sideways): 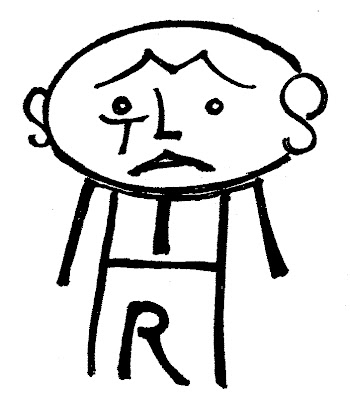 I figured that I wouldn't try to compete with your account (and doodle) of teaching the graphic novel, since I've only done so once, myself. However, I can also fight back with a previously unpublished drawing by Chris Ware, which he sketched for me in November 2007 at the "Graphic Novels in the Classroom" event where I pontificated on a panel with some other DC comics scholar types: 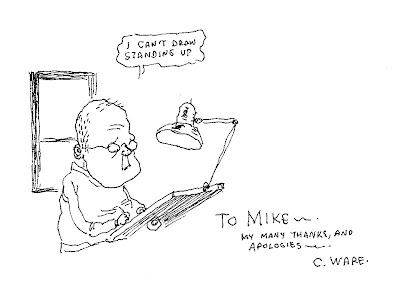 Maybe that'll get me some points in this non-competition!
Posted by Isaac at 7:45 PM

By the way, Isaac, nicely done on the Chris Ware color palette, there.

Photoshop makes that sort of color swiping very, very easy. It's as simple as using an eyedropper.

It's a little harder to swipe benday dot patterns, like I did with the "Thing S", but that's not very hard, either.

I'd never thought of that before, but yeah, Chris Ware was on that whole "Superman is a dick" thing pretty early. If I've any complaints about the Jimmy Corrigan book, actually, it's that a lot of that Superman stuff was excised. I particularly missed the sequence where Superman leaves Jimmy on a remote island, returning occasionally to taunt him, break his arm, etc.

Ben, I agree that the issue of Acme you're referring to is interesting or good or valuable material (whatever explains why you particularly missed it!). That said, I can see why it's better left out of the graphic novel version: it's a bit prolonged for a sojourn in an alternate modern-Jimmy fantasy and would throw the pacing out of whack.

Frankly, I'm not sure that the opening short sequence is that essential either, though it certainly sets up Jimmy's anxiety about Superman figures and his troubled relationship with his mother. But visually it's not in the same key as the rest of the book (with respect to color and layout, both; the latter's no surprise, since it originally ran in The New Yorker and has to be viewed sidewise in the book edition). That helps set it off as a prologue, I suppose, but where would you put that Jimmy-on-a-desert-island sequence in the graphic novel? After Jimmy's final glimpse of his new coworker? As if the book needed to twist the knife any more!

What that desert-island issue really does nicely is to confirm the comic-bookishness of the Acme Novelty Library series, precisely as opposed to the neatly-tied off GN edition. The little build-your-own structures, the letters pages, the fake ads: these all make better sense in a floppy context. And doesn't that desert-island issue of Acme even feature an anthropomorphized globe reading a comic book on its cover? I think that story, as a stand-alone issue, is a salute of sorts to the only format that can properly contain it.

Yeah, I see your points, Mike... and you're probably right: the Superman stuff'd be a bit out of place in the GN, owing to its essential "comic book-ness." I guess the reason I pine for it is that if you've read ACME, the GN seems like an edited "slice" of Chris Ware's (already somewhat limited) emotional palate and the Superman stuff adds a bit of humor to the mix--albeit grim and depressing humor. I guess there's always ROCKET SAM, BIG TEX and whatnot out there for us folks, though...

I would want to speak up in favor of that short "Super-Man" one-nighter with Jimmy's mom, though, as a kick-off to the graphic novel. It does a good job establishing Jimmy as a kid with father-figure problems, and particularly with abandoning-father problems. It also justifies some of the later appearances of Superman in the book, in Jimmy's dreams and in the form of that sweatshirt of his father's that he's wearing toward the end of the book.

Man, I love talking about this book.

Yeah, he's only really excised the superpowered Superman from the GN; not the whole concept. When you look at it that way, it's pretty elegant the way he's pulled it off editing-wise.

Who doesn't like talking about this awesome book?! When's some academic conference going to invite us all to run our mouths about this, I ask? I can have my "Uses of Linear and non-Linear Perspective in Jimmy Corrigan" lecture ready at a moment's notice!