Lone Wolf and Cub month: Mere mortals (and other superheroes) in Volume 18: Twilight of the Kurokuwa

Here's a page from the eighteenth volume of Lone Wolf and Cub, Twilight of the Kurokuwa, where some starving peasants let Itto Ogami know what they think of him. You can't see them in these panels, but they're the ones screaming and throwing rocks and muck: 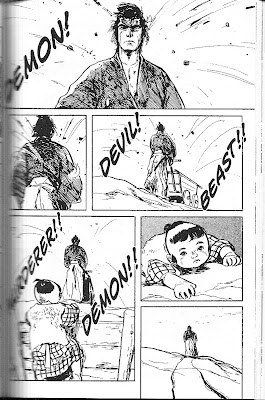 Harsh words, I know. They're upset because the leader of their han (feudal domain) has asked, begged, threatened, pleaded, wheedled, and cajoled Ogami in an effort to get him to loan 9000 ryo (gold pieces) to finance the construction of an irrigation canal. Everyone knows by now that Ogami must have mounds of gold from his high assassination fees, and what better way to redeem those ill-gotten gains than by saving the lives of peasants with a public works project? But Ogami won't do it. He denies that he's saving the money to try to bribe the shogun to reinstate his clan if he should manage to defeat the Yagyu at long last; but he won't say what he's keeping the money for. I dimly recall that he does indeed have a plan in mind, but what that plan is I can't say. Reason enough to keep reading!

Anyway, the peasants think Ogami is an inhuman monster for denying their pleas and seeming unmoved by pity. By now, though, we're used to his assertions that he has to exist beyond good and evil in order to prosecute his quest—though we've also seen, as recently as the previous volume, that a human heart beats in him yet. Still, there are other reasons for thinking that Ogami is not like the rest of us mere mortals, and this volume offers several keen scenes where he fights and moves on a level with superhero stuntmasters—or at least James Bond.

Here's a scene that's just plain cool-looking: Ogami and Daigoro are braving the seas in a little craft—heading for Edo by sea to avoid endangering the lives of civilians on land—when they spot a trail marker burning on a shoreside hill. It's, um, large: 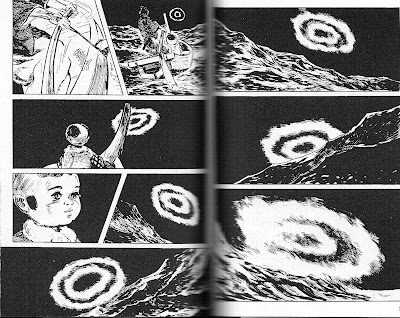 Ogami has been using trail markers made of stones, or even cartoons, to meet his clients for many volumes now, but this is the first flaming trail marker he's seen, seeming to hover like a weird alien eyeball in the night sky.

That image shows something of the hyped-up, adrenaline-charged theatrics (and athletics) that mark this outing, as the series begins its final movement with Ogami's implacable journey to the showdown in Edo. Ogami is at his most James Bond-like in the first two episodes of this volume, where he faces a contingent of the Shogun's own firewatcher-samurai. Here they confront him on some snowy peaks, with some fancy ladder moves answered by Ogami's ski-shod baby cart: 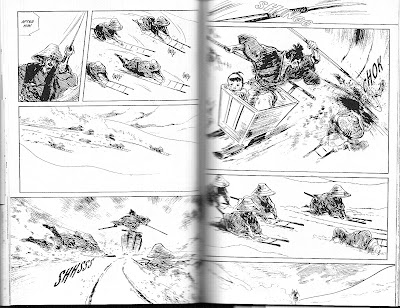 Can't you just see this sequence at the opening of a James Bond flick?

Then, having failed to nail Ogami on snow, the firewatchers pursue him at sea. In this two-page spread, I love the way the ladder assembly leads to a vertical panel stretching the length of the left-hand page, while the right-hand page maps out the geography of the battle quite well: 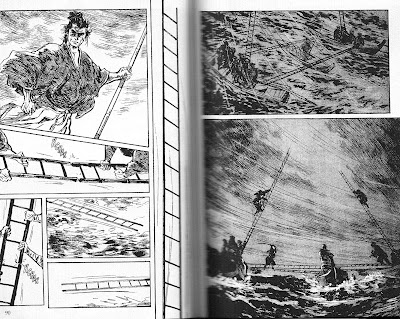 Back on land, Ogami faces the leader of the firewatchers in a final one-on-one duel. Turns out that Ogami's opponent is pretty much a bad-ass superhero himself. Watch how he runs up his ladder to get a height advantage on Ogami; gets his ladder clipped in half; yet then manages to land it, still vertical, in the beach sand to get another few rungs' worth of climbing before he lashes out at Ogami—actually drawing blood from the Lone Wolf: 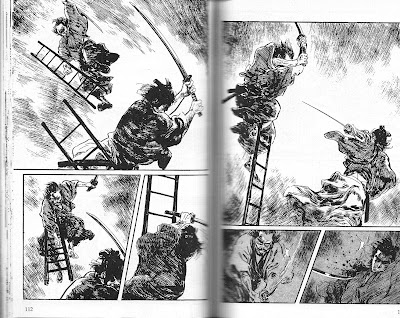 It's some pretty rad fight choreography, and even if the use of ladders as weapon-props seems, well, cartoonish, I'm fine with that. I don't just read this series for its moments of poetic contemplation, after all.

Then again, my favorite moment in volume 18 comes in the wordless penultimate page, from the title story "Twilight of the Kurokuwa." In this episode, five retired members of the Kurokuwa ninja clan—retired after fifty years of service, so they're all quite old and battered—have been forcibly reactivated by Retsudo Yagyu to take out the Lone Wolf and his cub. Well, they don't, but it's the way that they don't that gave me chills when I reread it. It's one of the more moving episodes in the series, and it gains from coming this late in the proceedings, when the stakes can be better appreciated.

I'll say no more about that episode, to leave you the pleasure of reading it for yourself. But I will revisit the imprecations hurled at Ogami at the start of this post. Demon, devil, beast, murderer: after seeing what he can do on land and at sea, seeing what flames he seems to summon from the air, Ogami might well be believed to be any of these. But when the last three surviving firewatchers prepare to bear away their leader's corpse, they say this to Ogami: "Firewatchers are bushi [warriors]—living for bushido [the way of the warrior], dying for bushido! Immortal is the bushi! We shall meet again...if you, too, are immortal."

And this is how Ogami answers: