Lone Wolf and Cub month:
The personal is political in volume 3: The Flute of the Fallen Tiger

In yesterday's post, I looked briefly at the relationship between the Lone Wolf assassin, Itto Ogami, and his young cub, Daigoro. You may recall Ogami's insistence that Daigoro understand the samurai way. In volume 3,

we get a glimpse of Ogami offering such advice to another young person. He's almost tender as he instructs this young daimyo (feudal lord), sentenced to death by seppuku, on how to mime the first ritual cut before the executioner's blade takes off his head: 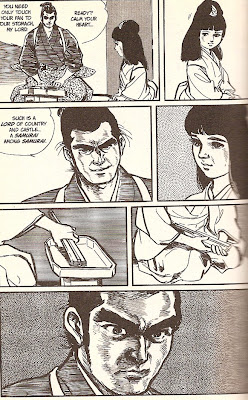 ...but since Ogami is himself the executioner, the tender scene ends this way: 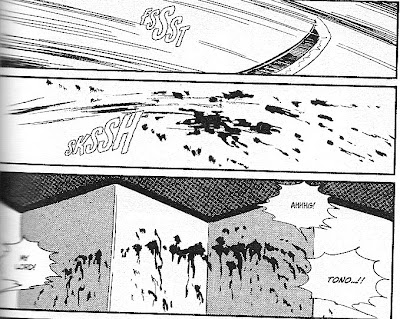 Yikes. So who is this guy?

Or better: who was he? This scene occurs early on in "The White Path Between the Rivers," the seventeenth episode of Lone Wolf and Cub—itself a flashback episode that provides Ogami's origin story, as it were, with the essential background to his skills, his family, and his quest for vengeance.

(Note to Isaac: You asked that I provide spoiler warnings where appropriate. Well, it's hard to know if something is really a spoiler if it occurs only a tenth of the way along in a narrative of over 7000 pages. You may as well consider this the LW&C analogue to Amazing Fantasy 15 for Spider-Man. Read on!)

Ogami, it emerges, was the Tokugawa shogun's kogi kaishakunin—the official executioner, who acted as second for all the daimyo sentenced to death because their own retainers were honor-bound not to harm their lords, even to relieve the suffering of death by seppuku. Since the shogun ranked above the daimyo, it lay in his power to act as second for condemned daimyo without losing face, though the actual executing fell to the hands of Ogami.

Until, that is, the rival Yagyu clan, already dominant in the other two chief offices under the shogun, decided to claim the executioner's role in addition to those of ninja spies and secret assassins. To do this, they had to unseat Ogami. They chose to do so with a combination of deceit—making it seem as if Ogami had designs on the shogun himself—and violence, slaughtering Ogami's household while he was away. Among the dead, his wife Azami, mere moments after she had delivered their first (and hereafter only) child, Daigoro:

Note the tears in Ogami's eyes. He may take on a fierce aspect when the bloodlust, sakki, is upon him, but for all his vengeful determination to walk meifumado, the demon road to hell, he is still human. He must feel it as a man. But he can also take it as a man: 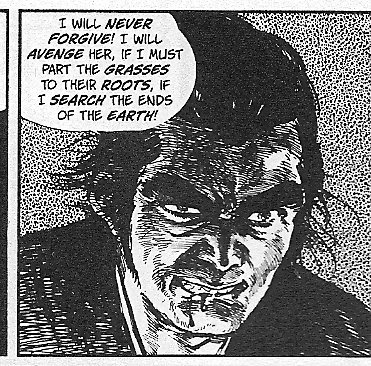 No tears this time: just blood drawn from his own wolf-like fangs as he swears vengeance on Azami's killers.

At the moment of that bloody-mouthed panel, Ogami doesn't yet know that Azami's death was part of an elaborate Yagyu plot to oust him as executioner. Once he figures it out, he realizes that the stakes of his quest for vengeance are far more than merely personal: the Yagyu, led by their elder Retsudo, threaten to undermine the shogunate that Ogami has served honorably all his life: 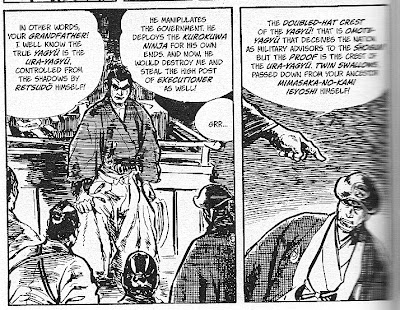 Over the remaining twenty-five volumes (!), Ogami will pursue his vengeance with patience and ruthlessness. He will face Retsudo and other members of the Yagyu clan on various occasions before [spoiler alert!] the inevitable final showdown [okay, not much of a spoiler]. The political dimension never disappears; writer Kazuo Koike frequently drops in expository captions to place the story in the context of seventeenth-century Japanese politics and society. But as Ogami walks the white path between the river of water, jealousy, and the river of fire, greed, his pure heart remains focused on his personal losses with a very clear sense of the persons responsible for ruining his life and turning him into a monster of vengeance: 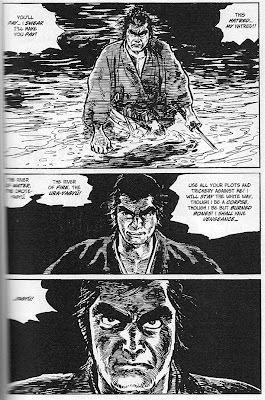 If I may state the obvious:

That guy is a badass.

No kidding! I was *this close* to adding the label "sheer badassery" to these posts. Because that what Ogami displays on page after page.

Frankly, some of the episodes in the first volume seem designed to accomplish little more than showing just how much of a badass he is. I like that stuff, but I appreciate some of the more nuanced bits even more. I swear to God, there are times when the art in this book is like Seth's in its subtle shifts of scene and time; but my lord is this book the anti-Seth in almost every other way!

I'm enjoying these posts, Mike. Makes me want to read more of the series (I read some of the old First volumes and one of the Dark Horse, which I wish weren't soooo tiny).

I hear you, Derik. I was just telling Isaac the other day that, however questionable some of Frank Miller's latter-day work has become, I will remain grateful to him for introducing me (and so many others) to Lone Wolf and Cub in its first (incompelte) US edition from First Comics. Those were thrilling comics, printed at the size of standard US pamphlet comics--so there was plenty of space to enjoy the artwork and to read the text without eyestrain.

I do wish the Dark Horse volumes were larger. On the other hand, I appreciate that they're the size of their Japanese counterparts AND they're not too expensive at that size. And hey, at least when I scan the artwork, it enlarges nicely on the screen!

Incidentally, my love of Miyazaki's artwork in Nausicaa and the Valley of Wind prompted me to do something very unusual for me, which was to buy the same comics twice: once in the four-volume, pocket-sized flipped edition, and once again in a sized-up, seven-volume, original manga-format edition. I wouldn't buy all of LW&C again at larger size, but I'm glad to have about eight issues of the larger First editions (even if the total page count probably adds up to only about two of the Dark Horse editions).

I didn't realize that was the size of the originals. Interesting. It seems an unusual size for manga, but maybe that's just from my lack of knowledge about these things.

I've been tempted to buy Nausicaa a second time. If I want to reread I'm still working from the original Viz pamphlet versions, which is a pain at times.