In his classic study Manga! Manga!: The World of Japanese Comics (which I quote from its 1986 paperback edition), Frederik L. Schodt cited an editor of Shonen Magazine for the claim that "on the average it takes the [Japanese] reader [of manga] twenty minutes to finish a 320-page comic magazine....[which] yields a breakdown of 16 pages a minute, or 3.75 seconds spent on each page. How is this possible?" (p. 18). Now, the weekly installments of various stories in Shonen Magazine may not be exactly comparable to Lone Wolf and Cub, but I can attest that even a Westerner like myself can plough through a 310-page volume of LW&C in about forty minutes with no trouble—and I'm not known as a fast reader.

Partly, as Schodt goes on to note, this speed-reading relies on the greater resort to visual as opposed to verbal storytelling in manga. He then cites Lone Wolf and Cub as "an extreme example. It consists of twenty-eight volumes, or around 8,400 pages. Sword fights sometimes last for 30 pages, with only the sounds of blades clashing" (p. 21). Such extremes have to wait for later volumes, but the fourth volume

of the series demonstrates a variety of ways in which writer Kazuo Koike and artist Goseki Kojima rely on the brushstrokes, rather than the typography, to do the talking.

Here, for example, is one page from a four-page fight scene that occurs near the start of the volume's first episode, the eponymous tale of "The Bell Warden": 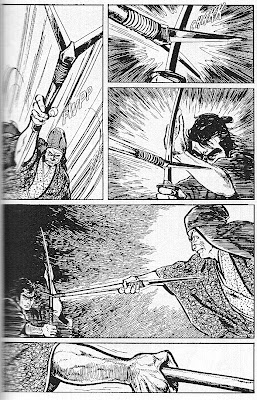 The entire four-page sequence passes without a word or a caption, just the occasional sound effect. Compare this page from Amazing Spider-Man #20, which contains all but three panels of Spidey's triumphant final fight with the scorpion: 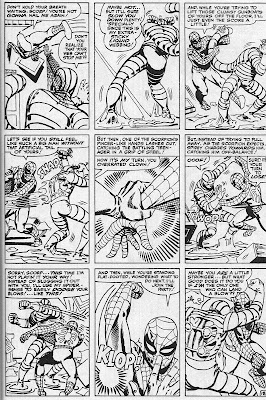 Now, this is hardly an exact comparison, since Spidey is one of the most garrulous of superheroes and Ogami one of the most taciturn of protagonists. Even allowing for the characterization accomplished through Spidey's dialogue, however, there's really no need—or excuse—for Stan Lee's caption in panel five. And at a glance, this comparison shows something typical of the difference between the highly verbal, compressed storytelling of Western superhero comics and the highly visual, expansive storytelling of manga. (Note: I am perfectly aware that this is not news and is practically a cliché of comparisons between American comics and Japanese manga. Still, we don't usually discuss manga on this blog, and I think that the comparison with Spidey's garrulity helps to expose the way that the wordlessness of fight scenes in Lone Wolf and Cub speaks to the different ethos of its world of samurai, which adds to the characterization of Ogami much as Spidey's quips define him.)

Anyway, I think that the frequent use of pantomime pages in Lone Wolf and Cub is refreshing, not only for the trust it evinces in Kojima as artist but also for the trust it shows in us readers to figure out what's going on solely through visual cues. Here's the final page of the second episode in volume 4, "Unfaithful Retainers": 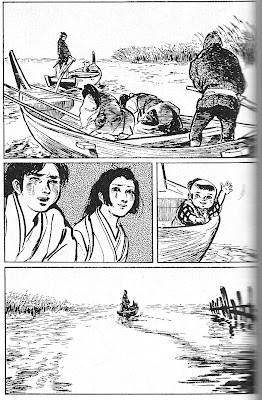 Those kids look happy, don't they, waving to a smiling Daigoro as he sails away with his papa? Well, they mostly look happy. They've got tears on their faces, too. Are they tears of joy? Partly, but only partly. With Ogami's help, this brother and sister have just managed to avenge their father by stabbing his murderer to bits. Their vengeance comes just a few pages after Ogami stopped them on the verge of killing each other in a suicide pact. So, yeah, they have something to be thankful for, having stayed alive long enough to restore their dead father's honor. But how to parse those tearful smiles? That's up to you, not to Stan Lee.

The third episode of volume 4, "Parting Frost," is practically a clinic in how to write scenes visually. Out of a total 58 pages, twenty-five are practically wordless. Fourteen genuinely lack all words, whether captions, dialogue, thought balloons, sound effects, or written machinery in the scenery (e.g., signs or letters). On three pages, Daigoro utters the single word "Papa" in a lone word balloon, and on one page a nameless extra utters a scream. Seven pages rely only on sound effects, as in this sequence where the samurai Iki Jizamon practices bisecting water droplets as they fall from the eaves of a temple: 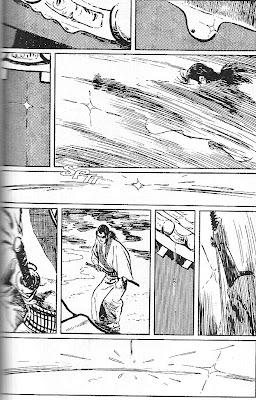 That's a lot of quiet space in a lengthy story—from a quarter to two-fifths, depending on how you reckon the border cases—and that doesn't include the many half-pages where no words are spoken.

There are likewise a number of silent pages in the volume's fourth and final episode, "Performer," an unusually long episode (at 115 pages, it's practically a graphic novel in itself, but for the haste in which it can be read). It's an interesting story, not least for the way a female victim of male sexual aggression pursues revenge by using her own naked torso as a weapon, defacing it with shocking tattoos wherewith to stun and disorient her male foes, whom she then slices to ribbons. At some point I may have to talk about the occasionally lurid bits of LW&C, but since my theme today is pantomime storytelling, I claim the right to remain silent about "Performer" for now.

I have one last comment to add about volume 4, however: I don't think it's essential reading. I mean, I like it and all, but I don't remember its episodes contributing that much to the long arc of the narrative, whereas there are crucial developments in each of the first three volumes. Moreover, Kojima's art in "Performer" seems a little rushed to my eye, and there's a fight scene in "The Bell Warden" (page 63) where I really can't tell just how Ogami managed to split a guy's face open—a rare stumble in Kojima's usually flawless visual storytelling. If you want to know more about various seventeenth-century Japanese trades and practices, seasoned with a little slaughter, then sure, add volume 4 to your reading list; but if time or money are an issue, you might want to skip this one.

*****
Postscript: Apparently, Lone Wolf and Cub's popularity in the 70s was such that it spawned not only TV shows and movies but popular songs. What kind of music best befits this blood-bedrenched epic? Tell 'em, Daigoro! 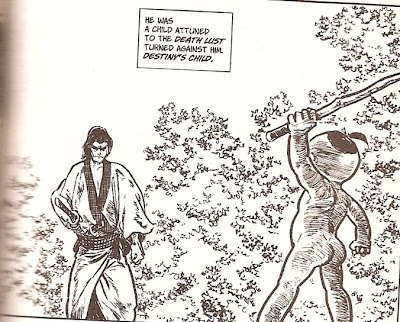 I'm guessing that maybe Beyoncé should leave the singing to Sasha Fierce on this one...
Posted by Mike at 7:35 PM

You know that I love that Spidey-Scorpion tussle as an example of Stan Lee's hyperverbality. Fill every empty space with gab!

'Deed I do know that, O Kaiser. For a moment while posting I thought I already had a scan of that Spider-Man page, then remembered that I was thinking of an overhead projection you made for your class in 2001 (!). Tempus--aw, fuggit.