Lone Wolf and Cub month: Smells like trouble in Volume 21: Fragrance of Death

With only seven volumes of Lone Wolf and Cub to follow, volume 21: Fragrance of Death sets about getting the principals ready for their big showdown, not least because the Yagyu clan and the poisoner Abe-no-Kaii have already failed to bring down Itto Ogami in the ten days demanded by the shogun. It's now or never—but first, the forces need to gather and get ready. The surviving members of the Yagyu clan, now numbering about five hundred fighters, prepare for frontal assault: 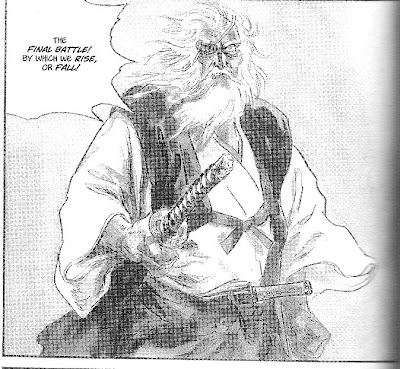 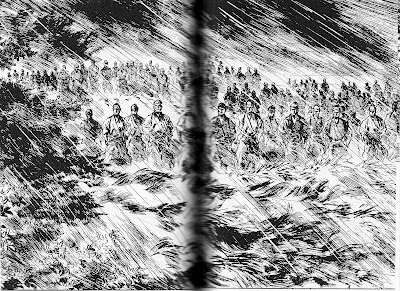 My, that's a large contingent of enemies. They'll be thinned out somewhat even before Ogami faces them, however, thanks to the final, fatal sacrifices of some of Abe-no-Kaii's loyal minions. Since the Yagyu have given up on stratagems, they have no need of the poisoner anymore, and tell him so...precisely so they can trail him as he flees the Yagyu, desperate to kill Ogami first in a bid to retain the shogun's favor. The Yagyu trust Kaii to find the wolf's lair, though he gets a bit of a head start owing not just to his doomed servants but also thanks to the torrential rains that have begun to pound Edo (and that will play a role in the next few volumes).

But I don't want to show any pictures of Kaii this time out. He got the last post almost all to himself, and he's still gross. I've decided that what bothers me most about him as a character is the palpable lack of respect that his creators have for him. He's still a deadly foe; he's still cunning; and he's almost made sympathetic with a flashback scene that shows his terrible childhood (like so many Hollywood baddies, Kaii seems to have turned out bad as a result of trouble in the family when he was a boy). But he's also shown cowering at the sight of blood, readily sending his lovers to die so he can keep a few steps ahead of the Yagyu, and even pissing his pants when Retsudo Yagyu confronts him directly. "Proof you're no bushi [warrior]!" snaps Retsudo. Well, duh!

Anyway, the main interest of this volume for me lies in its revelations and hints about what Ogami has been doing with all his assassination fees for the last couple of years. I won't spoil the secret, but I'll let the following panels drop a few hints. The later panels also show Ogami and Daigoro getting spiritually ready for their final confrontation with the Yagyu by acquiring white silk funeral robes: 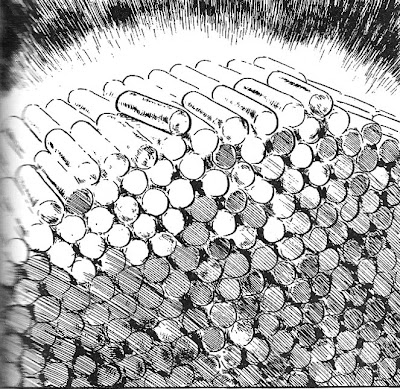 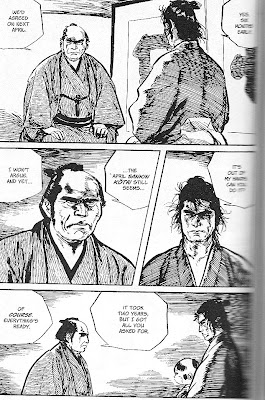 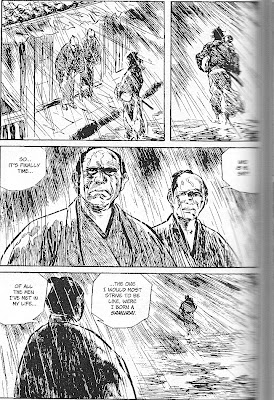 And here they are with the tailor of their funeral silks: 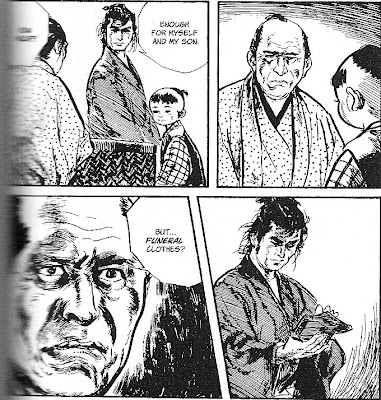 It takes him some convincing to make funeral robes for a three-year-old, but Daigoro himself persuades him at last. And here are our heroes, ready to face the end: 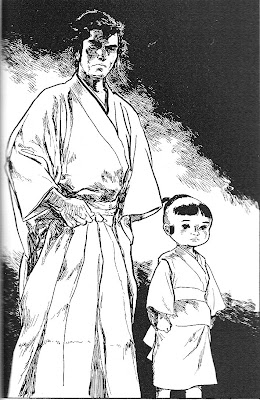 The bearded swordsman reminds me of a certain biblical prophet, especially with the accompanying frame of a mass of Hebr - er, Yagyus amidst the parting Red Fields. Or something like that.