Lone Wolf and Cub month: Scary stuff in Volume 13: The Moon in the East, the Sun in the West 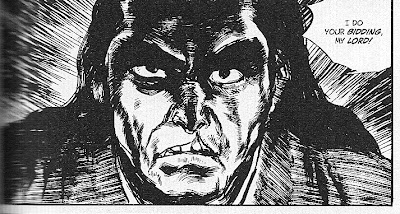 Volume 13 of Lone Wolf & Cub, The Moon in the East, the Sun in the West, is something of a return to form, because once more the plot is thickening away. This time events turn on Retsudo Yagyu's continued resort to his sons as would-be slayers of Ogami. In a flashback at the beginning of the volume, Retsudo remembers how Ogami has slain all three of his acknowledged sons already. And so, with nowhere else to turn, Retsudo summons his eldest son—the unacknowledged son Shobei, whose disfigured face and concubine mother have made him seemingly unloved by his harsh father. Retsudo needs Shobei's sword skills to face Ogami, but he won't even let Shobei raise his head in his presence. Nor will he permit Shobei to call himself Yagyu: he is Hojiro, part of a sub-clan known for its swordsmanship.

The swordsmanship is good enough that Shobei isn't slain outright when he finally faces Ogami (in a scene where Ogami utters some of the harshest trash talk he has yet uttered). He survives long enough to stagger home to his fifteen-year-old sister Sayaka, whom Retsudo has held in abeyance pending Shobei's success against Ogami. You see, Retsudo has no legitimate sons left and no wife, apparently, so he'll need to father another son...somehow. With somebody. Do the math, and you'll compute one of the scariest things threatened in this volume.

Almost scarier is Shobei's attempt to outfox his father in his dying moments: 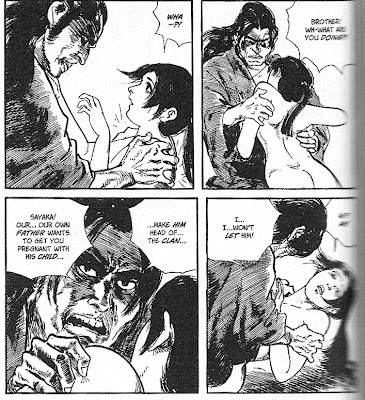 This scene doesn't end as horribly as it might. In fact, it manages to elicit a tiny shred of sympathy for the horrible Retsudo, who himself sheds a single tear. But it's pretty fearsome for a few panels.

And last, before I gotta split, perhaps the most frightening page in the book image-wise: 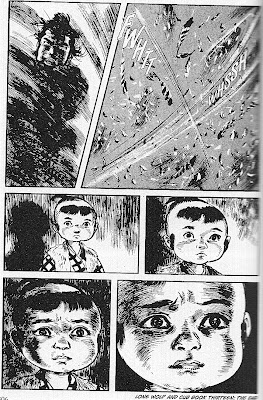 I believe that's Ogami's first assassination of non-humans (the feathers formerly belonged to a pair of falcons named Golden Princess and Silver Princess). To know more, read volume 13!
Posted by Mike at 5:31 PM