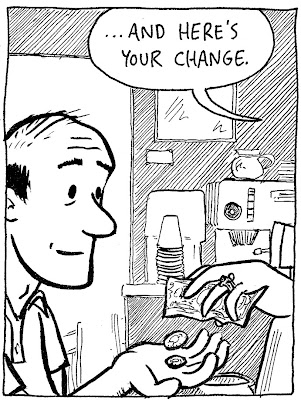 Big news for us here at Satisfactory Comics headquarters this week: our work appears in a newly-published book. We have a couple of pages in a new collection edited by Julia Wertz and published by Three Rivers (an imprint of Random House) called I Saw You...: Comics Inspired by Real-Life Missed Connections. 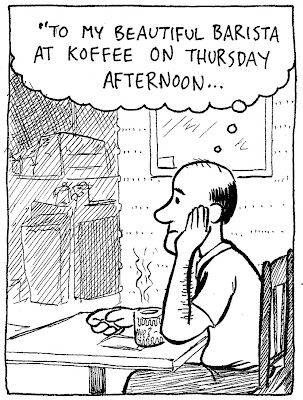 The anthology collects about a hundred short comics by about a hundred cartoonist contributors, each responding to the request to tell a story based on a "Missed Connection" Craigslist posting. It's a fun book to read, an excellent late Valentine's Day gift, and a fascinating sample of the strange and diverse world of alternative / minicomics cartoonists. 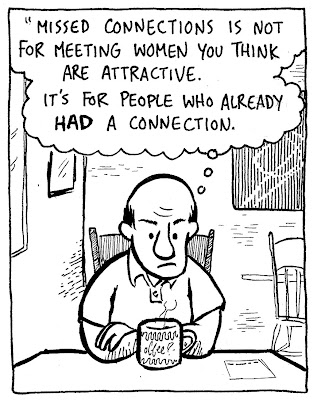 There are some big names in the book—Mike and I are thrilled to be between two covers with Peter Bagge, for example— 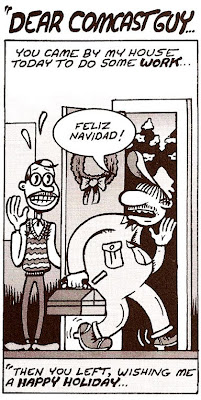 ... but for me, to tell the truth, the greater pleasure is to be in a book with so many of our cartoonist friends: it's great to see Damien Jay, Tom Hart, and Jesse Reklaw in the book, along with people I know less well but really like, like Cathy Leamy, Alec Longstreth, and Sarah Glidden.

(Here are a couple of panels from Sarah Glidden's contribution to the book, featuring a couple that fails to meet at a Dada / Duchamp museum exhibit.) 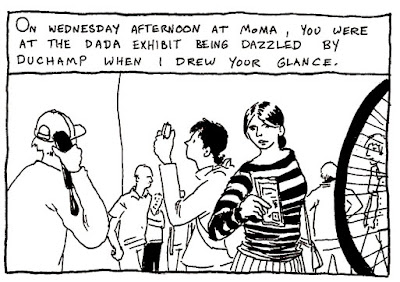 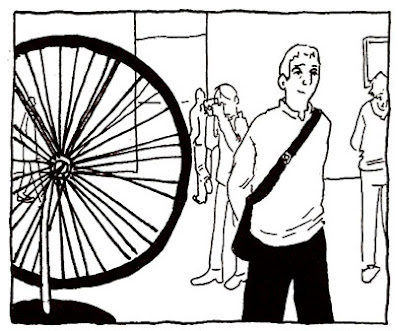 As I said, it's a lot of fun just to read I Saw You..., but for some reason I have also been thinking about the book in terms of its possible classroom uses, even though I know I'm not likely to be teaching "Creative Writing: Comics" any time in the immediate future. Maybe this is because the conceit of the book is almost like a creative-writing exercise: "Find a Craigslist 'Missed Connections' post and make it into a story."

And in fact, one of the most interesting things about the book, for me, is the number of ways that the contributing cartoonists have responded to this prompt. There are several straightforward or not-so-straightforward illustrations of the scene of meeting (or not-quite-meeting), like the Sarah Glidden story I just quoted. But there are also a number of other takes. Several of the pieces show the ad in the process of being written, often by a grotesque mass of lusting flesh, as epitomized in this drawing by Ken Dahl: 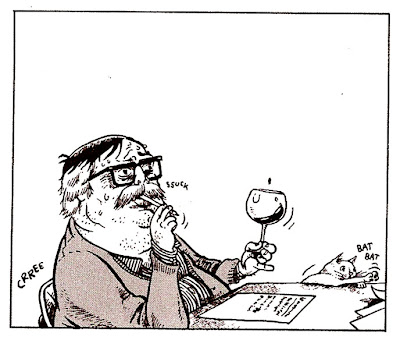 Humor can come from deliberately misreading or exaggerating some part of the original posting—"I'm sorry I didn't react better" is illustrated with the poster delivering an uppercut to an unsuspecting young man in The Ink Lab's contribution; and Kenny Keil's simple five-panel joke offers a positively Wenthean take on "exchanging smiles." There's plenty of fun to be had, too, in simply playing up the ridiculous strangeness that anonymous posting can allow.

A more poetic take on the recurring lonely monologues of the Craigslist board can be seen in Damien Jay's contribution.

Two of my favorite pieces in the book, the ones by Gabrielle Bell and Aaron Renier, don't quite follow the formula but instead tell autobiographical stories about undocumented missed connections and other uses for the missed-connections column, respectively. Both of those stories manage to pack a lot of complicated emotion into just a few pages, and they do a lot to extend the range of the book. Here are a couple of panels from Aaron's story: 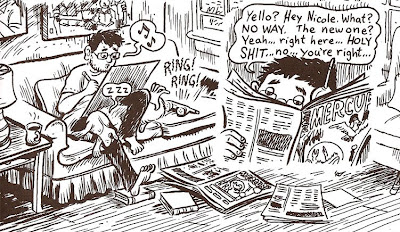 But by and large I Saw You... is a really interesting casebook in transforming found materials into narrative. I imagine assigning it to a group of student cartoonists, then asking them to scour Craigslist and draw comics based on the postings without using any of the same strategies. It'd be a really hard assignment, though.

The other thing that I found fascinating about the book—and to tell the truth, even a little disorienting—was the way that it serves as an anthology of cartooning styles. There are no rules or house styles for drawing in the world of minicomics, and I Saw You... contains a really broad range of drawing styles, as you can already see from the images I've posted. The cartoons range from gawky naïve simplicity to photo-referenced hyperdetail, from clear-line elegance to exuberant brushwork, and from crude and sketchy to careful and tidy.

The best thing this book could do in a classroom for cartoonists, really, would be to liberate their sense of what good cartooning can look like. Would that sequence by Sarah Glidden be more effective if it were drawn more like this sequence by Kaz Strzepek? 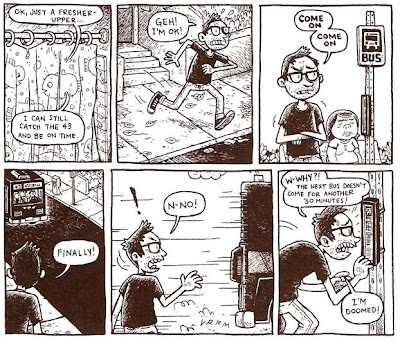 Certainly not, but both of the stories work very well in the styles they're drawn in, and young cartoonists could easily learn a lot from both of these cartoonists.

There are even, necessarily, a few cartoonists that (for me, at least) would serve as negative examples. I'm not a fan of the stiff, photo-referenced, Photoshop-toned "good drawing" visible in the piece by Dan Henrick, for example ... 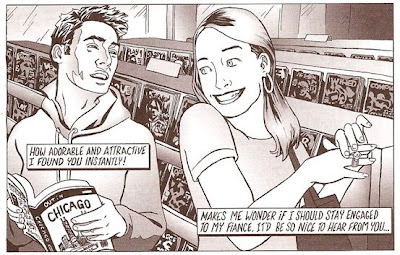 ... though I do recognize that, as one of the book's reviewers pointed out, there's a clever detail in it: the book that the man's holding in this image should have told the woman that her chances were slim.

In fact, thinking about appealing cartooning styles reminds me that I Saw You... has tipped me off to a few cartoonists I'm going to have to watch—people whose work I don't remember seeing before, who seem to be really capable and interesting. These would include, for example ... 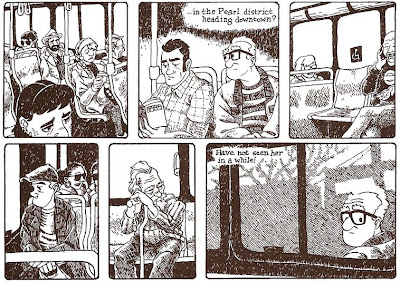 Indigo Kelleigh, whose cross-hatching is some of the most attractive in the book, and ... 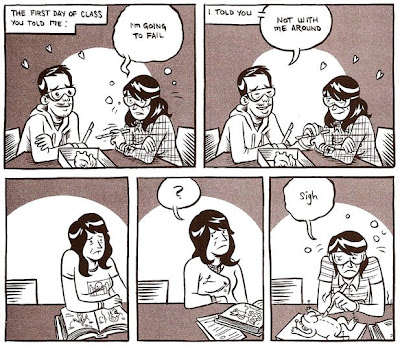 Jonathan Hill, who has a really appealing brush line.

In short (as if that were still possible), I strongly recommend I Saw You..., and not only for Satisfactory Comics completists. It's a small book that packs a big punch. Just remember, in the words of Jeffrey Brown, 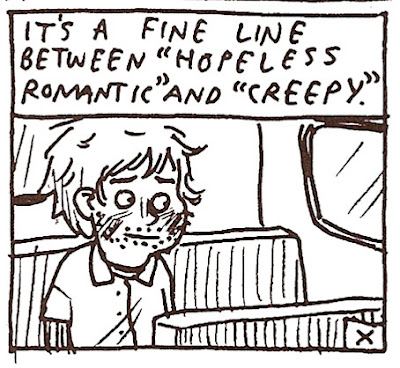 This sounds like an awesome anthology. It's now officially on my "to buy" list. Congrats on placing a piece among such great company!

I bought this over the weekend and enjoyed it! I think it's a fantastic idea and great post highlighting the different styles. :)

For what it's worth, I think your strip would have looked a lot better without the Photoshop gradients. That's a question of personal taste, not any sort of objective aesthetic judgment.

Yeah, no, I actually think you're being completely fair and your points are well-taken.

I've come from a digital background, and the gradients especially do not translate to the printed page at all.

This piece was also done at a time where I was really getting into Gene Ha and Matthew Woodson's work, and I was trying to incorporate some of their aesthetics into my work. I'm not entirely happy with the result, and for reasons you've pointed out. Your review here is a good piece overall, and it gives me some things to think about in the future.

Not Since You comic said...

What a great review! I'm proud to be in this fun little book.

And hey Dan - I liked the style of your strip.

I came across your work because of Julia Wertz's book. I actually have a web-series inspired by Missed Connections and am in the process of trying to expand my reach. I would love for you to check it out! I want to develop a community of sorts of artists and civilians alike who are as fascinated by Missed Connections as I am. Let me know if you have thoughts/ideas