At the end of Volume 9, Itto Ogami successfully stole some official correspondence destined for the shogunate from one of the provincial han (feudal domains). In Volume 10: Hostage Child,

we learn in a brief flashback that Ogami has reason to suspect that this correspondence contains a clue to the Yagyu clan's conspiracy to subvert the shogunate to its own ends. Retsudo Yagyu, leader of the clan, feels threatened enough to solicit some help in tracking down and slaying Ogami. First he sends members of the Kurokuwa ninja clan to do his dirty work (they have their own reasons for hating Ogami now); they, uh, don't succeed. So then Retsudo calls up some archers and riflemen from two other han to join the Yagyu in a face-off. The odds don't look good for Ogami, do they?

That's about sixty visible warriors; it's not clear how many more there might be. How's Ogami gonna get outta this one? 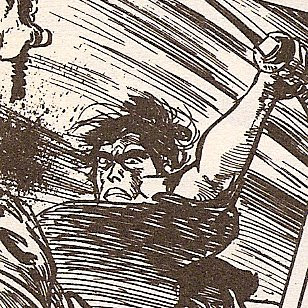 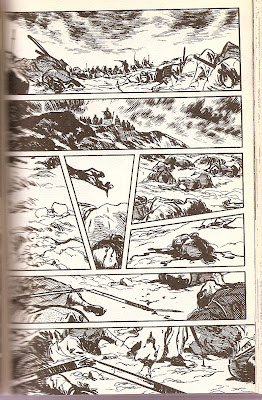 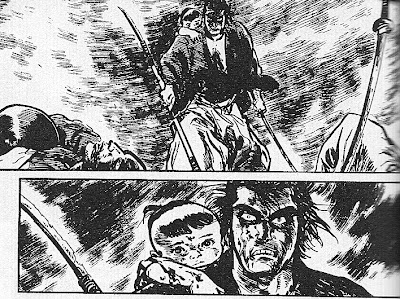 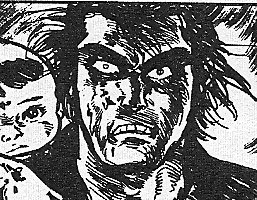 So, um, yeah. Ogami gets out of that one. But it's a tough battle. His baby cart is destroyed, and so too are his nagamaki and naginata blades; even his dotanuki is "as notched as an old saw" now, as Retsudo puts it (you can see these damaged and broken weapons in the panels above). And when Retsudo and Ogami duel on a cliffside, Ogami and Daigoro survive by plunging over the cliffside—accidentally in Daigoro's case, possibly on purpose in Ogami's—only to end up separated for the first time in the series.

Daigoro's solitary wanderings occupy half of the episodes of this volume. In the first, he finds his way to a fishing village. After what he has just seen on the battlefield, is it any wonder that the silvery fish darting in the fishermen's hands take on a frightful aspect?: 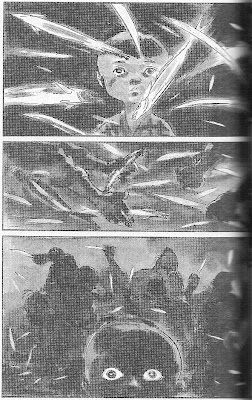 Still later, a half-starved and sun-dazed Daigoro is briefly taken as a hostage by some escaped convicts. When a battle breaks out between them and some jitte-mon police, his blurry vision makes a balletic reverie out of the fighting: 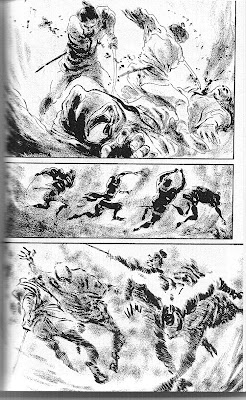 I hope it's not giving too much away to reveal that Daigoro makes it out of Volume 10 alive—though still separated from his papa.

And poor papa: bad enough he has to slay sixty-odd henchmen of Retsudo Yagyu, who always boasts about how superior he is as a swordsman yet constantly relies on underlings, force of numbers, and sheer deceit to try to bring down Ogami. He later has to duel Retsudo again, all because he saw fit to do honor to some Yagyu corpses (dispatched by a samurai who had temporarily sheltered Daigoro) by cremating them, knowing that the smoke from the pyre would attract Retsudo and more Yagyu men. At one point, Retsudo appears to dismiss a parley with Ogami by offering a three days' truce—a courtesy to repay Ogami's courtesy in cremating the dead Yagyu—but once Ogami's back is turned Retsudo directs two archers hidden in neighboring trees to shoot at Ogami.

Understandably, this pisses Ogami off. It's cowardly, it's just not cricket, and one of the arrows gets him in the shoulder, besides. On top of that, hearing Retsudo keep talking about "fair fights" while outnumbering Ogami must be getting old. But I think what must grate at Ogami the most is when Retsudo tries to be witty-sarcastic by calling him "Lone Wolf without cub." Oh, real clever, Retsudo. Almost as clever as Ogami's response: 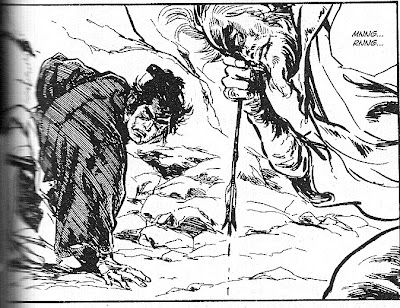 Yeah. Take that. I can't be sure, but that arrow is either one that Ogami plucked out of his own shoulder or it's one he grabbed out of the air as it headed for him. Which he then redirected for a little manga instance of the classic injury-to-eye motif. Oh, comics!

And while our last glimpse of Ogami in this volume sees him collapsing with weariness and injury, he has made his escape so far, on a genuine mountain of corpses. Utter, utter carnage, stunningly, brutally portrayed in exquisitely choreographed fight scenes.

He totally killed the hell out of those guys.