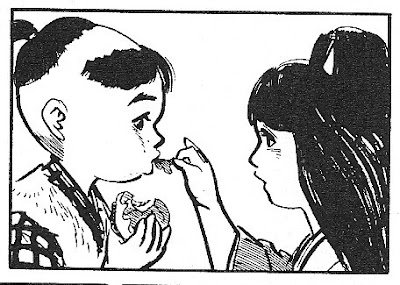 While waiting for my Valentine's Day pizza to arrive, I thought I'd share a few heartwarming images from Lone Wolf and Cub volume 14: Day of the Demons. To my great surprise, each of the four stories in this volume has images or storylines that seem relevant to today's celebration of love, Cupid, etc. The picture above, for instance, shows Daigoro making friends—or is it more?—with the sweet young Omoyo.

Unfortunately, Omoyo is targeted for crucifixion, along with her parents, because they are Christians in Edo-period Japan: 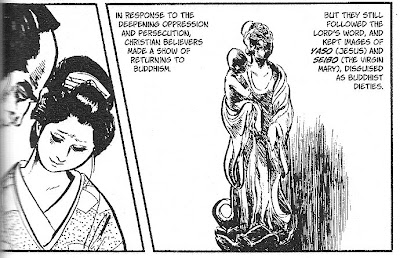 Of course, oppression of Christians recalls the distant origins of Valentine's Day in the vague stories of Saint Valentine himself. And for a little while, Daigoro gets swept up in the anti-Christian roundup owing to his budding feelings for Omoyo, feelings sealed—in true Valentine's Day fashion—with a gift of candy:

Unfortunately, events don't turn out much better for Omoyo than they did for St. Valentine himself, despite the best efforts of Daigoro and Ogami to rescue her.

Other would-be lovers in the volume are also star-crossed. In "O-Shichiri Man," a woman spends most of the episode engaged in what she describes as a "battle" with her ex-husband, the father of a child who died shortly after birth. By the end of the story, they are reconciled, sort of, but the reconciliation isn't likely to get them very far: 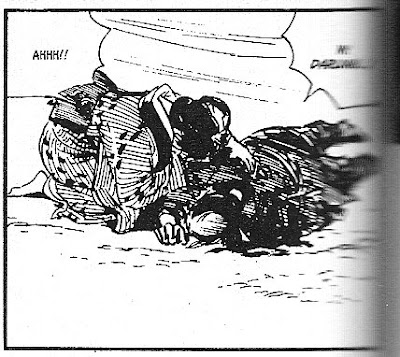 (It's a bit blurry, there, but what she's crying out over his fresh corpse is "My darling..."—so I guess she has forgiven him at last, huh?)

Another story, "One Rainy Day," presents the somber sorrow of Daigoro's curious friendship with a ronin under a death sentence. In many ways, this ronin, Harada Zenbe, resembles Daigoro's father Itto Ogami: he is a remarkable swordsman; a masterless samurai; and a fiercely committed defender of principle and honor. But in a pretty wrenching irony, he differs from Itto in showing real warmth to Daigoro, as portrayed in several pantomime pages of innocent play: hide-and-seek, hopscotch, building sand castles, and other fun outdoorsy activities. The irony is wrenching both because Itto can never indulge Daigoro with such carefree play and because Harada Zenbe's honor had previously cost the lives of his own son and wife. They both committed ritual suicide in solidarity with Zenbe's principled fight on behalf of the peasantry of his han (feudal district), and his thoughts turn to his lost family in images that recall some of the romanticized imagery of shojo manga: 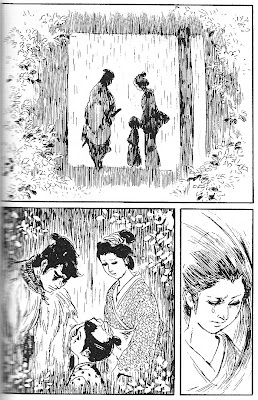 Zenbe makes for a very sympathetic character, and his genuine, generous friendship with Daigoro is moving for its little touches and for the irony that Zenbe knows all too well that the friendship can only last until the day of his execution—a detail hinted at in the episode's title, and whose meaning offers the final wrenching proof of Zenbe's warm concern for the welfare of the child who helped comfort him in the loss of his own son.

Hmmm...On balance, it seems that these would-be love stories aren't turning out so well, after all; Cupid's making a hash of things! No wonder this is how Ogami reacts to this fellow with a bow and arrow: 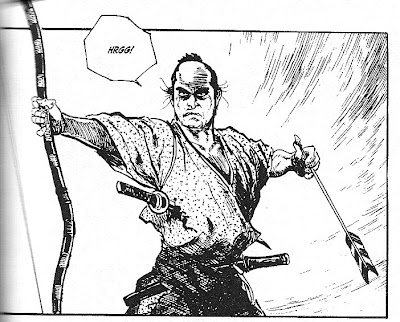 Maybe there will be better love stories in later volumes...though since Ogami's own trail of vengeance began with the murder of his beloved wife Azami, I won't hold out too much hope for hearts and flowers.

I'll close with one last panel from "One Rainy Day," as a salute to Isaac and to Charles Darwin in their coleopterophilia:

It's while trailing that beetle-on-a-string that Daigoro first finds his way into Harada Zenbe's garden, where the ronin sits solitary in anticipation of his sentencing. Yes, a beetle was the go-between for the happiest match (albeit Platonic) in this Valentine's Day volume of Lone Wolf and Cub...which I suppose makes it a beetle for inordinate fondness?
Posted by Mike at 7:36 PM

You know, that beetle might be more appropriate for Valentine's Day than you were even thinking, Mike...

That's HILARIOUS. I had NO idea!