Lone Wolf and Cub month: The fight of the century starts in Volume 23: Tears of Ice

"The fight of the century!" That's what poisoner Abe-no-Kaii says (blurrily) in the panel above, as he takes in the field of battle from his seemingly safe perch atop a roof. And what he says just might be an understatement when Retsudo Yagyu and Itto Ogami finally take up swords against each other with only Daigoro at hand on the sidelines: 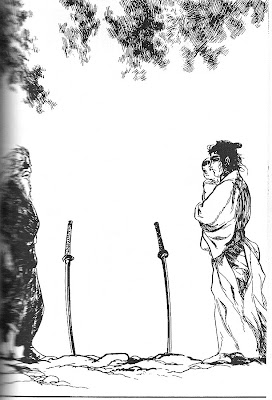 The face-off pictured above comes on page 139 of Lone Wolf and Cub volume 23: Tears of Ice. To reach this point, our four main characters have had to survive the surging flood of the previous volume. During the turmoil, Daigoro was saved from drowning by the hands of Retsudo, who brought him back to his compound to nurse him back to health: 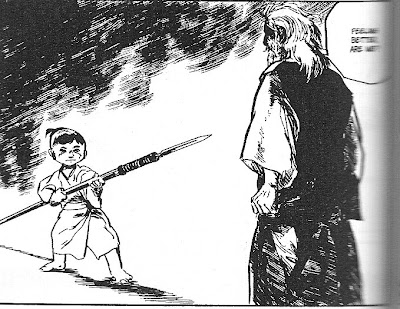 "Feeling better, are we?" asks Retsudo, fist clenched (apologies for the blurry scan!). Retsudo explains to Daigoro that he and Itto had made a pact to return to the field of battle after dealing with the flood, so Daigoro puts down the weapon and suffers himself to be carried by his enemy to the rendezvous. And Retsudo is indeed an enemy, assuring the boy that, once Itto is slain, he'll have to kill Daigoro next. But give credit to the little guy: the first thing he does on rousing from his sickbed and recognizing Retsudo is to grab the nearest weapon and assume a fighting stance. His papa raised him right.

But back to the battle:

Retsudo and Itto face each other on page 139.

On page 140 they grab their swords to begin fighting.

On page 150 they shift their grips.

On pages 152 and 153 they alter their stances (prompting a stunned Kaii, still peering through his telescope, to cry out "Th-they moved!"). There are a few more changes of grip and footing until the first blows are swung on pages 160-161—a full twenty pages after the battle commenced: 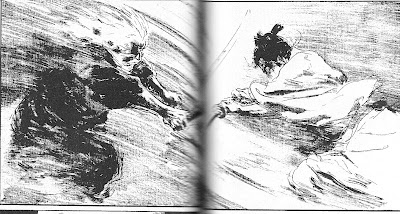 After a lot more grappling, the first blood is drawn—from Ogami's cheek—on page 172, after devoting more than half of this episode, "The Day of Meeting," to the first few movements of the battle. And it continues in much this way till the end of the volume on page 308: lots of closeups, lots of small movements, lots of waiting around until a sudden burst of action, occasionally with the edifying identification of a special move by either Retsudo or Itto. I count 89 pages of wordless combat, with another half-dozen at least where the only words are grunts or war-cries. Yet the pacing is so good, the composition so gripping, that the story doesn't drag; nor does it stop being a story. Retsudo and Itto keep finding ways to test and challenge each other, keep provoking each other to still more superhuman feats of endurance, keep refusing to back down.

Ultimately, however, they do come down: not back but forwards, falling headlong into the now snowy fields of Edo as the rain has begun to freeze. Mere weariness and cold suffice to send Abe-no-Kaii tumbling from his rooftop, hours and hours after the noontime battle has stretched into the moonlit night; and he doesn't look so good where he's landed, feeling no sensation in two limbs and coughing up blood:

And before him, little Daigoro could hold out no longer, having endured longer (and endured more) than any other almost four-year-old tyke could imagine: 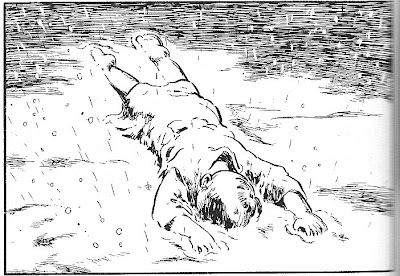 And then, our swordsmen fall, victims to Kaii's wicked stratagem of coating their blades with poison as the swords awaited their return to the field of battle. Cunning warriors that they are, Retsudo and Itto figure out that someone must have poisoned their blades prior to their rendezvous (and they have a good idea who that someone might be), but even they cannot hold out indefinitely against poison. Retsudo falls: 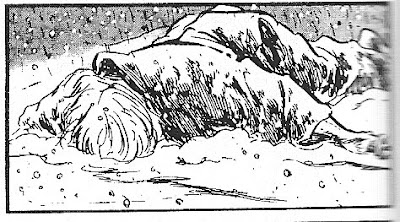 And that looks like it could be all she wrote, but for those last three words there—"To Be Continued"—and the knowledge that, with five volumes to go, there's still about fifteen hundred pages left in the series. But the end is in sight!

POSTSCRIPT:
It's a bit depressing to end with the four main characters all face-down in the snow, so here's a page where both Itto and Retsudo display their mastery of a crucial Yagyu sword-capture technique: 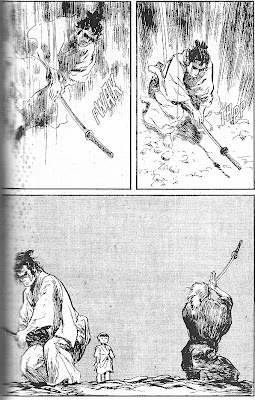 Note that Itto is grasping Retsudo's sword with his hands flat on the blade's side, the point facing him—but not piercing him. Retsudo, on the other hand, has used the more classic Yagyu sword-capture technique, as featured many volumes ago, in which the tip of the blade actually digs into his brow slightly. He's bloodied but far from finished. Anyhow, this panel gives one example of the kind of sword-fighting clinic that makes up much of this book, and since I hadn't yet shown any panels of the classic sword-capture move I figured it was time I did so...
Posted by Mike at 11:27 PM

Dang. Nicked in the forehead by a poisoned samurai sword that you catch between your palms?

Someone contact Chris Sims. This has passed over the threshold of awesome into insanely awesome. Since there are no car batteries to be thrown in feudal Japan, and no bears to be punched, I think these guys may be reaching local limits of awesomeness already.

Also, that last panel you reproduced there is an incredible piece of composition.

Isn't that last panel rad? And there are dozens that are that good in this series: dozens!

By the way, owing to a slight oversight on Abe-no-Kaii's part, the POINTS of the swords are not poisoned--he didn't remove them from the ground when he smeared them with the deadly stuff. But they do get some venom in their bloodstreams with the later blows from the sword-edges. Anyway, I may have another word or two about the poison tomorrow.

...and in fact I didn't say anything more about those poisoned blades in the post on volume 24. You'll just have to read volumes 23 and 24 to find out why they haven't perished from poison!