This week's Doodle Penance is brought to you by an anonymous Google-searcher who found our site when looking for "12 reasons for penance." That strikes me as an unusually specific and limited request, in terms of the numbers. Having been trained in guilt for many years in graduate school, I can think of many more than a dozen reasons to be penitent. Still, we're happy to oblige...

Since we're both pretty busy this week and the blog hasn't been hurting for content, Mike and I decided to divide up the dozen reasons. Here are my half-dozen: 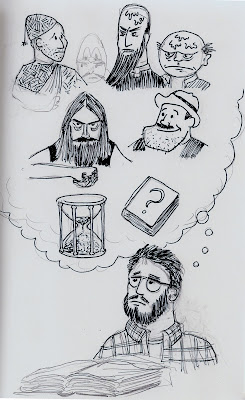 (You may click if you want a better view of my looming guilt.)

These are all reasons specific to my guilt as a cartoonist or a comics critic, and they are all guilts that derive from inaction (or from the opportunity costs of my other actions), rather than the many bad things I have done.

Then there's the Mapjam, which is a project with some real potential. Why has it taken me two years to draw a three-page story? What would it take for me to get that thing underway again?

Oh, and the essay on Alan Moore's collaborative practice, which I've been meaning to edit a little bit and deliver to the good folks at Secret Acres—two days' worth of work, tops, which I've been postponing for more than a year and a half. Let's let the Moore essay stand in for all of the many essays I haven't written, including that nearly-finished thing that Mike and I were working on about comics and set text.

Then there are the blog posts I have planned but not written. That's a different category of guilt, since not writing them doesn't really hurt anyone but the blog. Still, I am wondering why I still haven't written the third of my three "Swansea Find" posts, which is supposed to be about Dudley Watkins's Desperate Dan. I was in Swansea back in July. How long could it really take me to write that post? And when am I going to post my other finds from the Joe Stinson Collection, for that matter?

And then there's the general woeful matter of squandered time. Could I have back all the time I wasted on, say, Civilization? (And that's not even to mention the egregious, awful time-squandering of summer 2007.)

And, finally, the most painful failure: I've got a book to write, and it's not exactly writing itself these days.

Writing this post was a little more painful than I meant for it to be. Now, if you'll pardon me, I'm going to spend the rest of the day grading papers as fast as I can and staying as far from the internet as I can.

...With that in mind, Isaac—this is Mike writing, now—I will refrain from sending the usual e-mail alert when I have completed my half of the proceedings and posted it to the blog; far be it from me to enable more guilty feelings in your day!

I don't think I care to get quite as specific as you did with the rehearsal of one's own personal failings. Not because mine aren't legion, but because I don't trust myself to stop before it gets too maudlin or icky (see, there's a perfect example of what I mean right there!). Indeed, I have depersonalized my doodle, as well, relying on abstract iconography for the most part, so I'll have to decode it in prose after this image: 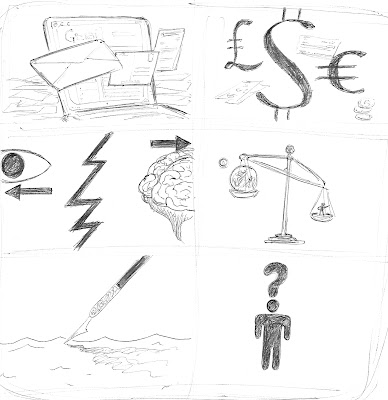 What we have here is almost a mini-narrative of regrettable deeds, misdeeds, or failures to act, though in several cases the ill could just as well be a good were it reconsidered or redirected. From top left to bottom right in usual reading order:

1) Correspondence. I don't stay on top of it as I should.
2) Finances. I should really keep my eye on the ball more carefully and more often.
3) Inattention. The images here are meant to suggest "out of sight, out of mind," though that's one of the worst attempts at a drawing of a brain I have ever committed.
4) Skewed values. The item on the left of the scales is the earth, complete with its moon. The item on the right is a single person and his comfort. (I wonder who it could be?)
5) Reliability. There's an old saw about the dependability of oaths written on water. Note how the ink immediately leaches away into an indistinct blur.
6) The insufficiently-examined life. Hence the question mark for a head.

In the case of the original doodle, the medium is indeed the message, for I sketched it out on one side of a still-unopened envelope that instructs the recipient, "Please respond within 4 weeks." I can't remember when it arrived, but the other side of it furnished the drawing surface for a doodle penance post from January 4. (In defense of the recipient, the instruction might have been more persuasive if the senders had seen fit to identify themselves.)

And now, having indulged in this self-flagellating exercise, I repent of our having chosen this topic for Doodle Penance. Henceforth, let the good times roll!
Posted by Isaac at 12:15 PM

Isaac, at first I thought your doodle was unfinished, but now I reckon those penciled-but-not-inked sections are meant precisely to indicate the incomplete or suspended state of, e.g., Matteu? It's a thoughtful touch.

That's part of what I had in mind. Also, I thought if I inked that penguin guy (Karel) he would just look silly.

I know, I know; "It's a black-plumed mountain owl."

I hadn't wanted to erase any of my pencils, but I had botched Desperate Dan's hat (even worse) in the pencil stages, so I needed to clean things up back there.