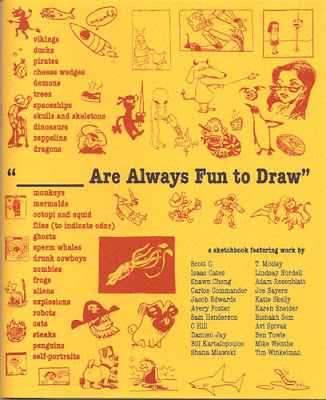 Some time a couple years ago Mike and I were talking about doing a series of drawings of things that we simply found fun to draw. I think the initial idea was that we'd each do a page from some sort of master list, then put the results in a new Satisfactory Comics in the unspecified future. Then it started to seem reasonable to invite a few other cartoonists in on the project. And before long this little thing had ballooned into a book in its own right.

Here's what went into it: I polled twenty-two cartoonists (including Mike and myself), asking for lists of forty things that each given cartoonist considered to be "always fun to draw." As these came in, I collated them into one big list, putting things closer to the top if they got named by multiple cartoonists. Eventually, I had a "master list" of the thirty most popular items (each of which had been nominated several times), plus a long addendum with interesting things that had been named less frequently.

Each of the twenty-two participating cartoonists then had to draw, on a single page, the thirty most popular items, plus at least ten items from the rest of the list. Just to give you a taste of this, the top ten items were as follows: skulls or skeletons, dinosaurs, robots, octopi or squid, space aliens, cats, monkeys or apes, rockets or spaceships, demons, and fish (especially in goldfish bowls) -- so you'll see those things, plus at least thirty more, on every page.

A couple of people -- most notably Sam Henderson -- tried to include every (or nearly every) item on the list. Others, like Bill Kartalopoulos and Ben Towle, drew up a grid and filled precisely forty boxes. Some people let the cartoons sprawl over an empty space (like Scott C. did), and some put all the elements in a single scene: Karen Sneider's epic battle is hilarious, and Avi Spivak's midnight monster mash is full of crazy energy. Tom Motley turned his list into a hidden-pictures image, with some things literally in the scene and other things hiding in its negative space.

I made mine into a poem, a little primer verse about the Fun-To-Draw alphabet. 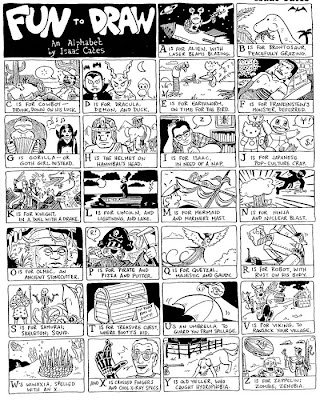 That's probably too small to read, even when you click on it, because it's a pretty detailed page. (I like to work at a pretty minute level of detail.) Here are a few of my favorite couplets, presented a little closer to ths size at which they were drawn:

Mike's page in _________ Are Always Fun to Draw is a complete scene, also full of fun details. His self-portrait (one of the required items) drifts downstream in an overturned umbrella (another required item), looking out warily over a crazy variety of other things: 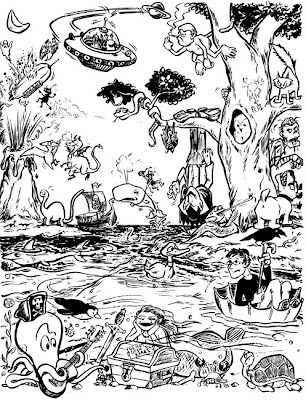 For my money, a big part of the fun in this image is in the details -- things that are too small to show up well in that jpeg. Off in the distance, an angel whistles while a demon burns up a zeppelin: 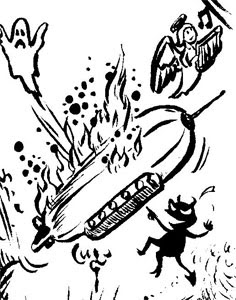 ...and just below that, two flying reptiles (one historical, the other mythical) confront each other with alarm and consternation: 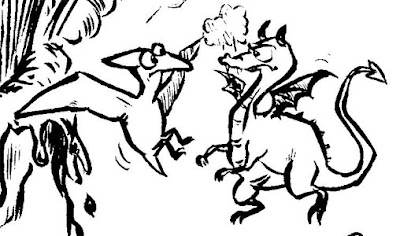 I'm telling you, the book is at least as much fun to look at as it was to draw.

You can see a few of the other pages in Shawn Hoke's review of the book, but let me also bring in a few of my favorite samples or selections. Lindsay Nordell outlined her page as a series of "inconclusive battles" -- like Abraham Lincoln vs. Sherlock Holmes, or like these two: 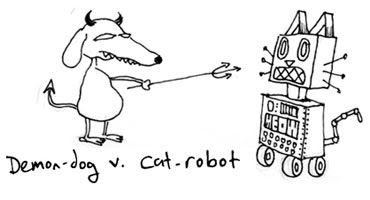 Some of the pages are just beautiful, like the one provided by Bishakh Som. (This small sample doesn't quite include the monkey DJ that might be my favorite part of the whole image.) 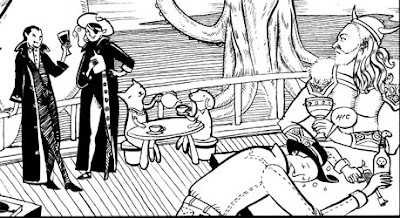 And what could be more fun than the doodly spread contributed by Scott C. of Doublefine Action Comics? I've moved a couple of items around, here, to make it fit more neatly in a rectangle, but this is less than a quarter of his page. You're looking at a gun, an umbrella, a turtle, a demon, an eyeball, a bat, a viking, a car crash, a drunk cowboy, a sperm whale, Hunter S. Thompson, a self-portrait, and a volcano. 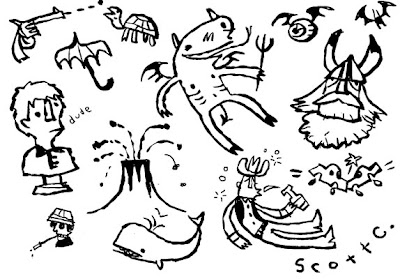 See what I mean? Fun.

If you'd like to own this little book of fun, you can order it from our Storenvy shoppe.
Posted by Isaac at 8:22 PM