On this Friday the Thirteenth, I give you our version of Walt Kelly's Churchy LaFemme, a turtle who is mortally afraid of said date, as pictured in Satisfactory Comics #1 (Dec. 2001): 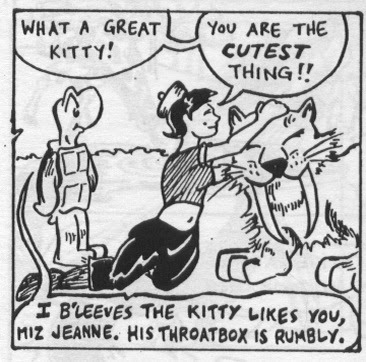 The original Churchy would typically react to Friday the Thirteenth like this (as portrayed by Kelly in the early 1970s): 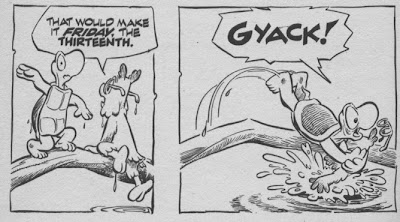 You may be wondering what Churchy is doing in our comic book. One of the things he's doing is establishing a precedent... 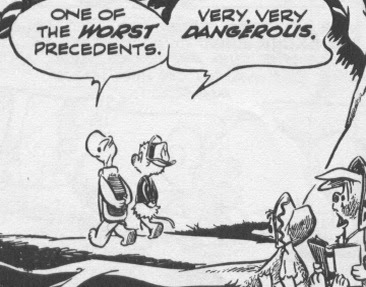 ...Well, I'm not sure about that. But ever since the first issue of Satisfactory Comics, we have made it a practice to include at least one swipe* from another cartoonist, so there's a precedent, all right; and it is also true that the use of such images can be controversial or problematic (not to say dangerous) depending on the circumstances. So I'd like to talk about swipes in general in a later post.

For now, though, I want to explain why Walt Kelly got the nod as the first cartoonist to whom we've paid homage in our meager way. Among comic-strip enthusiasts, Kelly's Pogo ranks as one of the greatest works in the canon of classic American strips, and though I also love and admire Krazy Kat and Peanuts, for me Pogo takes the palm. I first came across a Pogo book on my parent's bookshelves at the tender age of seven, and it is no exaggeration to say that Kelly and his work have had a decisive influence on my subsequent development. Though I had enjoyed drawing as long as I can remember (and I remember a few Spider-Man drawings from kindergarten), it wasn't until I read Pogo that I started drawing my own comic strips, within days of devouring Prehysterical Pogo (in Pandemonia) (1967). It took a long time for me to stop deliberately aping Kelly's work, and to this day my natural cartooning idiom shows a heavy Kelly influence, not always in evidence in my two-brained collaborations with Isaac. For me as penciller of this first issue, though, it was a no-brainer to choose a character from Pogo for our first swipe from classic comics, even if I can't remember which of us proposed Churchy as the appropriate critter from the extensive Pogo repertory.

Some notes on the swipe itself: our imitation extends to Churchy's dialogue, which parrots the swamp-speak mishmash of Kelly's Okefenokee denizens, as well as to Isaac's lettering and inking, which strove to achieve a calligraphic thick-and-thin variation with the unsupple tool of a Micron fiber-tip pen. As we have continued as cartoonists, we have expanded our toolkit, and today neither of us would be so foolhardy as to attempt a Kelly-esque line with a pen that offers so little give. If we're feeling confident, we'd probably use brush and ink, as Kelly did, though more likely we'd rely on our trusty brush-tip pens. In a pinch, we might try to get the right effect from a nib pen, which is what I did for years before I learned that Kelly's line was from a brush (not a self-evident fact to the untrained seven-year-old eye).

This panel featuring Churchy is not the only homage to Kelly in our comics, though it's the most blatant swipe. Satisfactory Comics #4 invokes Kelly in all sorts of ways throughout, and so do a couple of panels in our Treatise Upon the Jam. In a way, my first contribution to the Mapjam project also alludes to Kelly's overwhelming influence on me—overwhelming and apparently continuing!


*Swipe is the term used by cartoonists to describe the use of another's images for reference, parody, or homage, though it can also refer to the work of rip-off artists who do not acknowledge their indebtedness to their predecessors. Since the very rendering of Churchy and his dialogue in a more calligraphic line shows a difference from our usual work in the first issue, we do not believe that our quotation of Kelly's image represents an attempt to pass off his work as ours. Moreover, we included Churchy precisely so that he would be recognized; and if any readers did not recognize him previously, I hope this post will direct you to Kelly's comics, which offer more than mere satisfaction—though I'll let Kelly's original have the last word here: