One thing I neglected to mention in my write-up about Satisfactory #4 is the way we dressed up the cover to make it look a little like a superhero comic from the '70s. That is, we had this silly faux-advertisement on the inside front cover ... 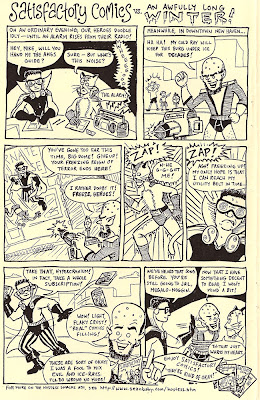 (You can see our local comics store, Alternate Universe, in the background of the third panel.)

... And this directory of our contributions and contributors appeared on the back cover: 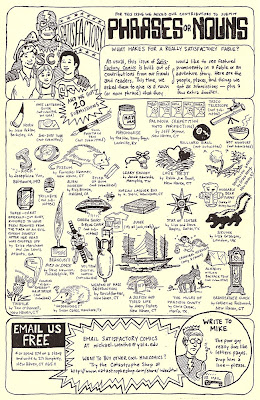 In both cases, you can click on the pictures to enlarge the comics to a legible size.

The first one is pretty obviously an imitation or parody of the Hostess Pies / Twinkies ads that used to appear in superhero comics. I like the way those randomly-tossed comics look just a little like fried fruit pie wrappers. (The best internet resource for these is probably Seanbaby's Hostess Page. In fact, reading his assessments of these ads inspired us to do one ourselves.) You can see Big Dome fighting Superman instead of us on this page.)

The second of the swipe pages is a little more obscure, but something about it must have burned into my brain at the appropriate age. Here's a page that begins with a scan and a discussion of a "Captain O" advertisement similar to the one we were working with, though I think ours actually included a "huggable bear puppet" and a Voltron digital watch.

My favorite thing about our Captain O parody / swipe is the way that Mike wound up dressed as the Olympic phone operator, who looked the same in every advertisement, but had a different name each month. (Presumably so the company could keep track of which of their ads was working.) Here's a little comparison: 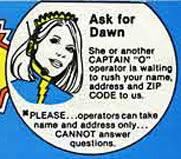 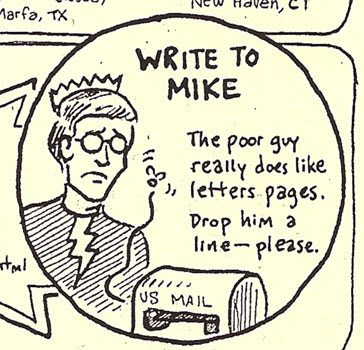