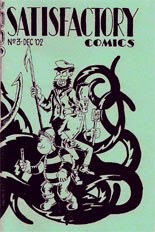 Of course, you might not think it's so simple when you hear how we made it. The project started with sixteen people (including Mike and me) working together on the story that would become the script, using Nick Beauchamp's amazing Democratic Writing website. Every chunk of the story could be voted up, voted down, revised, or expanded, and everyone got an equal voice in the final draft. (You can view the final draft, and link through to the project page with all its voting, from here.)

From there, of course, Mike and I tried to tell the story in twenty-fours hours, in the time-honored tradition of the 24-hour Comic invented by Scott McCloud. (This is the first of our three attempts at a 24-hour comic so far, and it's also the shortest: we drew sixteen pages in sixteen hours, then called it finished. I think this had something to do with the premiere of The Two Towers that evening. Well, and also the story was finished by the end of page 16.)

Most of that process is pretty much invisible if you're reading the comic, which is by turns silly, stupid, violent, and punny. Here's a glimpse of the story's climax, which occurs after Herman the Harpooneer and his companions are swallowed by the Kraken: 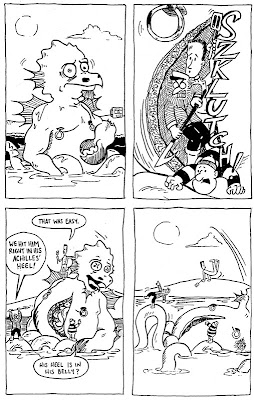 (You can click on that image to see it a little larger.)

This issue also marked the first appearance of the cannibal mermaids, who quickly took on a life of their own, and have made cameos in a number of our subsequent comics. Here's one, buying out Autolycus's Bratwurst & Pilsner stand, leaving nothing for the two of us (in our own cameo appearance): 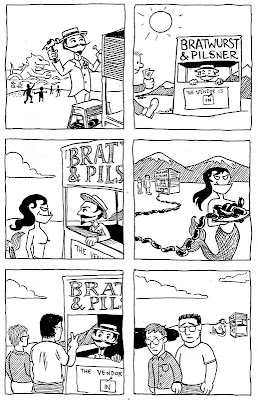