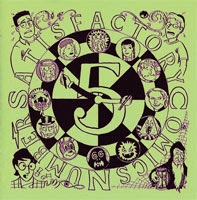 The fifth issue of Satisfactory Comics was our second attempt at a 24-hour comic, and it turned out to be both the longest and the shortest issue up to that point. (It was the longest, at 24 pages, and the shortest, at only five and a half inches tall.)

The story in this one concerns a schoolgirl named Cassia who has been summoned to the Museum of the Horrible to help some of the creatures who live there. It turns out that the King of Fleas is making progress in his plan to take over the world, and Cassia has to stop him.

First, she'll have to get past two of his goons -- a creature in karate pants and a stovepipe hat with blades for hands, and a German-speaking cobra-headed dachshund in a wheeled harness. (That sentence should give the search engines something to chew on!) Here they are now: 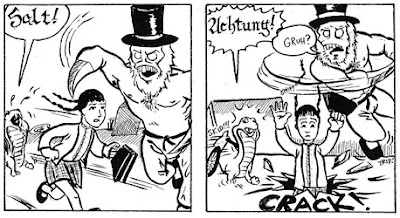 Where did these crazy entities come from? Well, for this issue we asked a dozen of our friends and readers to submit a frightening character, and all twelve of those frightening characters appear in this issue. (Yes, even Paris Hilton and the re-elected George W. Bush make appearances, though they only appear as portraits in the Hall of the Most Horrible American Presidents, along with U. S. Grant and H. M. Singeberry. Apparently the story is set some time after the year 2025.)

When Cassia does finally confront the King of Fleas, his plan — and his infernal device — sound a little improbable... 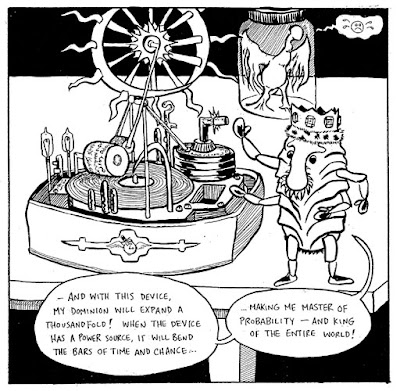 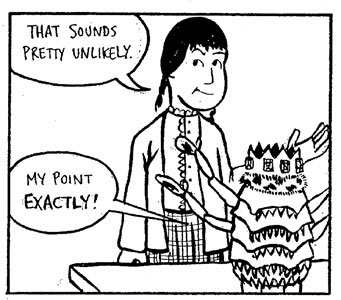 ... But will that keep Cassia from stopping him? What kind of a comic would end with the bad guy victorious? (How satisfactory would that be?)

(As usual, you can click on those pictures to bring them up to legible size.)

Satisfactory Comics #5 is 24 kid-friendly pages, and you can have it for a mere $1.75 by Paypal, a scant $1.50 by check, or a measly dollar if you get it from me in person. Here's the Paypal button, to make buying easier: