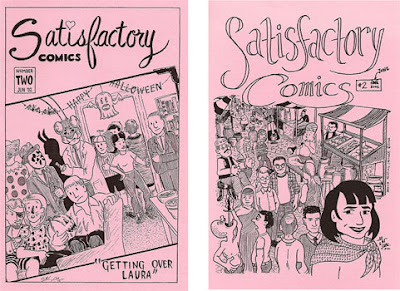 The concept of this issue of Satisfactory Comics has caused problems at the xerox place: it's a flip book, with two stories that begin at opposite ends of the book and converge in the middle. It's also a Valentine's Day issue, even though it wasn't finished until June. Both of the stories, "Getting Over Laura" and "Turkish Delight / If You've a Date in Constantinople...," feature lovelorn protagonists: Rob is a surfer trying to get over his lost girlfriend, and Yeliz is so dissatisfied with the men in her home town that she sends away for a package from "Stable Relationship, Inc."

Rob gets some liberating advice in a dream, after swimming to a statue that looks a little like Botticelli's Venus: 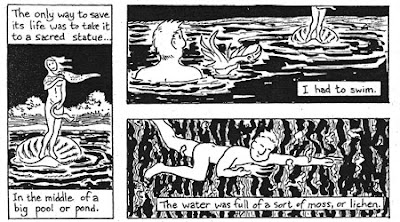 Yeliz, meanwhile, finds herself in the hands of three "What-If Men," each of whom embodies an extreme version of a possibly desirable trait. Maybe it's not necessary to say that these dates don't go well: 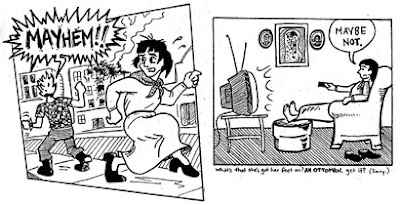 ... But we don't want to spoil the ending of either story.

For this book, we also solicited panels from our friends, as did a separate team of cartoonists on the West Coast. (They turned their eight panels over to us when it became clear that they couldn't do half of the comic after all.) This time, the panel guideline was "Something you would like to see on Valentine's Day." From there, we put the panels in a random order, with submissions from men on one side of the comic, and submissions from women on the other side. (This time, we didn't roll a die to determine where the panel went on the page, thank goodness.)

Satisfactory Comics #2 remains one of our favorites, even though there are places where the cartooning looks a little clumsy to us five years later. It's also the book we've reprinted the most often: it's on its fourth printing, if you can believe that. It's sixteen pages long, with letters pages on the inside covers. Panel contributors this time include Shawn Cheng, Jonathan Lammers, Rob Clough, Mic Duggan, Jason Biteng, Chris Davidson, Anna Kuo, Rachel Rhodes, Tara Prescott, Erica Sayers, Kathranne Knight, Zina Deretsky, Shawna Ryan, Emily Hodgson (now Anderson), and the two of us.