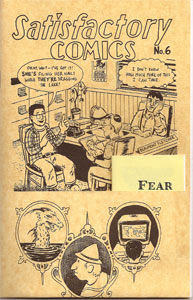 Our sixth issue is a complex little anthology, loaded with extras. It features five stories on the inside of the comic, and one bonus comic inside each of the pockets (front and back) on its cover.

Inside the front cover is our adaptation of Ciaran Carson's sonnet "Fear," which appears in The Twelfth of Never. You can just see that tiny yellow minicomic peeking abashedly out of the pocket in the image of the front cover, above. Inside the back cover is a set of eight cards, each of which has a panel of comics on either side. 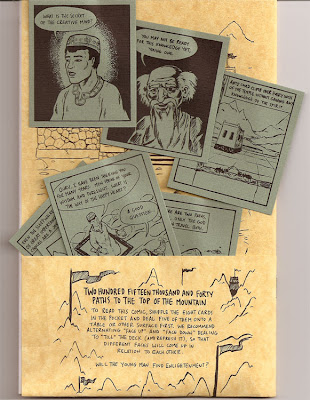 Dealing these cards out into five-panel strips will give you more than 215,000 possible comics, and although we can't testify that every one of them makes the most crystalline sense, the subject of these cards is a search for enlightenment, so there's no reason they should all be perfectly scrutable on first reading. (Actually, our readers report that most of the combinations work quite well.)

Inside the comic, you'll find our first two entries in the Mapjam project, plus three other pieces. First, there's an autobiographical essay called "Killing Time, or How I Beat Civilization." This seven-page piece was originally a submission for the 2004 SPX anthology (which was on the theme of war), though the editors didn't accept it. It's the story of Isaac's involvement with strategic conquest computer games, how he kicked that habit, and how the games still influence the way he sees the world. (As usual, you can click on this image to bring it to legible size.) 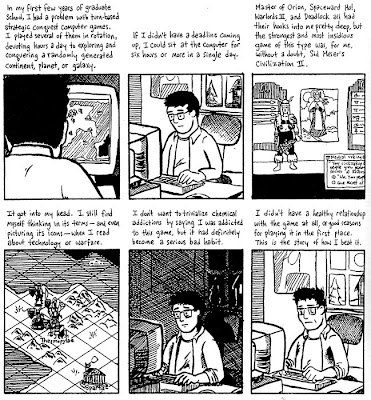 The second seven-page story in the comic is "The Case of the Shifty Shavian," a detective story that is also a sestina in comics form. (If you're not familiar with the sestina as a poetic form, its rules or conditions involve the structured repetition of a set of six words, one at the end of each line in the poem. Our comics version of the form has these end-words repeated as the final words (in dialogue, captions, sound effects, or ambient text) in each of the six panels on the page.) The hero of this piece, Beaumont Fletcher, is hunting for the missing literary critic Abraham D'Yiyef when he becomes embroiled in a murder mystery involving George Bernard Shaw. 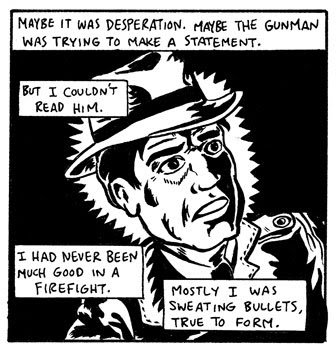 Just to make things harder for ourselves, we also included (in this comics sestina) lines of dialogue from our friends and readers, whom we asked to supply a sentence or two that they'd like to see spoken in a detective story. These lines came to us from John Irwin, Paul Fry, James Cummins, Marie Borroff, H. Stern, and Matt Madden; Jeremy Jacobs, Micah Lapidus, Patrick Denker, and Bill Deresiewicz supplied four other lines that wound up as captions for single-panel cartoons elsewhere in the issue. (That's another one of the bonuses!)

The last story in the issue is our adaptation of chapter 41 of the book of Job, drawn up for this issue and for The Flaming Fire Illustrated Bible simultaneously. The entirety of the adaptation is visible if you follow that link, but Flaming Fire presents the illustrated verses one at a time, and they're also designed to work in page-by-page layouts.

All in all, Satisfactory Comics #6 is 28 pages of hard work, with two bonus comics in its pockets. Because of the extra work involved in making the pockets, supplies are limited. If you want to buy one of the last copies, they're available at our Storenvy shop.

$5.00 may sound kind of steep, but this one is packed with quality. Don't take our word for it: Rob Clough's High-Low Column picked Satisfactory #6 as one of the Ten Great Minicomics of MoCCA 2005!
Posted by Isaac at 5:18 PM