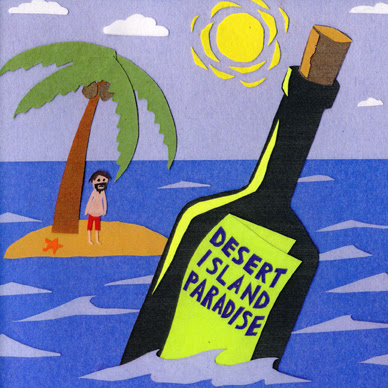 Desert Island Paradise is an anthology for which we were invited to contribute a few single-panel cartoons. The whole 40-page booklet consists of single-panel desert-island cartoons (you know, a castaway in tattered clothes, a single palm tree, an island the size of an area rug -- like the ones in the New Yorker) drawn by minicomics cartoonists -- mostly folks from the West Coast. I think it's really neat to see people like Lark Pien and Jesse Reklaw, whom I've seen working in much longer formats, take a crack at this old chestnut of a genre.

Although our cartoons were drawn up separately, Mike and I did manage to collaborate on our pieces for this book, in a three-stage process: first, we drew up short lists of constraints or prompts for each other -- ways that the joke could be made to work. (For instance, one of them was "many separate desert islands.") Then we submitted proposals to each other for possible jokes, and let the other guy decide which piece we should draw. Or at least that's how I remember it.

I remember, for example, that Mike suggested I should do a joke on the topic of "Desert Island Discs," so I came up with this: 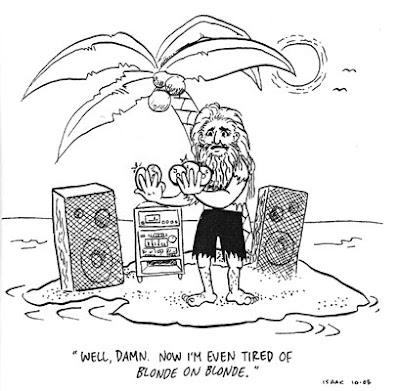 (The joke, at least as I understand it, is that even though it's a great album, some of the songs on Blonde on Blonde get old even before they're finished. I mean, "Visions of Johanna" is more than seven minutes long, and so are two other tracks on the album. So, you know, a Dylan fan might pick that album for a "desert island disk" and then regret the choice on the very first listen. For this guy, it has lasted unreasonably long, and he still eventually got sick of it. Also, it's sort of funny to see a big stereo on such a tiny island, I guess. There: I have explained my joke, so it will never be funny no more.)

One of the prompts I sent to Mike was that the joke should involve anachronism. This is his entry for the book: 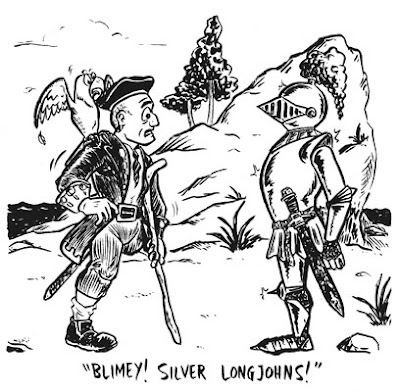 So you see: we've done our duty, and drawn our castaways. There are thirty-eight more cartoons like this, including one more by me, in Desert Island Paradise, and a few of them are bound to make you laugh.

It's a really well-edited and interesting anthology, and we're happy to be a part of it. It'll also probably make for the linkiest post on our entire website, because the contributors to this anthology include (take a deep breath...): Alixopulos, Rina Ayuyang, Gabe Crate, Vanessa Davis, Josh Frankel (who co-edited the book), Fredo, Sam Henderson, Hob, Matt Leunig, Melanie Lewis, Erik Nebel (I think that's the right link), Tom Neely, Onsmith, Lark Pien, Jesse Reklaw, Joe Sayers (the other co-editor), Geoff Vasile, and of course Mike and myself.

I no longer have any spare copies of this book, so I guess it's not for sale here. You can get a copy from Joey Sayers.
Posted by Isaac at 1:33 AM