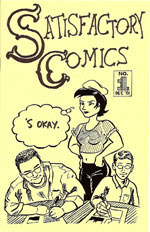 This was our very first joint venture, whipped up in a couple of weeks during the semester break. It's a silly science-fiction story about a "space cartoonist" named Jeanne Photon (hovering over us on the cover). She plops down into a plot that involves Jedis, an amorous ostrich, heavy hallucinations, and a "glowing orange dude" who has created a menagerie on a barren planet. It's pretty fun, and if the cartooning isn't quite top-notch, it's still at least satisfactory.

To make this issue, we ... well, let's let cartoon Isaac and Mike explain it:

Each of those submitted panels came from one of our friends, not all of whom could really draw. When we had the whole set, assembled in a random order, it was hard to see how they might fit together in one story, but we did our level best. We also rolled dice to see where on the page each panel would fall, which meant some slightly odd pacing in places, but turned out to work about as well as we could have hoped. Sometimes I'm torn as to whether this issue represents a fun beginning or an "only for completists" goof, but when I actually read over it, I'm inclined to take a charitable view. It's just such a fun comic!