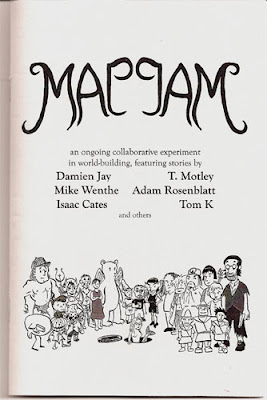 The Mapjam is a collaborative, serialized experiment in worldbuilding. That clears up all your questions, right?

It's actually sort of hard to explain, though I think it's easy to understand once you have the project in your hands. There's a map, which a group of cartoonists created in advance, and it's divided into nine sectors. In each "round" of the mapjam, each of us gets assigned to one sector of the map and tells a story set there. When those are done, each cartoonist is shuffled into a sector where he or she hasn't set a story before, and the process is repeated. Gradually, longer stories evolve out of the connections and continuations from one story to another.

For example: in the first round, our pal Adam Rosenblatt had the central sector, which features Pumpkin Jack's house. He drew Pumpkin Jack as a bear with wings: 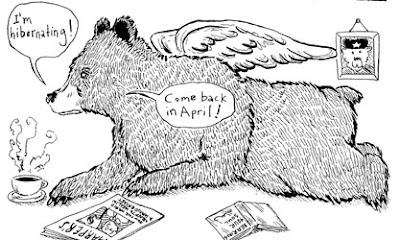 I wound up with that sector in the second round, and started a continuation of Pumpkin Jack's story that explains why he has that name: he can make plants grow, flower, and fruit. (Clicking this picture will make it a little bigger.) 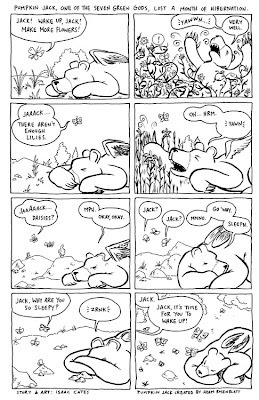 By the end of my story, Pumpkin Jack was sending a couple of other characters off on a quest that resembles something out of the Oz books, trying to find someone to patch up the calendar so that Jack (and everyone else) will stop losing a month's worth of days every year.

Part of the fun of the mapjam is watching different people pick up characters and situations that you've developed. Inevitably, your collaborators take your ideas in a direction you might not have considered. Your characters look different in another cartoonist's hands, but if the cartoonist is reading you carefully, they won't behave too differently. Here's a snippet from Mike's first mapjam story: 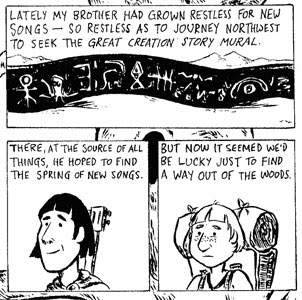 And here's the way these two musicians look in the hands of our friend Damien Jay: 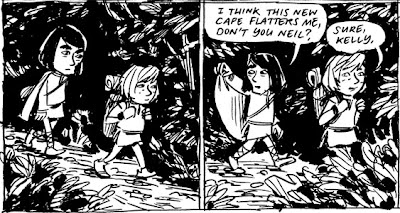 Another big part of the fun for this project is that it has so many different imaginations running in it at the same time. New characters appear in nearly every story, and the minor details in one person's tale can become central in another one. It's hard to predict where the stories will go next. In the upcoming round, will Tom K do more with Tom Motley's "Conan Doyle, Barbarian Detective?" Will he set his story in Harm's Way, on the Random Isthmus, or elsewhere? 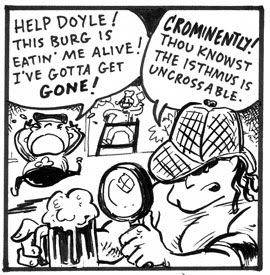 Only Tom K knows the answer to those questions, though I'm pretty sure that in my next piece I'm going to use these four "locals" from his terrific second-round story -- incidental characters who only appear in one panel apiece: 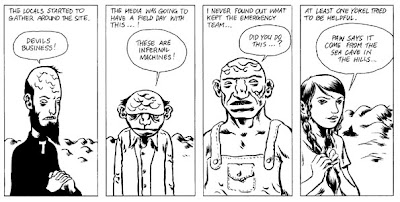 If you want to see more of the Mapjam, Damien's story and Tom Motley's story for the first round are both online at their own websites.

The first two rounds of the Mapjam were available in a forty-page (!) minicomic, but it's out of stock. I'll reprint all the stories when we complete the next round of the jam.

Contributors for the mapjam include Adam Rosenblatt, Tom Motley, Tom K, Damien Jay, Isaac Cates, and Mike Wenthe. The next round will also feature Cathy Leamy, and I've been talking with a couple of other cartoonists about filling the last two spots in the roster.
Posted by Isaac at 12:59 PM