Last week I wrote about our first comics swipe, a panel in Satisfactory Comics #1 featuring Walt Kelly’s Churchy LaFemme. But Churchy is actually the second swipe to appear in that issue, for the immediately preceding panel looks like this: 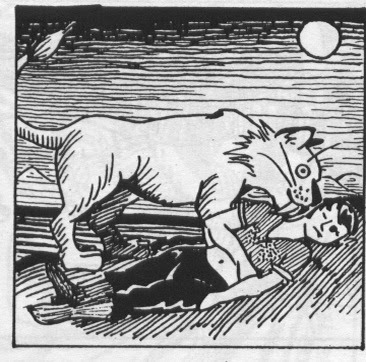 You may recognize the template for this panel from The Sleeping Gypsy, perhaps the best-known painting by Henri Rousseau:

We’re hardly the only cartoonists to have imitated this image; even animated cartoonists have gotten into the act, as The Simpsons featured the painting in the episode “Mom and Pop Art.” Among minicomics artists, Matt Feazell (of Cynicalman fame) has a cute version in his gallery of Stick Figure Masterpieces: 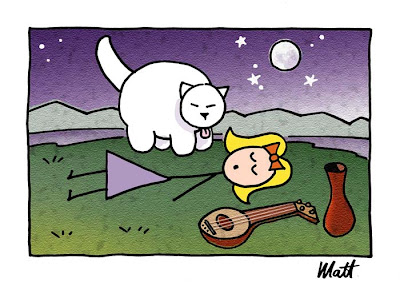 I think it was Isaac who insisted on including at least one swipe from “museum art” as well as one from comics in this inaugural issue of SatCom. As with various other aspects of that issue (both casual and deliberate), museum-art swipes became a standard feature in subsequent issues alongside their cartoon counterparts, though not always so literally alongside as to be in consecutive panels.

You’ll note that our swipe of Rousseau replaces his sleeping gypsy with our own Jeanne Photon. Does that make this swipe a parody? An imitation? Is it more parodic than our seemingly wholesale and respectful swipe of Churchy? But why shouldn’t Churchy be changed by his new context just as Jeanne is changed by hers? How many kinds of swipe are there, and which kinds are questionable (whether ethically, artistically, or legally)?

To ask such questions is to risk the ire of Eddie Campbell, who has both inveighed against “f---in’ definers” and celebrated artistic borrowing. Whether said borrowing be considered theft or not depends on a host of factors and positions. Again I defer further discussion for now (though I recommend reading Campbell’s thoughts on plagiarism); still, the seeming differences between our Rousseau swipe and our Kelly swipe are enough to draw attention to their real similarities as well.

I leave you, in true swipe fashion, by quoting Isaac quoting Auden (from “In Memory of W. B. Yeats”) on the letters page of Satisfactory Comics #7, by way of answering the question of where we get our ideas:

“That’s easy—we get them from other people. Or at least that’s always the way it seems, when we’re working. Some of the ideas are ‘solutions’ for odd contributions from our readers; others are swipes or borrowings from the people we read. Maybe the ideas are ‘ours’ when it’s all said and done: ‘The words of a dead man / Are modified in the guts of the living.’”

—And the lines drawn by one artist look different when swiped by the hand of another.

* * * * * *
Note on sources:
Image of Rousseau's Sleeping Gypsy from the website of the Museum of Modern Art in Manhattan: http://www.moma.org/images/collection/FullSizes/83813003.jpg

Image of Feazell's Sleeping Gypsy from the Stick Figure Masterpieces gallery at www.mattfeazell.com
Posted by Mike at 1:05 AM